The market meltdown in March turned out to be the pivot point for the price of OMG Network (OMG), a token that powers the scaling solution for the Ethereum blockchain and utilizes the plasma protocol, as it had ballooned from $0.3, the price levels seen during the climax of the mentioned crisis, to the two-year high at $9.8 that constitutes the jaw-dropping 450% gain in just 161 days. But, as it always happens after such massive pumps, a strong rejection at the peak of the rally had turned into a full-fledged correction that had eaten away 74% of OMG’s end-of-the-rally value, one of the biggest drops among top-rated altcoins in the past six weeks.

Right now, OMG is priced at $3.35, having lost 4.7% in the past 24 hours, as a part of ongoing retracement that followed the 36% bounce to the upside on the weekly time frame. 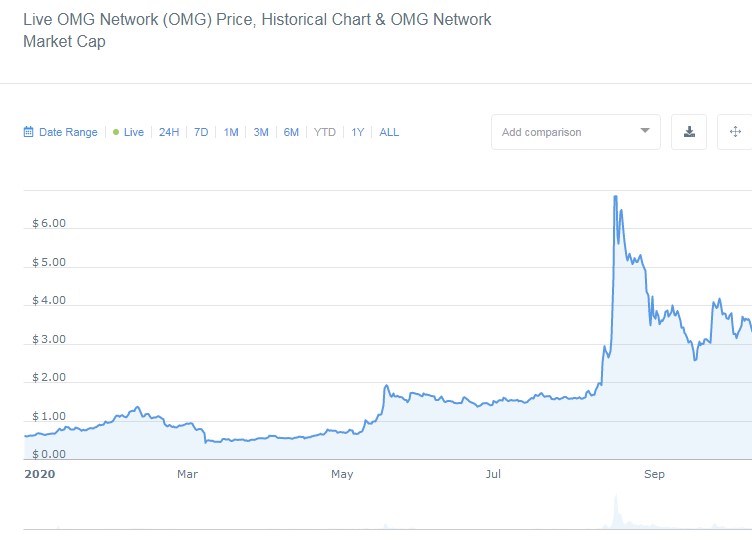 The market capitalization of the 36th altcoin had also taken a big hit during the September selloff and nosedived from $1,044 billion to the current $473 million, one of the biggest drops across the market. We also noted that the average trading volume of OMG has been experiencing fluctuations, going from $95 million on September 27 to $600 million two days later, which points to the significant volatility that the cryptocurrency might endure in the coming weeks.

A consolidation or a rollback to summer price levels?

One of the reasons behind such a massive pump lies in the fact that OMG Network has successfully implemented its solution on the cryptocurrency exchange Bitfinex, allowing traders to deposit and withdraw USDT via that particular blockchain network, which, in turn, should have significantly relieved the congested Ethereum network and reduced the skyrocketing gas fees. 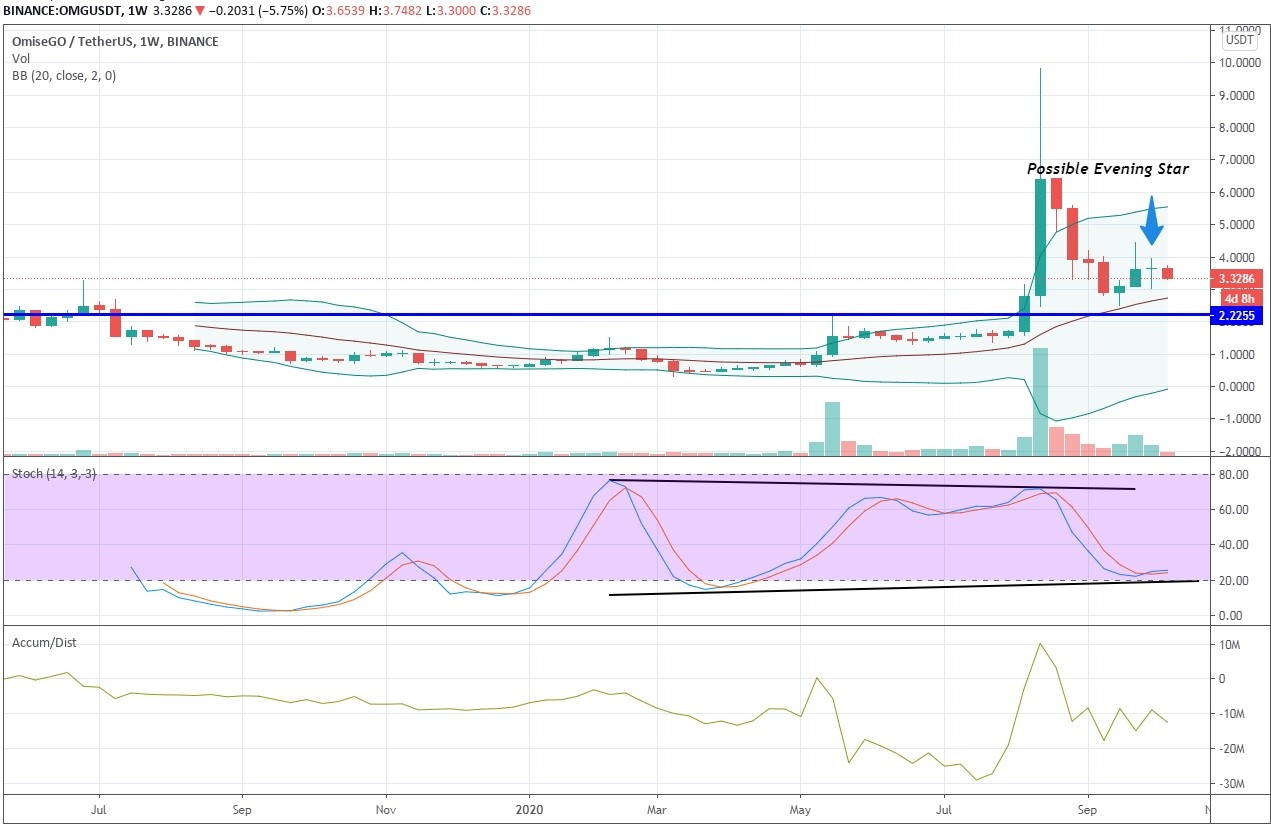 The weekly chart reveals that OMG is now in the retracement mode after three weeks of uninterrupted growth that was instigated by the test of the middle line of Bollinger Bands. The test of the support at $2.44 led to a brief rally that has apparently ended with the evening star pattern, though the price needs to drop to $2.4 or lower this week to confirm that pattern. However, the showings of key indicators aren’t particularly promising for those who expect OMG to turn bullish again.

Although Stochastic displays a weak intention of going to the upside, which would entail some price appreciation, we noticed a hidden bearish divergence that will get stronger if the indicator reverses near 60;

The Accumulation/Distribution indicator has been very choppy, but its overall direction is clear - the price action is supported by the selling volume, so the bearish pressure is likely to intensify in the next four weeks and result in another 30% drop to the support at $2.22, where OMG might begin to consolidate. 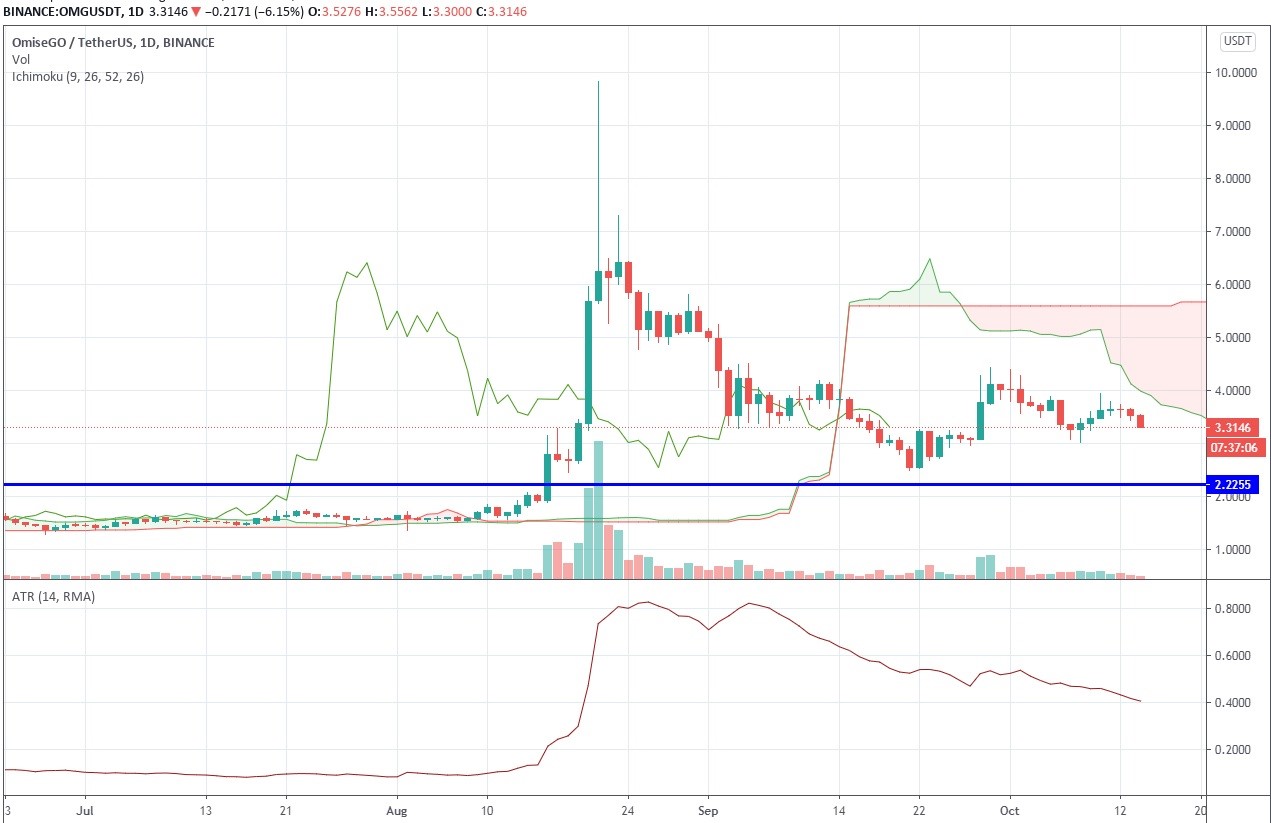 On the daily time frame, The Ichimoku Cloud indicator shows the increasing resistance above the current price action, along with the extending red Kumo cloud, all of which has a bearish bias to it. The ATR indicator is in the neutral zone heading down, signaling about the nearing period of consolidation.