Traders must have already got accustomed to the fact that the proprietary cryptocurrencies of exchange platforms became the stand-along, highly profitable digital assets, capable of putting significant gains over both short and protracted periods of time. Binance Coin (BNB) is obviously the most shining example of a successful exchange-backed coin, but it is not the only one that made both holders and traders a considerable amount of money.

OKB - the exchange coin that stays in the green

OKB (OKB) is a native cryptocurrency of a cryptocurrency exchange OKEx, the headquarters of which reside in the jurisdiction of Malta, with branch offices located in China and Malaysia. From the fundamental standpoint, OKB doesn't have any distinctive differences with Binance Coin or Huobi Token as it provides certain discounts on trading fees, as well as other exclusive privileges, such as the access to the designated merchant program and the right to participate in token sales through platform's own launchpad called OKEx Jumpstart.

The coin was launched in the spring of 2018, and since that time, has had quite an interesting price action that differs from that of the majority of cryptocurrencies. 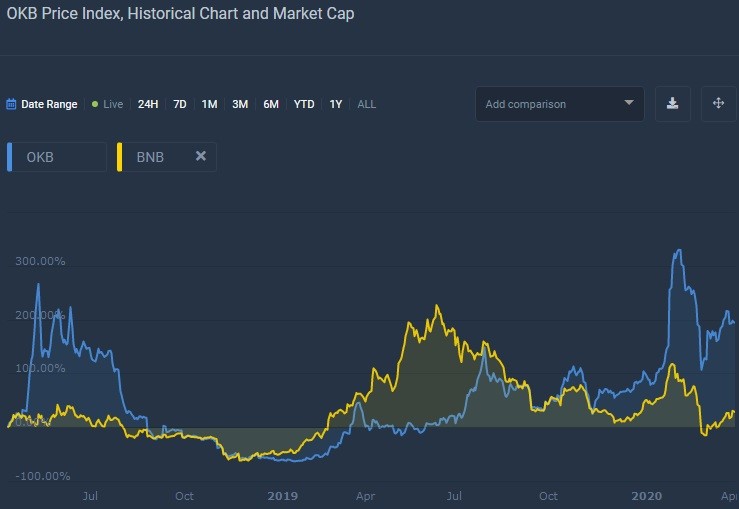 As usual, the coin got a considerable pump right after the release, followed by a gradual yet profound sloping that took the price to its all-time low at $1.25, recorded at the beginning of 2019. That price level turned out to be the very bottom from which OKB initiated an uptrend that still lasts, whereas the overwhelming majority of other cryptocurrencies, including the hyped-up Binance Coin, can't seem to find the way out of the bear market. Those who had faith in OKB, along with a great deal of patience, are now reaping the fruits of the bull market, whereas BNB is going from one lower high to the next. On February 19, OKB reached the all-time high at $7.51, at which point, traders should have secured the profit, but then went into a steep correction that coincided with the notorious Coronavirus Crash.

Nevertheless, OKB still made the lower high, thus maintaining the uptrend structure. Over the past year, the coin has had the triple-figure price appreciation against USD (187%), Bitcoin (110%), and Ethereum (168%. Given that the uptrend is still intact, we expect OKB to reach at least a 50% advantage over these currencies by the end of Q2 of 2020.

The daily OKB/USDT chart reveals another peculiarity regarding the exchange coin, which is that it had entered the crisis with a huge price gap from the close at $5.3 till the next open at $4.5 that marked the rapid descent to $1.9, from which the coin has almost finalized its recovery. 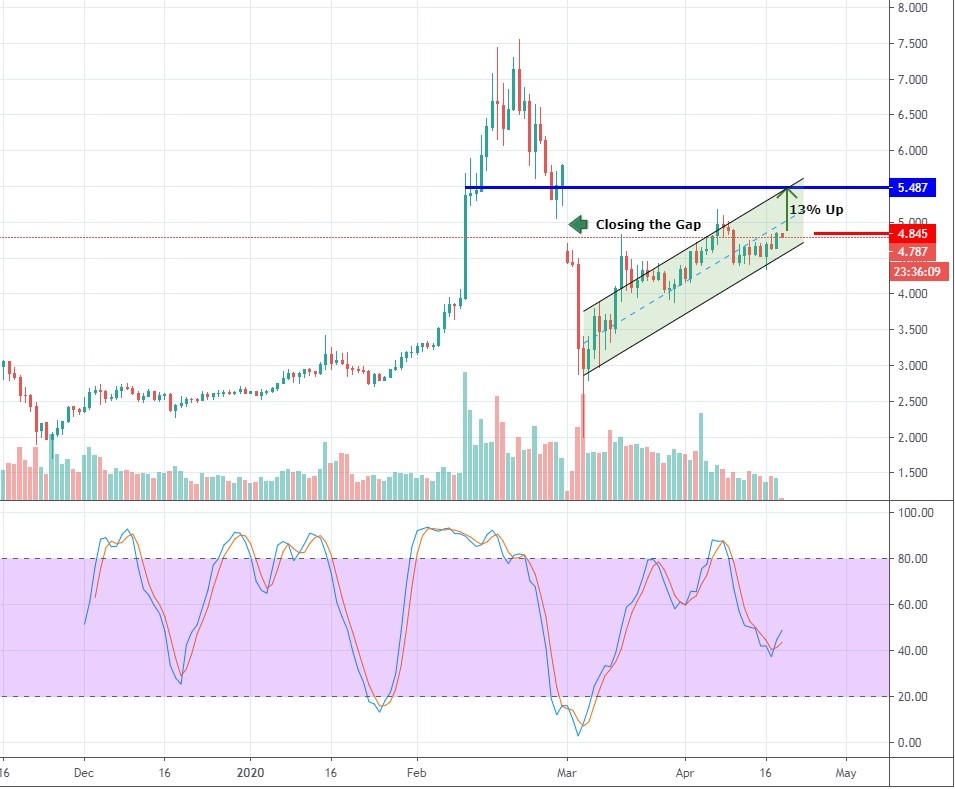 It is safe to assume that OKB will be striving to close that gap before either entering a prolonged consolidation phase, which could happen if the rest of the cryptocurrency market goes sour, or making an attempt to conquer the all-time high at $7.5.

Traders should know that It is still not too late to enter a trade in OKB/USDT as the coin still has to add 13% to the upside in order to fill the said gap. The upward momentum is supported by Stochastic, which has just made a corresponding crossover. Upon that, OKB is likely to retrace to the healthy level at $4.8, re-test $5.4, and then make a frog leap to $7 - $7.5. If you plan on holding this coin till that level, be wary of the double top pattern as it could mark the reversal of the current uptrend.