After a period of intense gains, which started in the last week of August and lasted until September 3, NEM (XEM) saw the structure of a neat uptrend being disrupted by the sellers. On the 3-month chart, the price tested the resistance at $0.16 twice: on the first and third days of September, and then made a sudden reverse to the downside. At the initial stages of correction, XEM established lower lows at $0.107 and $0.1, along with the less distinctive lower highs. 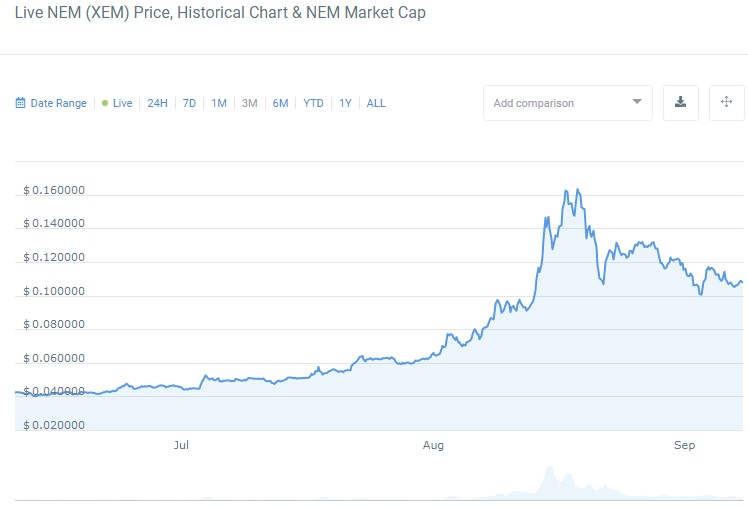 $0.1 served as resistance during the last rally, and we expect it to become a stumbling block on NEM’s path to the downside. Therefore, if you have placed a trade that is already going sour after a sharp reversal, consider cutting your losses at this point because XEM displays numerous signs of downtrend continuation.

The pullback is going to deepen

Upon the violent rejection at $0.17, the peak of the bull rally, reached by the upper wick of the weekly bearish candle, the sellers are pushing the price to the downside in a pattern where a week of intense price drop is followed by a week on indecision (spinning top candlesticks). 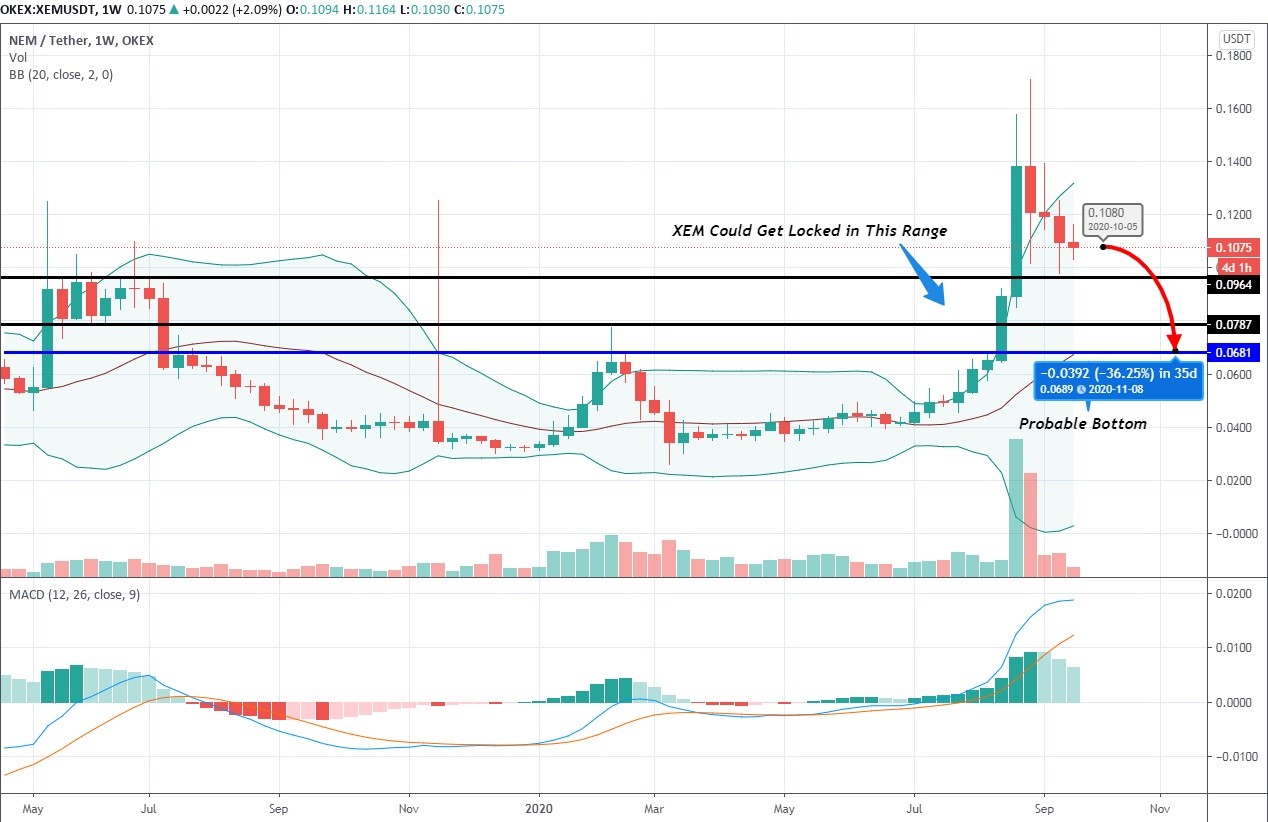 The bearish price action is taking place on the backdrop of a substantial decrease in trading volume. Statistics tell us that the average trading volume of NEM has melted down from $230 million to $30 million, which means that the period of high volatility is nearing its end - also confirmed by the degree of extension of Bollinger Bands - and the price is likely to into a range. According to our analysis of XEM’s historical price action, this range is likely to emerge between $0.78 and $$0.96 - the area where the price had stalled during the previous few months of action. However, MACD suggests that the ultimate descend could be deeper than the designated area since the recently commenced bearish momentum has only begun to gain its strength.

The most probable bearish scenario dictates that NEM is going to be pulled to the middle line of Bollinger Bands that converges with the support level at $0.68. But before that, we could see at least two bounces to the upside - from $0.1 and $0.78 - that might extend to 7% - 10%, followed by a more significant depreciation.

The daily chart shows the price moving in a tight descending channel and testing the 50-period EMA. Here we might actually see the first of the mentioned bounces to the upside that should coincide with the presumed rejection of the MACD’s main line at the zero line. 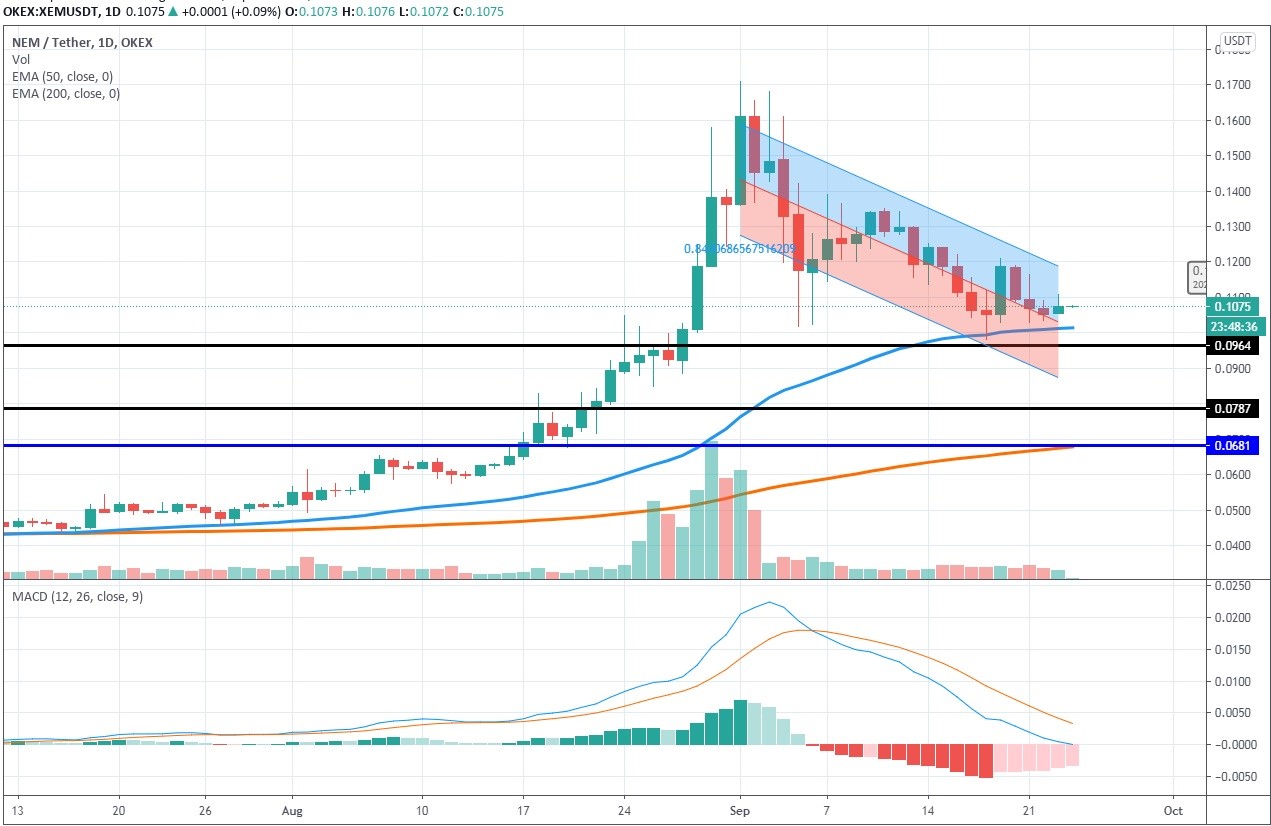 NEM is bearish against Bitcoin

Despite the fact that XEM has had a decent performance against Bitcoin in the past month: the altcoin gained 45.6%, it has also seen a bearish reversal from 1500 satoshis that resulted in a harder drop than that seen in the USDT market. 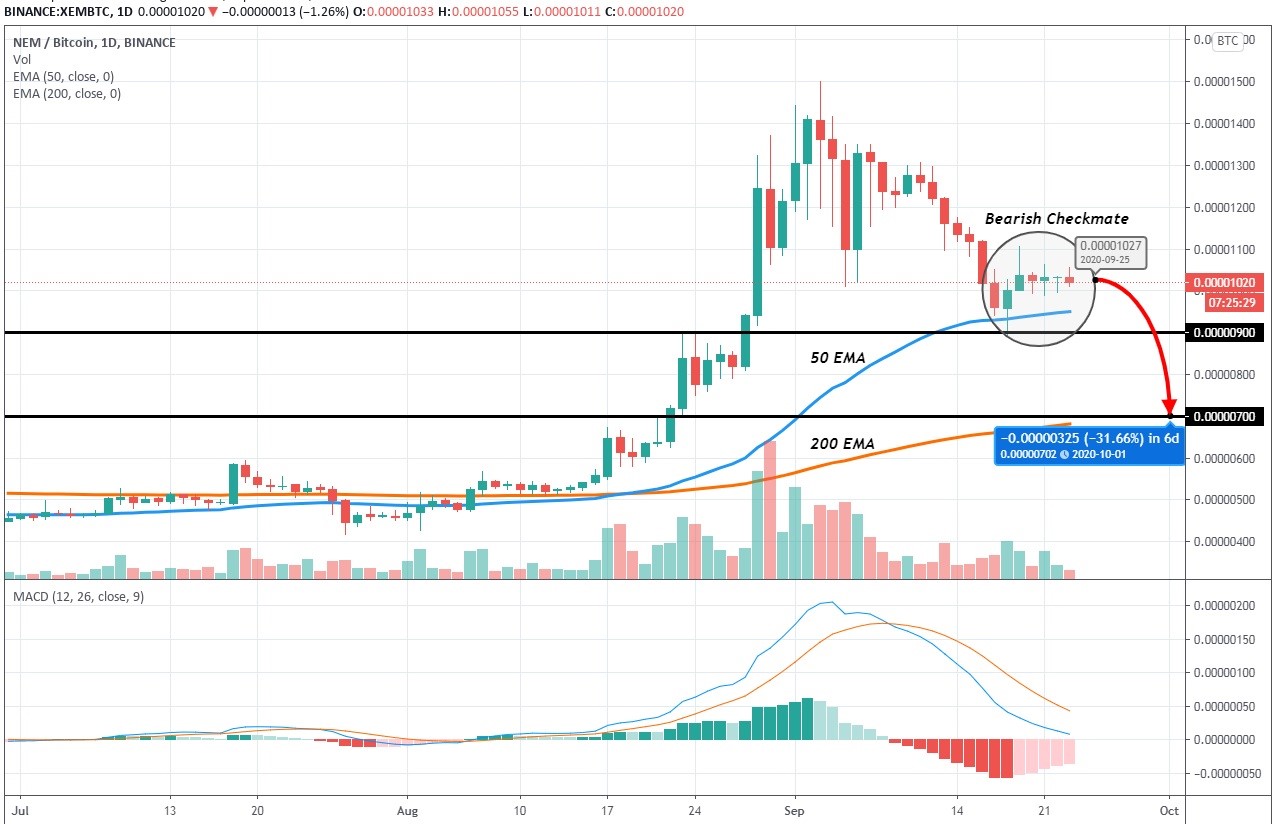 Here we see the formation of the pattern that resembles the bearish checkmate that has all the prerequisites: the tightening volatility on the back of falling MACD, for the continuation of correction to 700 satoshis.