The 26th cryptocurrency has had a rough couple of weeks, just like the rest of the market, after taking a serious hit from the bears upon reaching the peak of the minor uptrend at $0.008. The downfall of XEM began with the inverted hammer pattern that formed on the daily time frame on February 12. The further price decline was quite easy to predict as the next move constituted the bearish engulfing candle that was substantiated by the formation of the notorious death cross, as the 50-day moving average penetrated the 200-day to the downside on February 15. 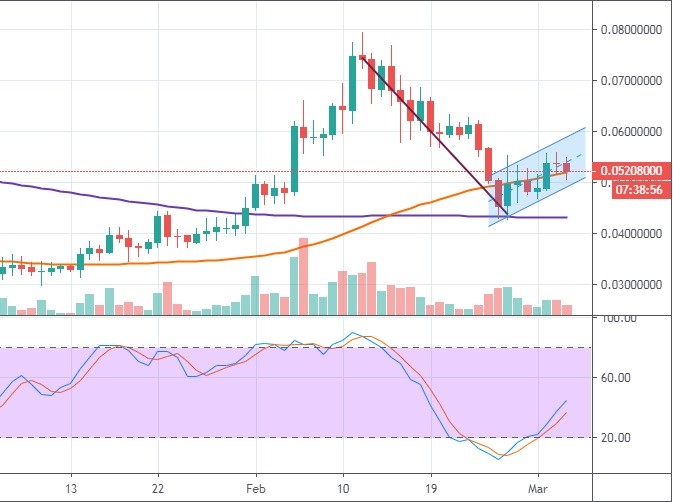 What followed was the 37% price drop after a close at $0.067 on the said candle, at the latest stage of which NEM has briefly descended below the 200MA but found the support provided by the 50MA.

However, it’s far too early to tell whether the current action represents a recovery or just a retracement before a further move south. Here we can see how the price struggles to rise definitively above the long-term moving average, with the latest attempt being instantly negated by the bears. The candle that shows traders’ remorse, as well as the following one, tells us that there is still no consensus between the buyers and the sellers regarding the new price of NEM. Moreover, the last couple of days were characterized by the higher-than-average selling volume, which could force XEM below the 200MA yet again, which would result in another testing of the 50 MA at $0.41 - $0.42.

The entire price movement since the correction appears to be forming the bearish flag pattern that points at the probable continuation of the downtrend on the daily time frame, instigated by the mentioned death cross.

If this scenario plays out, XEM would break through the 50MA and below $0.04, thus literally erasing all of its gains from the past couple of months. The bearish intentions of NEM are also encouraged by the unceasing panic across all markets - cryptocurrency and conventional alike - caused by the spread of coronavirus.

The described scenario could be canceled only if, in the next few days, the price establishes a foothold above the said moving averages and breach the depicted parallel channel to the upside. However, the fact that the Stochastic has fallen to its lowest level (4.41 on February 16), since February of last year could mean that XEM is on the verge of a solid upward maneuver that could even revive the uptrend structure. 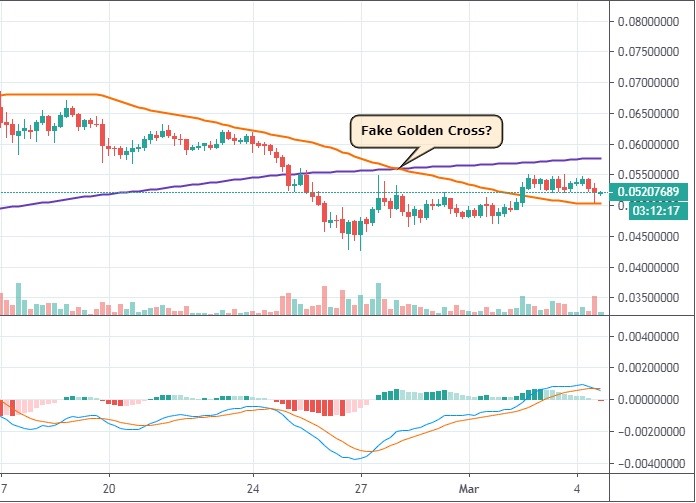 In the 4-hour time frame, we see what appears to be a fake golden cross that occurred on February 28, given that the price has so far failed to break through the pre-pattern resistance at $0.055 and shows the signs of increasing sell volume.

However, the appearance of the cross did manage to drag MACD from below the zero level to 0.001 for a while, though now it has already made a crossover to the downside, which means that XEM could well be pulled down below the 200MA to $0.045.

To summarize, NEM is currently at the crossroads, though most indicators show that the coin intends to dig even deeper. Watch for its movement around the moving averages to determine your current or future trading strategy involving XEM.