Fundamentally, NANO is an attractive cryptocurrency because it was built on the foundation of the block-lattice ledger that provides for improved scalability and throughput due to the presence of independent blockchains. Its PoW algorithm doesn’t require a lot of computation power, which makes running the Nano nodes more affordable. The transactions involving the currency itself are carried out on a no-fee basis and at the superbly high speed.

However, the absence of fees is also a clink in NANO’s armor because it implies that those who operate the nodes are not properly compensated for the contribution or punished for abusive practices. In the future, that factor could be detrimental to both the ecosystem and the price of NANO.

NANO hangs in the balance

Even though the coin can’t be characterized as overly volatile, its average daily trading volume is very unstable, capable of swinging from $2,1 million to 12,3 million over the course of the week. But the daily chart below shows that even the rapid spikes of volume rarely translates to a powerful price action, which means that there is an underlying balance between the bulls and the bears in this particular market. 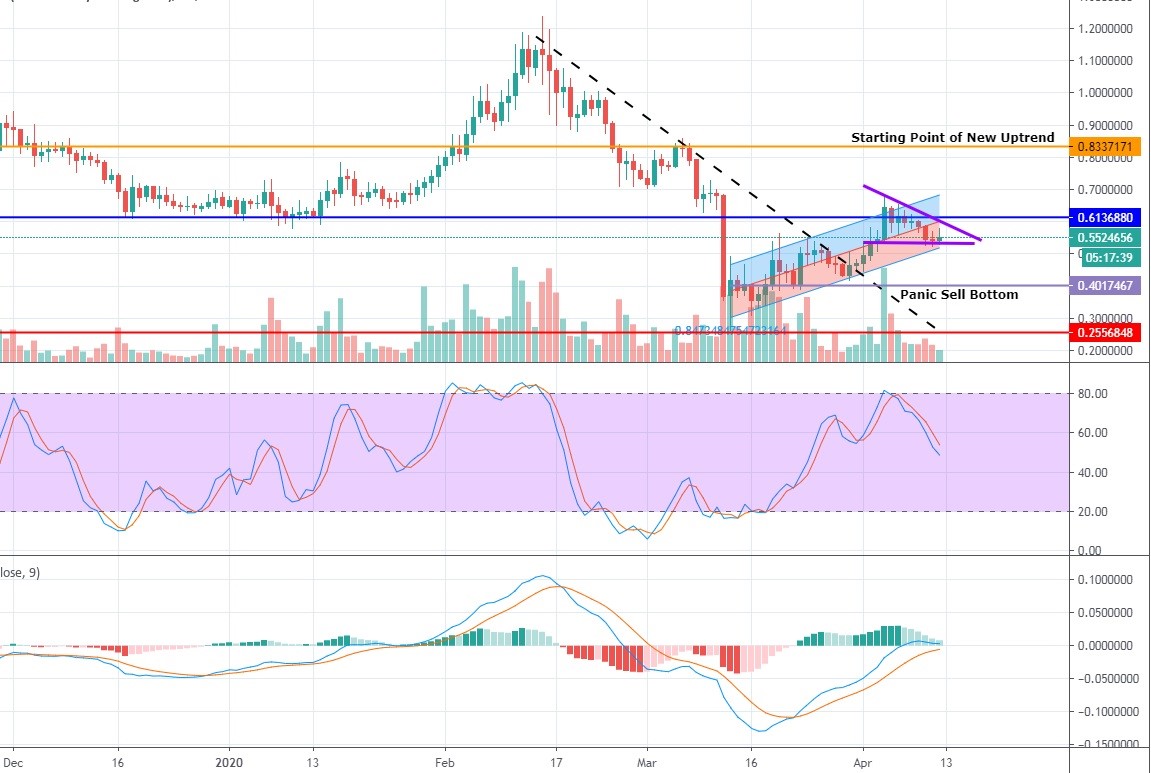 Right now, we have NANO and its lowest price levels since 2017, with $0.61 being the first resistance of that period from which the price got rejected at the end of the longest bullish rally since the Coronavirus Crash, which lasted for six days. Upon reaching the interim low at  $0.25, Nano has been building up its strength by moving in an accurate upward channel, although this move could stall for a bit due to the price being unable to penetrate the aforementioned resistance for a while. This could signify the emergence of the horizontal wedge formation, which NANO could hold for a few days if it continues to respect the support at $0.52.

On the macro level, the 60th cryptocurrency has already disrupted the local downtrend structure, though it is still too early to declare a full-bodied trend reversal. In order to achieve that, the price has to rise above the level at $0.83 - the last lower high before the crash.

And while the upward move remains a possibility, technical indicators suggest that traders should be prepared for a further price reduction in the coming days. Stochastic is aiming for 40 with no visible intentions of crossing over; MACD has been rejected at zero - its line about to cross the fast one under, which hints at the approaching bearish phase.

In addition, traders should be mindful of the events related to the COVID-19 pandemic, as the US President has just declared the state of a major disaster that could potentially cause the second wave of panic in the markets, including the cryptocurrency one. In that case, the price decline of up to 25% might occur in the next couple of days and take Nano down to $0.4. Therefore, it’s better to have a stop-loss in place - just below the current support.