The old-timer NANO - the coin that was launched way back in 2015 - might not appear too often in the portfolios of traders who pay attention only to the mainstream cryptocurrencies, but it is undoubtedly one of the most respectable providers of return on investment as its all-time showings have long gone above 9000%.

The fundamentals behind Nano

Fundamentally, NANO is in the same alley as some of the top cryptocurrencies. The London-based blockchain project stands behind the creation of the self-proclaimed digital money of the new world. The ecosystem behind Nano was designed with the purpose of resolving the existing issues concerning cryptographic currencies, such as high network fees, proper decentralization, and swiftness of execution of transactions. Besides, this system offers a different incentive model for its participants - in fact, they are not being paid for maintaining the network at all times, like other blockchain systems do, thus decreasing the chances of centralization.

Nano’s price has shown historically to be sensitive to different system upgrades and other fundamental improvements. Therefore, traders who are interested in this cryptocurrency should be aware of the fact that its team is about to introduce the V21 Athena, which represents the upgraded version of the system’s node software. In addition, the company has recently launched the Nano Wallets and enabled coin purchases with banking cards via Atomic Wallet.

These are the reasons why the price of Nano exploded over the last month and a half, having gained more than 65% in the given period of time, and now showing great potential for moving even higher. 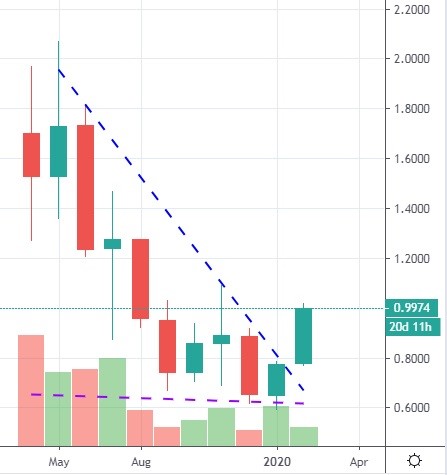 The price had jumped out of the descending triangle with a slight breakaway gap that hints at dominating bullish sentiment on this market. It is now making efforts to form the three advancing soldiers’ pattern. The success in this endeavor would mean that NANO could step on a path towards breaking the high of the previous year, which was registered just above $2. 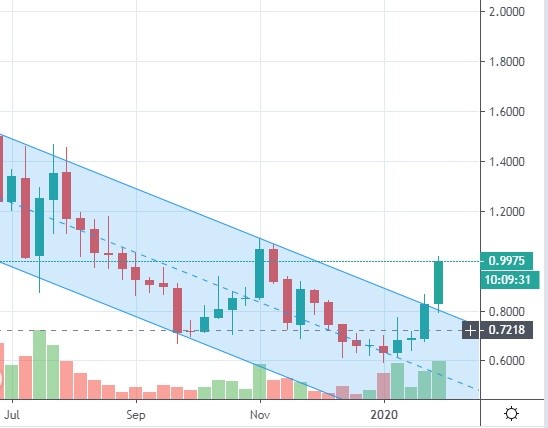 The weekly chart demonstrates NANO’s successful escape from the descending channel, followed by a very bullish traders’ remorse since the breakout candle is being formed on the background of heavy buying volume. If by the end of the week Nano stays above the channel line and maintains the size, then traders could begin devising tactics for the uptrend in this pair. This scenario could be canceled if the price drops below $0.8 and flips the volume to a selling one. The 14-period RSI on that time frame has only slightly surpassed 50, leaving the coin plenty of space for the upside maneuver. 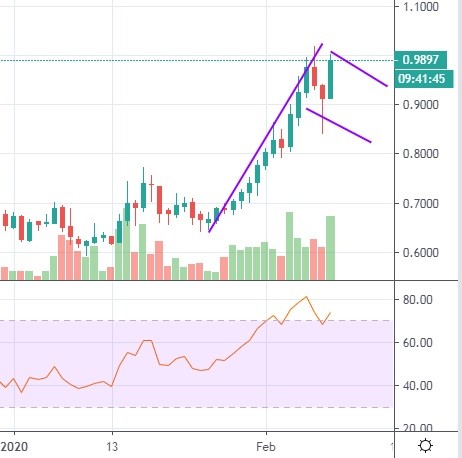 The 1-day chart looks very bullish as NANO has been putting gains for nearly ten days, following the emergence of the morning star pattern on the charts. Right now, we are looking at the first stages of development of the bullish pennant, a continuation pattern, which means that the trend is likely to continue moving to the upside after a stage of retracement. During that time, the price could drop to $0.8, so make sure to place stop-losses lower with regard to that level. Should the bullish rally persist, NANO could easily go above $1 and turn this resistance into support.

Bitcoin Cash is one of the most widely known forks of the original Bitcoin blockchain there is. The cryptocurrency came about from a frustration in the way Bitcoin...

In our previous BAT price prediction article, we warned about the approaching correction that must take the price down by at least 20% in two weeks. That is precisely...

It’s dark time now for the hard fork of Ethereum as this altcoin has suffered the third 51% attack in a span of a few months. In our last ETC price prediction article...

In our previous Dogecoin (DOGE) price prediction article, we described the artificial bull rally organized by Tick Tock users who tried to pump the price to $10 in a classic...

The cryptocurrency industry is a wild world where just about anything goes. New projects are popping up nearly each and every day, with the majority of them set on building...

Neo (NEO) is one of those altcoins that have dealt reasonably well with the recent price dump since it has already made a bullish reversal, which is seen clearly...

Synthetix Network (SNX) has long been considered one of the heavyweights in the rapidly rising sector of decentralized finance (DeFi), alongside such names as Aave...

In the cryptocurrency space there is a lot of room for run of the mill digital assets like Bitcoin, but there is also a growing space for coins and protocols intended to advance...