The latest occurrences in the altcoin market have been like a hotchpotch of explosive bullish price action on the part of such coins as Elrond (ERD) and Stratis (STRAT) and dull ranging, displayed by Monero (XMR) and other highly-ranked cryptocurrencies.

The dollar value of XMR, for instance, remained unchanged during the past month, while its performance in a pair with Bitcoin brought only a moderate 5% gain over the same period. This stagnation was probably caused by the high correlation between the price behavior of Monero and the dominant cryptocurrency, with the estimated coefficient of 0.89, having increased significantly after the meltdown in March. 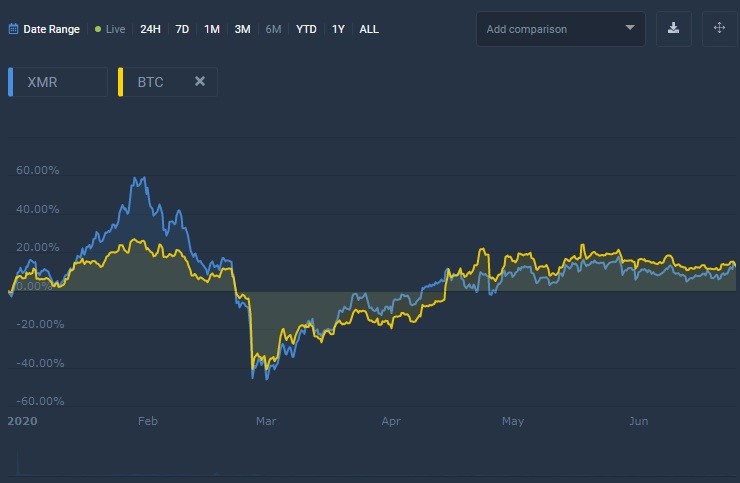 It could lead to a conclusion that traders shouldn’t expect a sudden bull rally from Monero anytime soon, or at least until Bitcoin gets out of its limbo, but it could turn out to be premature. We have already analyzed that BTC shows signs of leaning towards the bearish side, which aren’t as evident in the XMR market. In fact, we might see an example of a considerable discrepancy in price action between the two cryptocurrencies as the privacy coin has been visibly bullish during the past three days.

Could Monero finally get bullish on Bitcoin?

The daily XMR/BTC time frame shows that Monero has broken the long-standing resistance at 710,000 satoshis that kept the price under the lid since March. The breach of resistance also coincided with the rise of MACD above the zero line and a bounce off the signal line without crossing it to the downside. 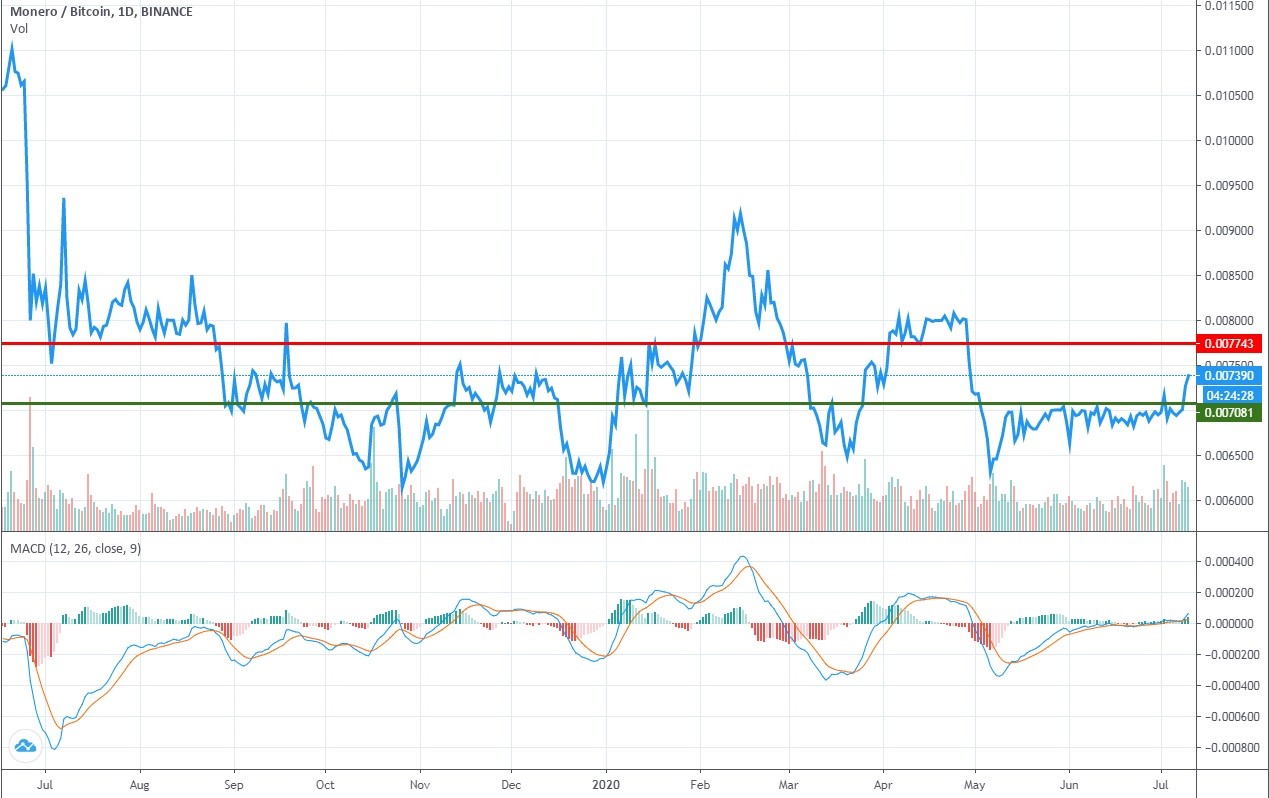 Actually, it was the first time this indicator became bullish since the middle of May, so traders might expect another 5% move to the upside in the next week to ten days that will run out of steam at 770,000 satoshis, at which point the price will get rejected since that resistance appears to be too tough.

To summarize, this market offers a good chance for a short-term trade with entry at 730,000 sats and exit at 770,000 sats. But should BTC decide to show some signs of life, the bullish scenario will be canceled, and the price would once again get pulled to 700,000 sats.

Another attempt at breaking the range

Monero has been locked between the 0.5 and 0.618 Fibonacci levels, or $63 and $70, for the past 45 days. This period coincided with the formation of minor bearish divergences on both MACD and RSI that signals traders about the possibility of a significant price drop after the price gets rejected either at $70 or $75, depending on the strength of the ongoing bullish impulse. 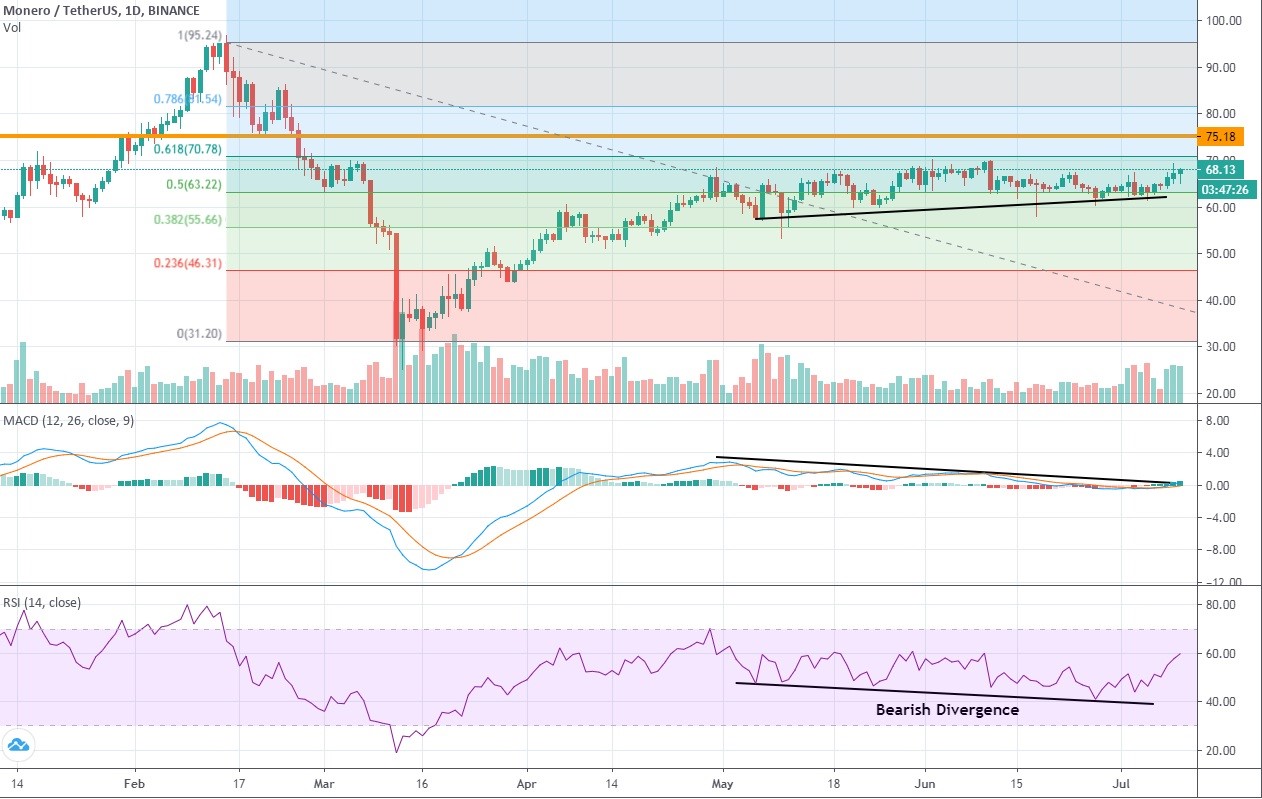 The analysis of volume profile shows that the bulls are having their moment right now as the buying volume has been on the rise during the last three days, though it didn’t exceed the volume showcased during the previous ten upswings that haven’t been particularly significant.

Even though Monero presently displays a flash of bullish price action, we reckon that it won’t last, and the bears will begin to apply pressure once the price hits $70.