The recent unexpected selloff that happened at the dawn of September has had quite a negative impact on the price of the privacy coin under review. Monero (XMR) took a big 30% hit from the bears that knocked the price from $105 to $73 in less than two weeks.

The coin that is presently ranked 19th, with the market capitalization of $1.53 billion, now stands at $86.5 on the backdrop of the 3% price appreciation achieved in the last 24 hours. Monero’s performance profile below suggests that the cryptocurrency is doing reasonably well, especially against USD and Bitcoin.

The uptrend could still be saved

However, nearly all of XMR’s bullish initiatives of late were hindered significantly by the unceasing opposition from financial authorities that led to several delistings from cryptocurrency exchanges. Nevertheless, the privacy coin is still in great demand from users and traders alike, which is confirmed by the soaring average trading volume that increased to $23 billion over the past couple of days. The notable growth of trading volume coincided with a bounce from the support level at $75 that was tested by the biggest weekly red candle since the horrendous market crash in March. But contrary to its behavior during the COVID-19 crisis, Monero is now displaying signs of immediate recovery, which, if maintained, would deny the most pessimistic scenarios painted by numerous cryptocurrency experts.

The analysis of price action on the weekly time frame concludes that XMR is drawing a healthy uptrend after penetrating the macro resistance at $71. The bulls have absorbed the heavy punch from the bears and are now pushing aggressively to the upside, in an effort to establish a proper lower high that would keep the overall uptrend structure relatively undamaged. 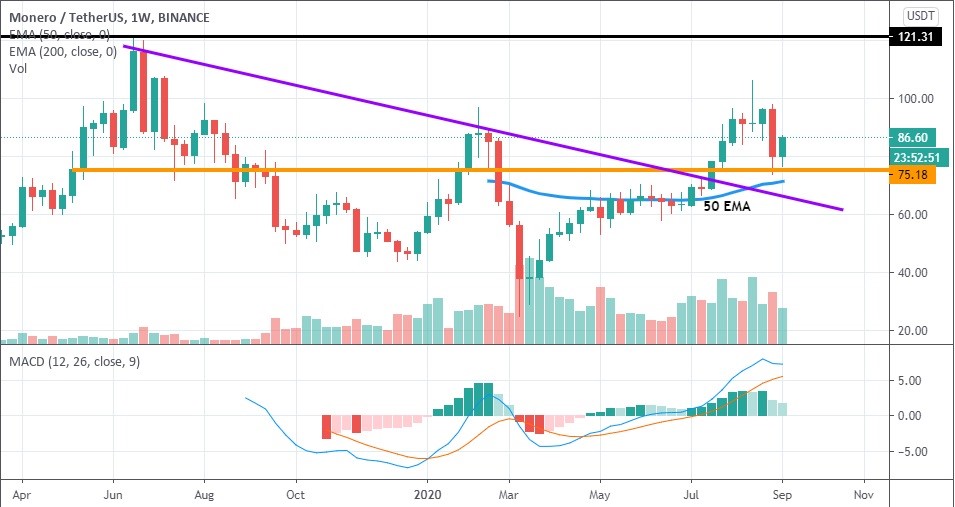 Another positive aspect of Monero’s price action is that the buyers kept it above the 50-period exponential moving average even during the flash crash when many higher-ranked cryptocurrencies fell past not only 50 EMA but also the trend-determining 200 EMA that brought traders who had long positions but missed the bearish reversal to the edge of their seats.

However, it’s still too early to tell the tales of uptrend continuation because there is a reasonably high chance that things could go sour for Monero, and the cryptocurrency market in general, since the world seems to be entering the second phase of the coronavirus pandemic, the bullish sentiment on traditional markets is unsustainable - all these concerns are seasoned with the upcoming presidential elections in the United States. Given the growing correlation between the S&P 500 index and Bitcoin, another crisis on Wall Street could make it March-all-over-again for cryptocurrencies, Monero included. Therefore, always make sure to have a stop-loss in place, regardless of your trading style and preferences.

The position of MACD suggests that the bullish momentum is far from being extinguished since the bearish initiative has failed to bring its MA’s close to the corresponding crossover, so the lines stayed visibly apart from each other, which raises the probability of a more persistent advance from the bulls in the coming three to four weeks.

For the upcoming upside move, we have established the profit target at $120, a psychological price level that also happens to be the top of the bull rally in 2019.