The year 2020 began very optimistically for alternative cryptocurrencies that have been eating up the market capital, forcing the Bitcoin domination to decline almost to 60%. One of the coins which have been enjoying a smooth rise of its price is Monero, one of the three most recognizable privacy coins. Despite the regulatory bodies of the European Union and several other countries trying to force Monero into submission, the 15th cryptocurrency is thriving as a trading instrument.

Starting from the first days of January, XMR has been rising dynamically, adding a little over 116% to its value. At the outset of 2020, Monero was valued at $44, which was the 360-days’ low, when its southward journey was ended by a slightly disrupted bullish pattern of three advancing soldiers. Once the pattern was concluded, it had taken the price above the initial resistance at $56, turning it into support along the way - a textbook bullish move that initiates trend reversal.

Traders who began dealing with Monero at that time must have appreciated how the coin had been methodically breaking through the historical resistance levels, taking some time to consolidate in very distinctive trading zones. Apart from one relatively deep retracement, which had yet again taken the price to the predetermined support level, XMR has been soaring up high almost relentlessly, especially in the period from January 24 to February 14, going up from $58 to $97 to establish the 6-month high.

Too strong to provide profit-taking

However, such a ceaseless price surge presents fewer opportunities for profit-taking as XMR practically hadn’t had any retracements in the said period of time, though the coin holders must have been overjoyed with this scenario. But since Monero wasn’t eager to go into retracement on its own accord, the cryptocurrency market organized one for it by crashing notably across the board.

On February 15, it went down by 12%, penetrating the 22-period EMA to the downside and opening below it on the next day. This move saw XMR establishing an interim resistance at $95, having successfully made the higher high. The question now is whether the ongoing drawback in an uptrend would result in a normal retracement, which Monero has been longing for, or would there be a consolidation or even a trend reversal?

A further pullback remains a possibility

Right now, the market is at the crossroads as there’s still a shortage of signs regarding its further intentions. In the worst-case scenario, we are now looking at the inception of the 123 trend reverse pattern on a daily chart, though the price is still high enough to bounce back and form the higher low. 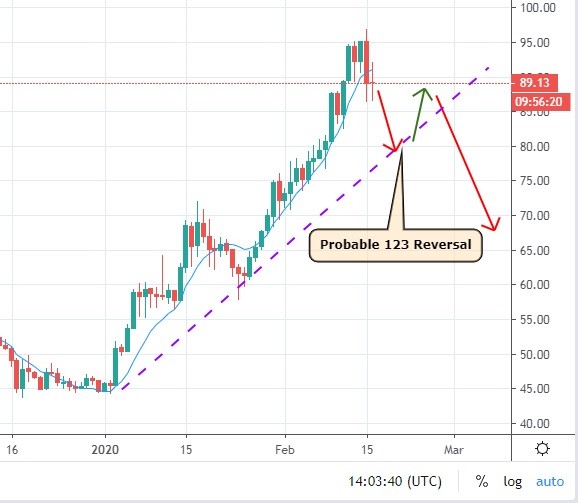 Judging from the fact that the bears could still push the price much lower, we could expect the support line to be at $80 - at that particular spot, the vertical and horizontal support lines are converging, adding to the appeal of that region. $80 would be a crucial area for Monero because it opens the way to a strong move in either direction, which calls for a mandatory placement of a stop-loss. Should the reversal get canceled, Monero would breach through the psychological level at $100 in a span of several days.