Monero (XMR) is the 13th largest cryptocurrency by market cap, and the last one whose market cap sits above $1 billion at the time of writing. It is also the biggest privacy coin in the crypto industry, with a daily trading volume of $169.3 million. While this pales in comparison to the likes of BTC or ETH, it is still quite impressive for a privacy coin, as not a lot of exchanges support them.

In terms of its price, however, XMR currently sees a 1.58% drop, with its price sitting at $58.18. However, with November entering its second half and the end of the year on the horizon, many might be wondering what is in store for XMR? Is it a good investment at this time, and whether or not its price will see a surge in the last days of 2019? To find some sort of answer to that, let's first examine the coin's performance in recent years.

Monero is one of the older coins in the crypto market, especially when it comes to those that are still around. It was created before Ethereum, meaning that the trend of launching ERC-20 model-based tokens was not around for another year. Instead, Monero was built from scratch, with technology that intended to provide users with greater privacy features.

Even so, the coin's price remained barely above $0 for several years. One important distinction from many other coins that were brought to their heights in late 2017 is that XMR actually started attracting attention way before the famous surge. It climbed past $1 as far back as in June 2016, slowly but surely carving its way up during the following 12 months, or so.

It started participating in real, Bitcoin-led surges around August 2017, and it reached its ATH of $450 twice, which is another thing that makes it unique. The first time was on December 21st, 2017, and the second one was around January 5th, 2018. Between these two surges, there is a noticeable drop, indicating that its price was rejected twice by this resistance and that XMR was willing to go even higher. 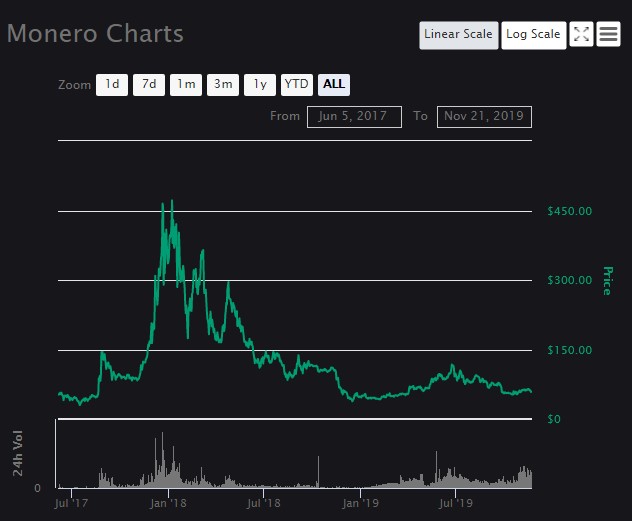 In months that followed, the coin experienced the same  as pretty much all other cryptos — it suffered a severe drop (to $150), it tried to fight it for a while through large fluctuations (between $150 and $300), it eventually broke its support, and it found a bottom (at $100). Then, that bottom was broken too, in November 2018, and XMR dropped to where it is right now. It did participate in bull runs in mid-2019, however, but just like most others, it returned to its established bottom after only a few months of growth.

What to expect from XMR?

To put it simply, Monero seems to be in line with the majority of the market, and it waits for BTC to make the first move and start leading another bull run. The coin had shown incentive back in 2016, but the sudden rise of the crypto market grasped it and made it obey the overall sentiment, rather than follow its own path.

XMR stood in line ever since, which likely also protected it from a negative stance towards privacy coins in recent years. However, this also indicates that XMR will not try a random bull run of its own in the near future. Instead, it seems to be marked by relative stability, which is only occasionally interrupted, but only when the whole market makes a move.