Even though Monero (XMR) and other privacy coins exist under constant threat of being put under the heel by financial regulators, this particular one has been doing incredibly well lately, especially during the recent two dumps (in the first weeks of September and October), when the entire cryptocurrency market had deflated by an average of 20%.

Monero’s outstanding performance becomes evident when its price action from the past ninety days is compared to that of two leading altcoins: Ethereum (ETH) and Ripple (XRP). 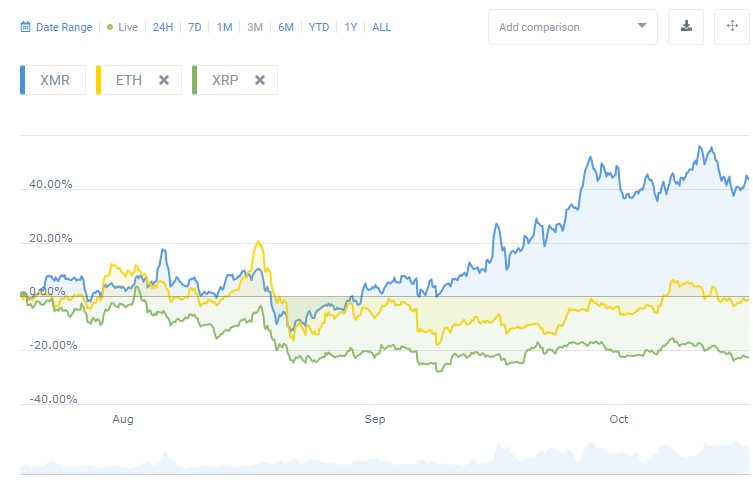 And while the altcoin market had been tumbling down, with all those overhyped DeFi coins crashing the respective uptrend structures, Monero had never left its comfortable ascending channel, though it had also retraced by 23.5% at the dawn of September, and then went on to break the said channel to the upside, along with the macro resistance at $118. Upon that, the price had briefly tested $140 but got rejected to the area of support.

Right now, XMR is traded at $124.8 on the back of the 22.5% rise against USD in the past month, though it has rolled back by 6% over the last week. Certainly, it’s nowhere near the all-time high at $594, but the progress to the upside, and the subsequent emergence of a secondary uptrend, is undeniable.

But the question is whether we’ll see a relatively flat consolidation around $118, or would the sellers initiate a deep retracement, or even a correction, that would be instigated by the rising Bitcoin dominance?

Consolidation with the hints at retracement 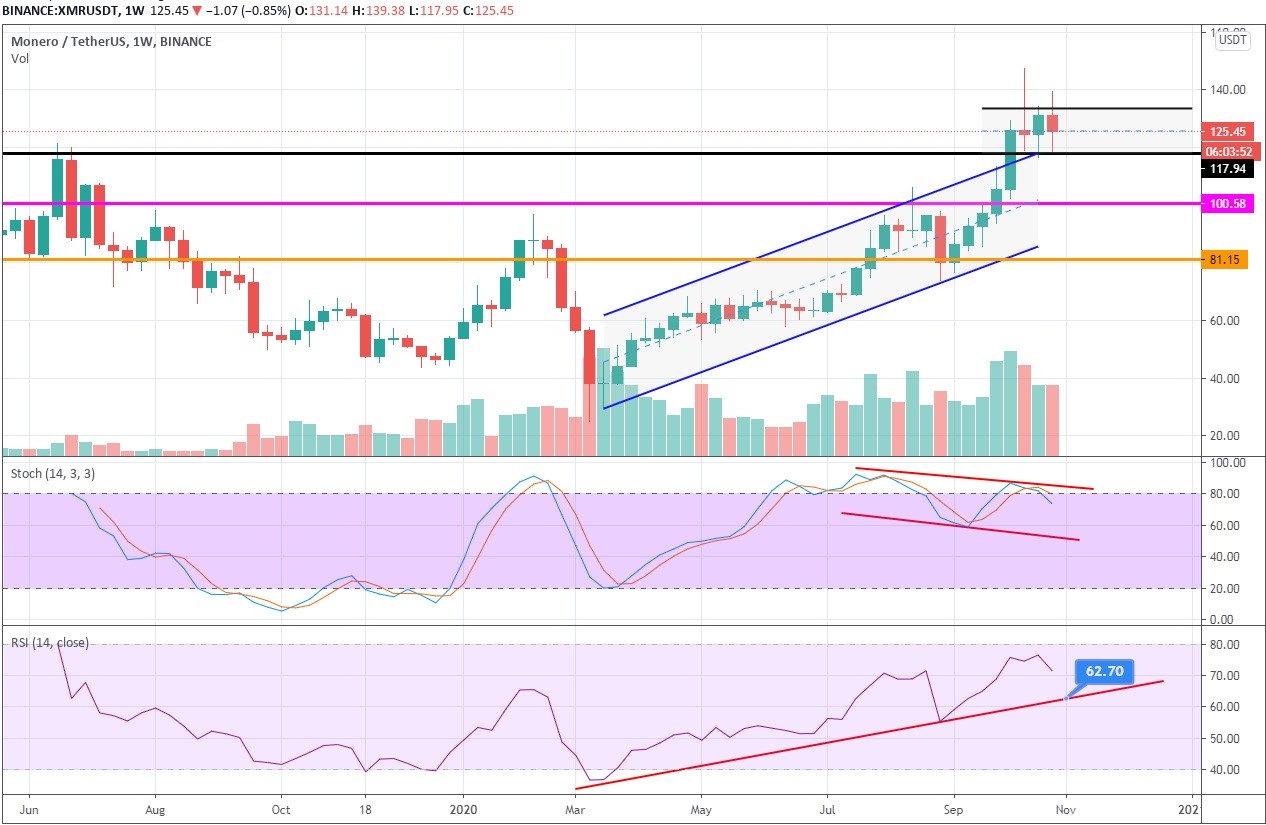 Monero has been forming a very shallow retracement over the past three weeks, which usually serves as a sign of uptrend continuation. However, we see that the Bollinger Bands are open broadly, so the possibility of a pullback to the middle line, which usually occurs after the price penetrates the upper band, remains quite high. If that move is to occur, XMR would drop to $100, the area that still constitutes the proper higher low, so the uptrend structure would remain intact.

Our expectation of approaching pullback is confirmed by Stochastic that has formed a distinctive bearish divergence while traveling from the overbought area back into the neutral zone. The RSI, on the other hand, has been flowing to the upside without any divergences, though it can easily afford a drop to 63 without endangering the uptrend.

But given how strongly the buyers seem to be protecting the support, XMR might well remain inside the consolidation channel, established between $134 and $118, for the next several weeks. The most negative bearish scenario provides for a rapid drop to $80 that would leave the uptrend hanging by a thread. 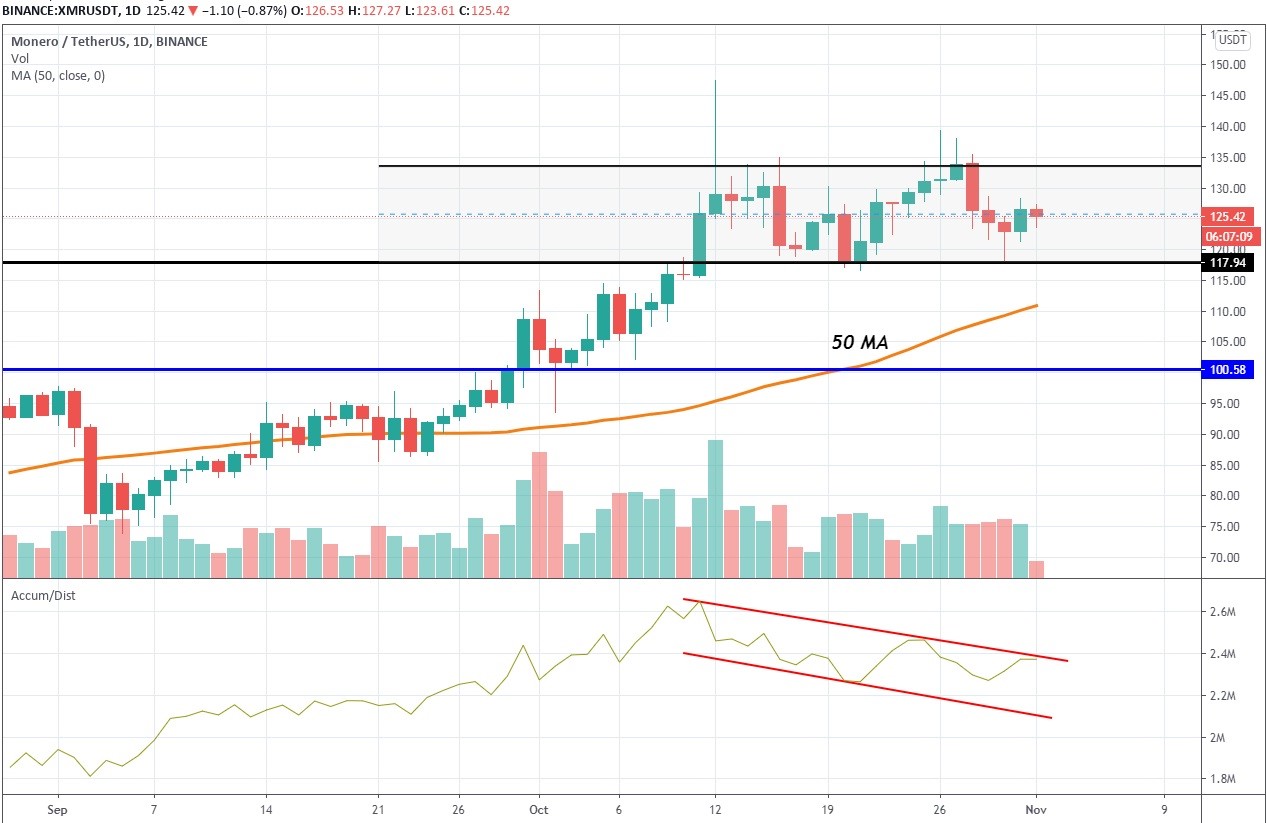 The daily time frame offers an even clearer picture of how XMR is being driven by the sellers into the consolidation channel, though here, the Bollinger Bands are already narrowing down and aligning with the channel borders.

The ongoing consolidation is also confirmed by the Accumulation/Distribution indicator that is flowing confidently in the neutral zone, signifying that the demand for XMR remains stable. However, it also shows the bearish divergence, which could result in the predicted price drop either to $110, where the 50-day MA would be used as support, or the $100 level.