Monero will not see a strong surge in the near future

Monero (XMR) is one of the rare few cryptocurrencies that are currently trading in the green, while the majority of the crypto market experiences losses. The coin sits as the 14th largest cryptocurrency by market cap, with the current price of $53.84, and a market cap of $934.15 million.

With the current period being rather uncertain when it comes to the future of cryptocurrencies, many are wondering what might happen to Monero in the near future. Today, we will try to answer that.

Monero is a privacy coin, and the biggest one in the world, at that. It was launched back in May 2014, although it did not start attracting attention until early 2017.

Following this growth, Monero crashed together with the rest of the market, continuously going down as 2018 moved on. Its drop was stopped by a support at $40, after the coin broke every previous support level that it ran into.

It remained there for a few months, and then it finally started growing once more in early 2019. It participated in the bull runs that Bitcoin started throughout the first half of the year, once again breaching $100 in June. Its highest point in 2019 was at $117, which was reached on June 24th. 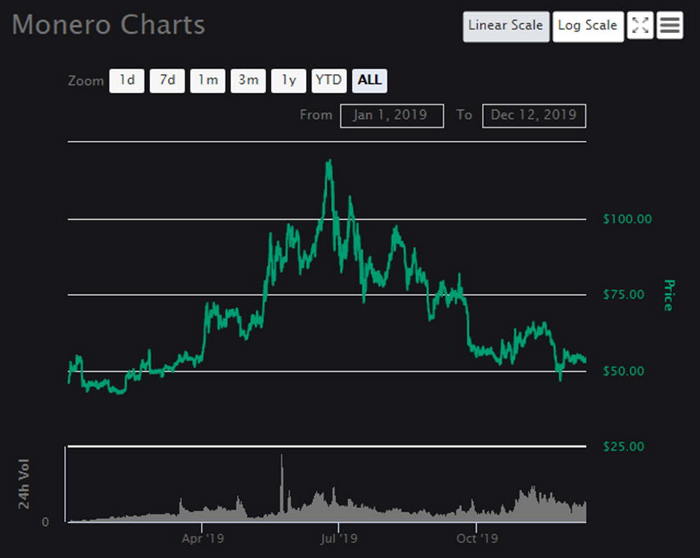 Since then, the market entered a correction period that never really stopped for most cryptocurrencies. A lot of coins are currently below the levels at which they were at the beginning of the year. Monero did not drop that much, but it is currently only slightly above them.

When the year started, the coin's price struggled to breach the resistance level at $50. Currently, the same level acts as a support. However, it appears to be a strong support, as it managed to hold on since the beginning of October.

Where will XMR go from here?

Like pretty much all other cryptocurrencies, Monero follows Bitcoin's lead, and Bitcoin is currently not in a good place. Experts believe that the coin is likely to see a major drop in days to come, although its fate has not yet been decided. BTC does have a chance to bounce back, and the same is true for Monero.

While it seems unlikely that Monero will see a strong surge in the near future, the coin's support might still hold. If it breaks, it will likely once again turn into a resistance, and it will be quite difficult to breach.

In other words, Monero's best-case scenario is for the coin's price to remain where it is for the time being. As for its price in the long run, it is far more difficult to accurately predict. As a privacy coin, Monero is often facing difficulties, as not a lot of crypto exchanges have it listed. However, it is still the biggest privacy coin, with its daily trading volume being well above $100 million.