It’s rocky time now on the cryptocurrency markets, especially for those traders who have failed to anticipate the sudden reversal that happened in mid-February, which correlated with the collapse on the traditional markets, specifically the S&P 500 one, caused mainly by the coronavirus scare and the unprecedented infusion of money on the part of Federal Reserve System.

Anyway, the time for pondering the reasons behind the abrupt change is over - now traders have to think more of ways to adapt to the current environment, which is, without a hint of a doubt, dominated by the bears.

XMR is going down at full speed

Monero (XMR) couldn’t avoid becoming enmeshed in the market recession, especially since it represents a group of privacy coins that receive special treatment from the government officials in many countries, though it doesn’t hinder their adoption thanks to the anonymity feature. Nevertheless, XMR hasn’t been the ideal representation of health and gains as the 14th cryptocurrency, which emerged in April of 2014, has had a disappointing month, having lost 36% of its value after the uptrend reversal, and moved away from the all-time high to the -90% mark. 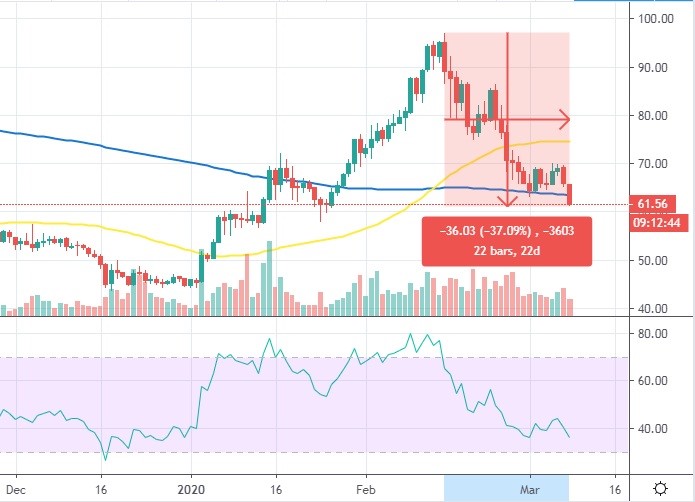 The news about the payment gateway and debit card issuer Bitsa - domesticated in Monaco - adding Monero to its list of accessible cryptocurrencies did manage to give XMR a slight boost, but it was only enough to take the price to the ordinary swing high at $86, which constituted a half of the previous downward move from $96,7, where the late uptrend had peaked - to an interim support at $75.

Upon that, Monero has moved further down south to form an ABCD bearish pattern, which ended right at the 200-period moving average that was deemed as the last barricade for the bulls. Following the six-day period of consolidation, the sellers are making another attempt at pushing the price lower, with the probable goal of establishing support at $57 and beginning another period of consolidation. 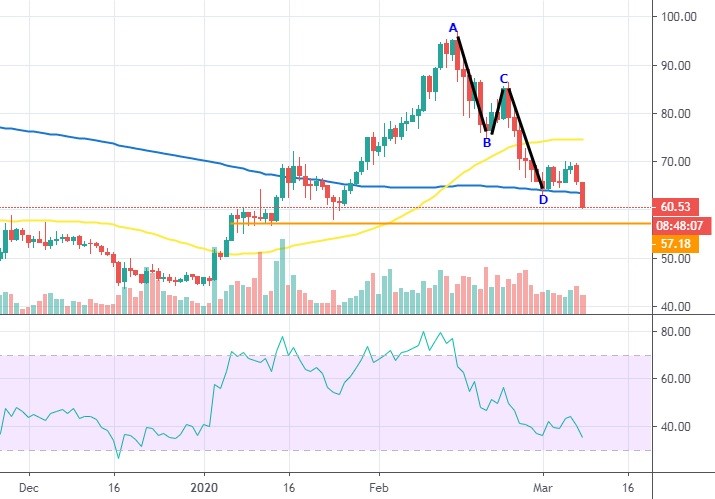 This move would probably take the RSI, which is presently at 34, all the way to the oversold area. From then on out, traders should start anticipating the bottoming out, unless the bears gather enough strength to push the price even lower to the pre-rally level at $44.5, a scenario which just a few weeks ago, seemed virtually impossible, but now it’s shaping up into reality.

Moving on to the 4-hour time frame, we can see more clearly how the full-scale downtrend is unfolding, accelerated by the death cross that emerged on February 20, when the price had already descended below both moving averages. 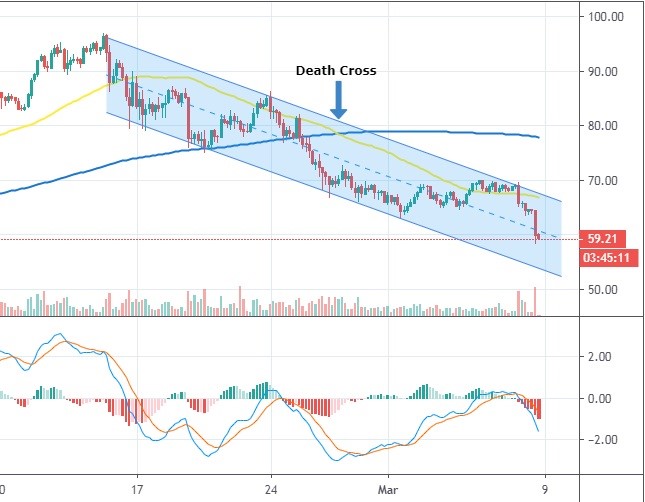 But even before that, the price had formed the distinctive downtrend structure to which is currently adheres. There are practically no hints at the possibility of Monero climbing even above the 50MA - MACD has already sunk below zero, with the length of red histogram increasing rapidly. This could only mean that XMR will reach the bottom of the descending channel at around $53.6 - $52.5, thus exhausting the downward momentum for the time being. It’s difficult to say right now where the market is going to find the bottom, but one this is for sure - going long on Monero in the present situation could have a devastating effect.