Monero attracts quite a lot of attention

As the 12th largest cryptocurrency by market cap and the largest privacy coin in the world — Monero (XMR) is a coin that attracts quite a lot of attention. As always, one of the most important aspects of it is its price, which currently sits at $59,09, after dropping by 0.29% in the last 24 hours.

As for the coin's market cap, it is still above $1 billion, even after the recent price crash. XMR also sees quite a lot of usage, with its trading volume in the last 24 hours being at $87.5 million.

Most people in the crypto industry likely know that Monero is not a young coin. It was launched all the way back in 2014 after it became apparent that Bitcoin is not as anonymous as many originally believed it to be. However, it took years for people to take enough interest in XMR for the coin to see proper price growth.

It finally started happening in late 2016, and when 2017 came, the coin joined the rally and went all the way up to $480. It reached its ATH around January 7th, 2018, after which it crashed with the rest of the crypto market, performing rather similar to most other coins. There was the initial crash, the apparent recovery in April/May of 2018, and then another drop.

After a few months of stability, the coin also participated in the second price crash in November, after Bitcoin Cash had a hard fork. Monero hit its lowest point in over a year on December 16th, 2018, when its price fell below $40.

The situation took a turn for the better once 2019 came around. At first, the XMR price remained between $40 and $60, fluctuating between these two borders. Eventually, it managed to break the resistance at $60 once the rallies had started earlier this year, and it almost made it to $120 before the correction took place.

Monero's drop brought it back to a support at $80, which managed to hold the coin for quite a while. Eventually, it broke, and Monero initially tried to go back above it, but it failed, and it now appears to be in a free drop which might not stop until the coin's price hits $40. 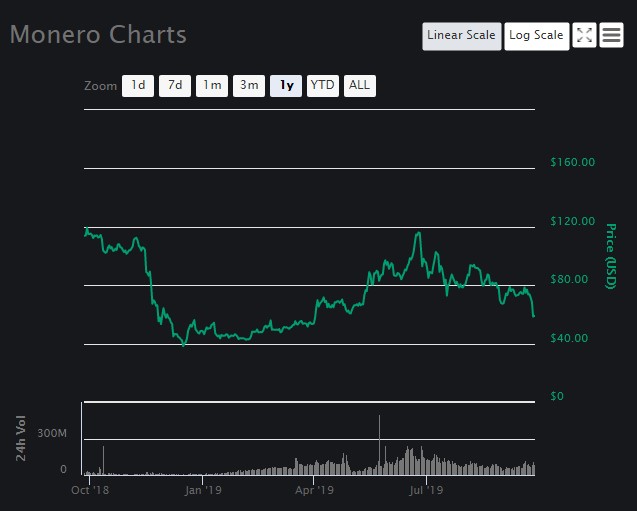 It is safe to say that Monero has had quite a rough few years, but that is the truth for pretty much every other cryptocurrency out there. Still, while Monero did suffer a lot, it still stands as the biggest privacy coin out there. As such, it is not going away, even though it slipped a bit in terms of ranks on the list of largest coins by market cap.

The coin still has a strong, dedicated user base that won't abandon it, and its trading volume confirms it.

In other words — Monero is a cryptocurrency that offers privacy and ranks among the best of the coins in the entire crypto industry. Its price is currently on the downside, but this is likely only a temporary issue, a current setback. XMR will likely be back, as it took every opportunity to try and grow further up. As soon as the next rally arrives, it will be among the biggest growers on the list.

Ethereum Classic (ETC) has been one the most unfortunate altcoins of this summer as it had suffered as many as three 51% attacks in a span of a month, the last...

Chainlink (LINK) belongs to the 93% of altcoins that saw a significant price decline in September. But in the case of LINK, it wasn’t just a mere correction that...

BitTorrent (BTT) had spent the entire summer being engaged in a moderately energetic rally that helped take the price up by 75.7% in 70 days, until it encountered...

In our previous Algorand (ALGO) price prediction article, we advised you to see how the market dealt with the bullish flag pattern before entering any trades, and that...

The year 2020 began phenomenally for Bitcoin SV (BSV) as the hard fork of Bitcoin took a rocket to the Moon in the first three weeks of the year and gained 500%...

The last few days brought a lot of excitement for traders as Bitcoin (BTC) went past the established macro resistance at $12,500 like a hot knife through butter on the backdrop...

Following the months of super dull price action, when Litecoin (LTC) schlepped back and forth between $42.45 and $51.4 without any particular direction, the now 9th...

Ethereum (ETH) has been rallying for the past three days on the back of the news about PayPal entering the cryptocurrency space and the introduction of deposit...

In our last CHZ price prediction article, we anticipated the price to breakout from the symmetrical triangle after going past the price level at $0.014. Since that publication...