MonaCoin is one of the most popular meme-based cryptocurrencies that emerged in this space. The coin was released in 2013 and became the first-ever altcoin to come out of Japan. The coin itself isn’t overly fancy in terms of technical capabilities - it employs a Lyra2RE consensus algorithm and represents a payment system that isn’t overloaded with features but, nonetheless, is practical and efficient. The development on the MonaCoin network is being conducted not by a particular founding company but the entire community of developers that use this cryptocurrency with a cute logo that depicts a cartoonish cat.

Despite the fact that MONA belongs to a class of so-called “humorous” cryptocurrencies, or the ones that have been developed as a part of a certain subculture, it has a relatively large daily trading volume. As of the time of writing, the 24-hour trading volume of MonaCoin was estimated at $16 million, which is far more than that of its direct competitors in the global ranking: KickToken, THETA, and Horizen, all of which have a volume of less than $2 million. By the way, MONA is currently ranked 58th on Coinmarketcap. Its present marketing capitalization stands at $88 million - should it increase by no more than $10 million, MonaCoin could jump straight to the 54th spot and push out Nano and KuCoin Shares.

It should be noted that MonaCoin is being traded mostly on the Japanese cryptocurrency exchanges, with Bitbank accommodating 95% of trades. Such a dominant presence of a single trading platform means that MONA is susceptible to pump-and-dumps, one of which happened not that long ago.

The summer pump and dump

On June 19, a few days after MonaCoin had a strong rally that allowed it to break out of the descending trend, the price of the coin was shot through the cannon from $2.25 to $7 in a matter of a few hours, and then got pushed back as quickly as it rose. 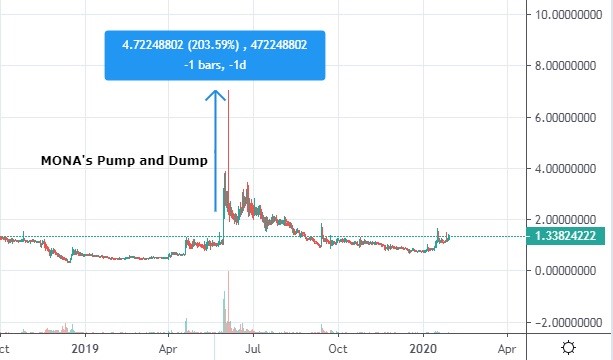 Although such extreme price fluctuations aren’t happening to MONA often, a trader should be aware of them in order to be able to elaborate their take-profit strategies accordingly.

MonaCoin’s rally is not a joke

The Japanese meme cryptocurrency began its 2020 rally on the first days of January, making a gradual succession from $0.7 to $0.84 and then having a powerful impulse to the upside in four green candles that came one after the other. 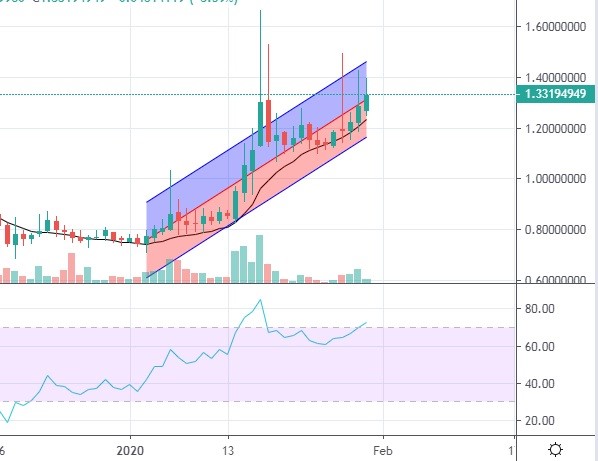 Here we also see that MONA shows three huge price sparks which had been immediately extinguished by the bears. But let’s keep these instances of immensely volatile price action aside - the “cat” coin has been moving accurately within the confines of the upward channel, diligently making higher and lower highs, a prerequisite for a healthy uptrend.

Moreover, the chart is currently moving in total concordance with the 25-day double moving average, enabling it as a support level. The trading volume is also gradually increasing, so the market might be gathering strength for a significant move.

At the same time, the 14-day RSI has entered the overbought region, pointing at the possibility of a looming price drop. In order for MonaCoin to confirm its bullish intentions, the price has to breach the $1.4 resistance while continuing making lower highs. A drop to $1 would mean the probable cancellation of the rally.