Mithril (MITH) is definitely not the type of altcoin that occupies the imagination of retail traders. It sits at the wrong side of global cryptocurrency ranking - 531st position - and has a very modest market capitalization of $9 million that has been floating up and down along with the price action. Nevertheless, the average daily trading volume that fluctuates between $2 million and $10 million - and also the fact that the coin is listed on such well-regarded exchange platforms as Binance and OKEx - suggest that token has its share of traders engaged in this market, which calls for the MITH price prediction.

MITH is red across the board

On the fundamental side of things, Mithril represents the blockchain-enabled social media platform that rewards users in MITH for their contribution of engaging content, the idea that has also been realized by the projects like Steem that owns the once-popular Steemit platform. Mithril’s supplemental product comes in the form of the proprietary digital wallet that allows for storing, staking, and swapping cryptocurrencies.

All in all, MITH offers nothing out of the ordinary in terms of fundamental value, hence its position in the rankings, a small market capitalization, and the all-time ROI of - 89%, which leads us to the first conclusion that Mithril isn’t suitable for long-term investment and bullishly-oriented trading. To prove the point, here is the performance profile of MITH from the yearly to the weekly periods.

There are plenty of altcoins in the same weight category as MITH, for instance, nOS (NOS), Achain (ACT), and YF Link (YFL), that did considerably better over the same period of time, although the token under review had a few moments of glory, especially in the second part of July when its price got launched to the upside and had the 122% flight on the bullish plane until it crashed into the mighty strong resistance at $0.0125 that literally represent the borderlines between the bearish and the bullish zones of influence. 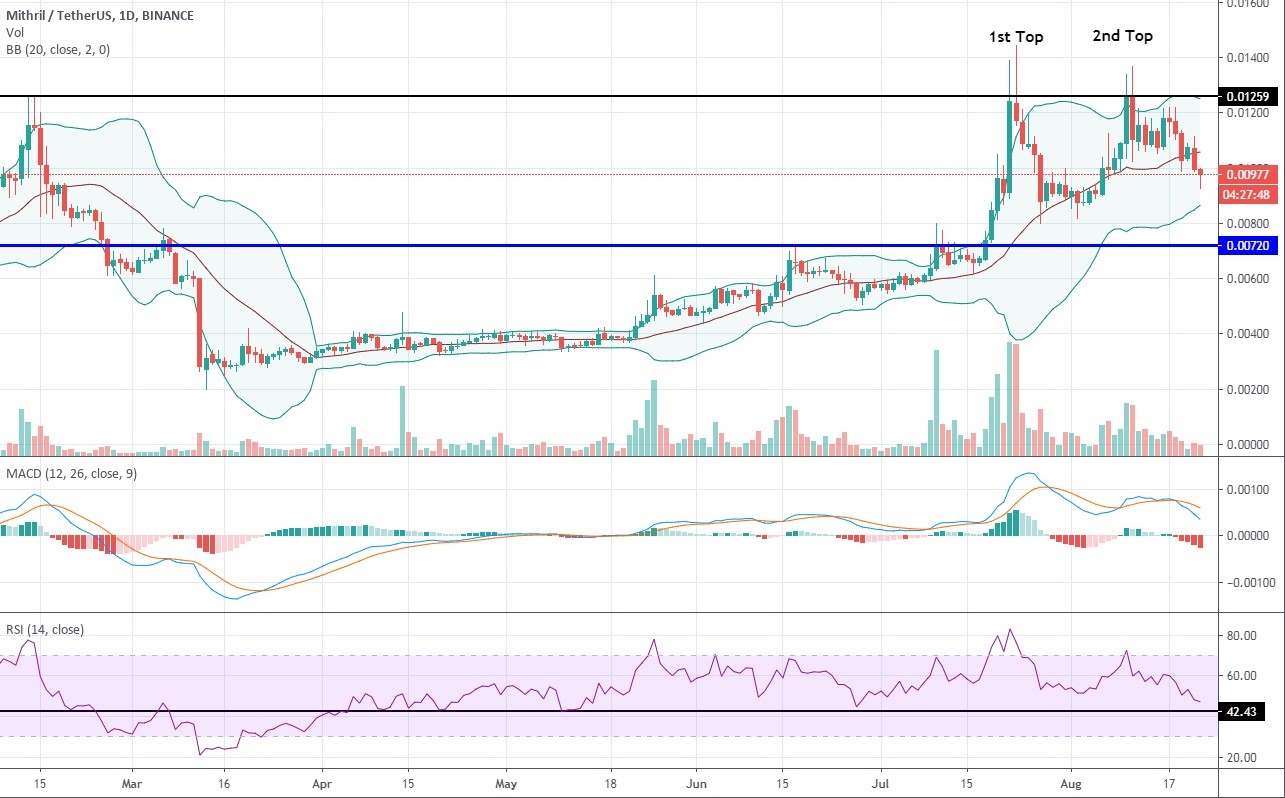 The daily chart above makes it crystal clear that the recent price action has formed a double top, the common yet extremely bearish reversal pattern that has already begun to play out on this time frame. Notice how the price has descended below the middle line of Bollinger Bands, which is a strong signal concerning the underlying shifts in market sentiment. Considering how short was the retracement near that line, the sellers won’t be giving any slack to the buyers who appear to have lost the initiative completely.

To summarize, if you are still holding Mithril in your trading account, for whatever reason, consider selling it asap, even if you have bought it at the top. Cut the losses - or collect even the smallest profit - because everything lines up just right for the MITH’s price to drop much lower.