Mindol (MIN) is a young coin that had entered the cryptocurrency market only about eight months ago, but really made itself heard in November. Some reports suggest that MIN has been listed on the first cryptocurrency exchange on March 29, and began trading at a price of $0.65. 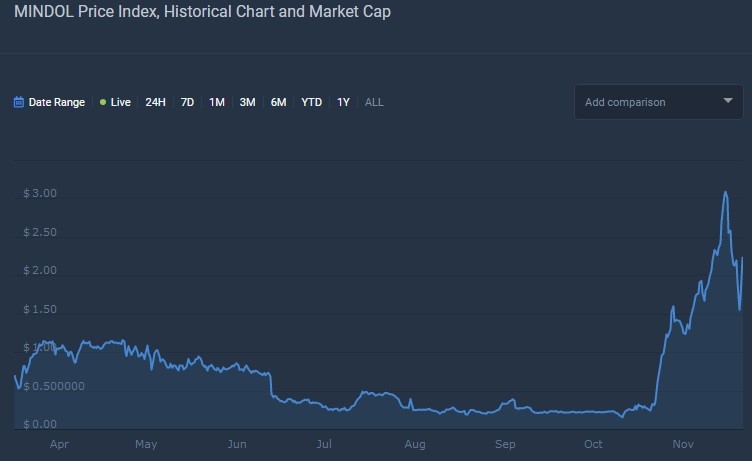 As we can see from this all-time chart, Mindol has been lurking for the better part of the year, not being able to break the resistance of $1.1. The spring/summer consolidation has been followed by a prolonged correction that took MIN to the support level of $0.23, where the coin had been loafing about until November 5 - 6, when it went on the biggest rally to date.

Since the beginning of November, the value of Mindol has been raising like an enormous tsunami from the previous support to the all-time high of $3.29 in less than 30 days. This colossal price boost has attracted the attention of the entire crypto community since it was arguably the biggest pump among altcoins throughout the whole fall. The interest towards altcoins, and MIN, in particular, has been fueled by a relatively disappointing performance of Bitcoin during the same period. Just take a look at this MIL/BTC comparison chart to understand why this rookie coin has become the talk of the town lately. 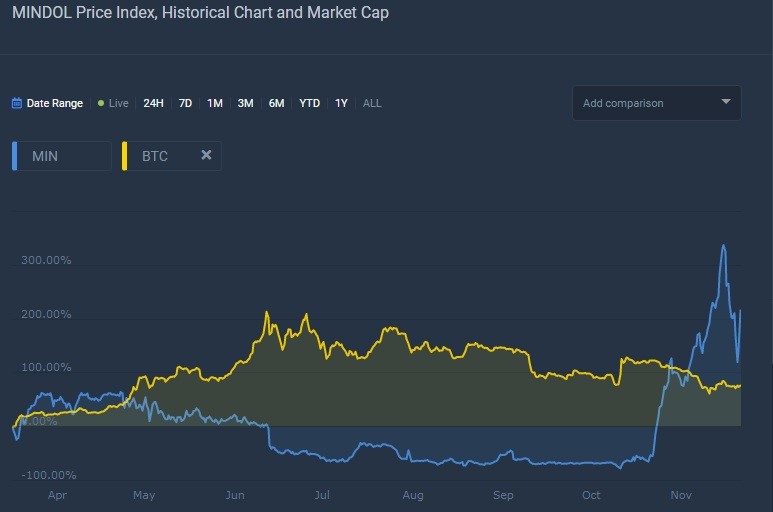 As of the time of writing, Mindol has already dropped to $2.65, which is 25% lower than its all-time high. Prior to that, MIN took a substantial dip to $1.52 but managed to rebound to its current positions, which might have silenced the skeptics who were arguing that Mindol is nothing more than a fluke that is good only for a pump-and-dump.

Regardless of that, these strong showings had catapulted Mindol straight to Coinmarketcap’s Top 30, where it has comfortably landed at the 27th spot, with a market capitalization of $363 million and the average daily trading volume of $6 million.

The future of MIN

It is evident that Mindol is now at a crossroads as it can either continue with the consolidation at the current level, or even sink deeper to its previous support, or have another show of strength that might take it to a new all-time high in the next couple of months. However, the more this coin stays above the mentioned bottom of $1.52, which it had hit in the first days of December, the higher the likelihood of further gains. It would be safe to say that Mindol has found the support at $2 in December, the level from which we expect it to make another frog leap.

This prediction is supported by nearly all technical indicators, which are hinting strongly at a long position. 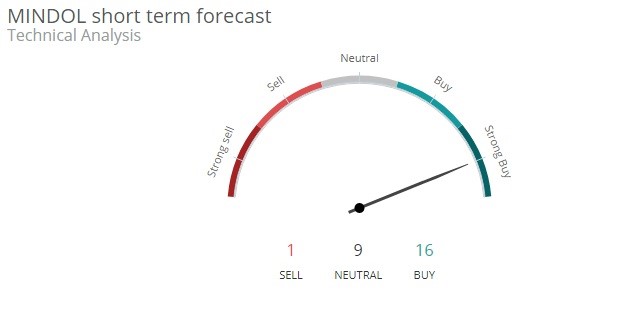 The 14-day RSI remains neutral while the Stoch RSI for the same timeframe is screaming about the buy, supported by the 14-day Average Directional Index. The 20-day EMA and SME are also suggesting that traders should strongly consider supplementing their crypto portfolios with Mindol. All in all, it appears that MIN still hasn’t lost its upward momentum, so we suggest keeping an eye on this coin in the coming weeks.