Litecoin: Would It Climb Out of the Post-Halving Pit?

Charlie Lee’s creation has been somewhat of a disappointment for holders and traders in 2019 since many expected it to rally after the halving that took place on August 5. LTC had a nice run throughout the spring/summer of 2019, which coincided with the minor upward trend within the entire cryptocurrency market. However, instead of the expected consolidation period and a subsequent continuation of price growth, Litecoin has had a harsh correction, with bears dragging the price to $37 from the yearly high of $144. Therefore, Litecoin had ended the year 2019 less than $6 higher than it began the rally - a totally different scenario from what various experts had been preaching during the pre-halving hype.

So the real question with regard to Litecoin is the following: would the Digital Silver be capable of recovering after such an intense and prolonged pressure from the bears and become one of the most attractive cryptographic assets again?

Losing positions in the ranks

To make matters worse, LTC began sliding down in the Coinmarketcap ranks being pushed over by the likes of Bitcoin Cash, Bitcoin SV, and USD Tether. At the time of writing, Litecoin was even briefly overpowered by EOS and descended even lower, to the 8th position in the global ranks, although it regained its place shortly afterward.

Nevertheless, in the last 30 days, Litecoin has gained 38% against the US Dollar and 12% relative to Bitcoin, offering a hint of hope that the post-halving crash might have been a fluke, and we would see LTC back above $100 in 2020.

Is this a downtrend reversal?

One of the basic rules of chart reading dictates that in order for the downtrend to persist, the price has to continue making lower highs and lower lows. A significant deviation from this pattern means that the trend structure is broken, and the market could be gearing up for a reversal. That is precisely what has been happening to the price of Litecoin since the beginning of January. 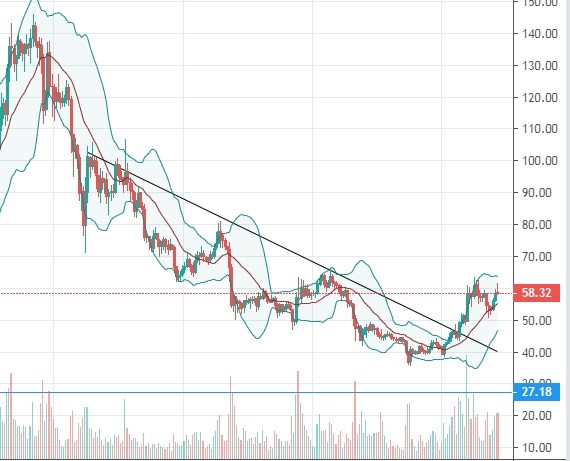 Here Litecoin has broken out of the well-established downward channel to the upside on the back of the very heavy buy volume. Before the retracement kicked in, LTC gained 63% in two weeks, leaving traders and holders wondering if they are finally witnessing the coin’s revival.

The short rally was followed by a healthy retracement, which was accompanied by a decline in trading volume. 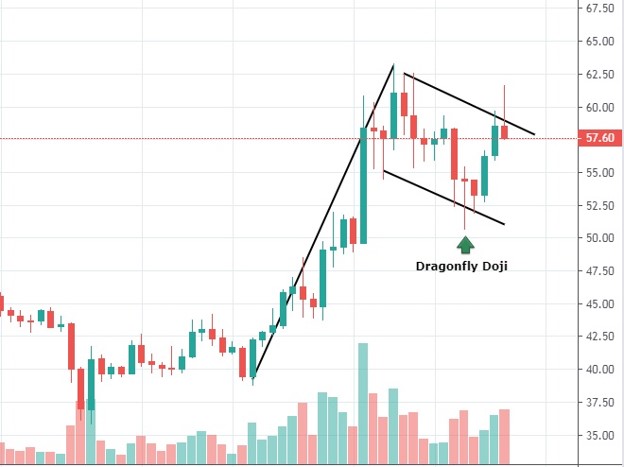 Presently, the price of LTC is making efforts to turn a breakthrough into a fully-fledged upward trend by pushing through the bullish pennant after showing a dragonfly Doji at the bottom of the retracement path. The following bullish engulfing pattern signals that Litecoin is likely to continue climbing uphill if the buyers manage to drag the price past the critical resistance level at $65. Should that occur, Litecoin would step on an open road in the direction of $80. 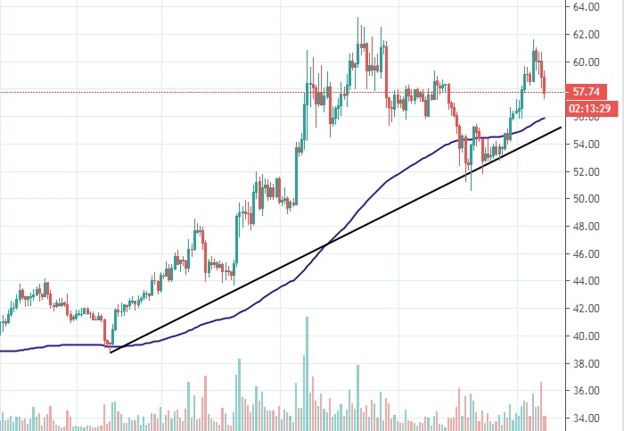 On a smaller time frame, Litecoin has already made the hope-instilling two lower highs, though it is essential to wait for it to confirm the support at $55.3 before entering long positions. On both 1-day and 4-hour time frames, LTC remains above the 200-day DEMA after the breakout, despite a slight dip during the retracement, with the RSI currently being neutral - all these signs point to the possibility of further advancement upward in the next 7 -10 days.