After a month and a half of fantastic gains, when Litecoin got appreciated by nearly 120%, the price of Digital Silver is going downhill, along with both crypto and traditional markets. It goes without saying that entering a long position with regard to any of the top cryptocurrencies right now is beyond risky, so the main question on traders’ minds is where we would see the bottom of the downtrend and a potential trend reversal. But, in all candor, no one, not even the brightest financial analysts, could answer it with at least some degree of certainty. 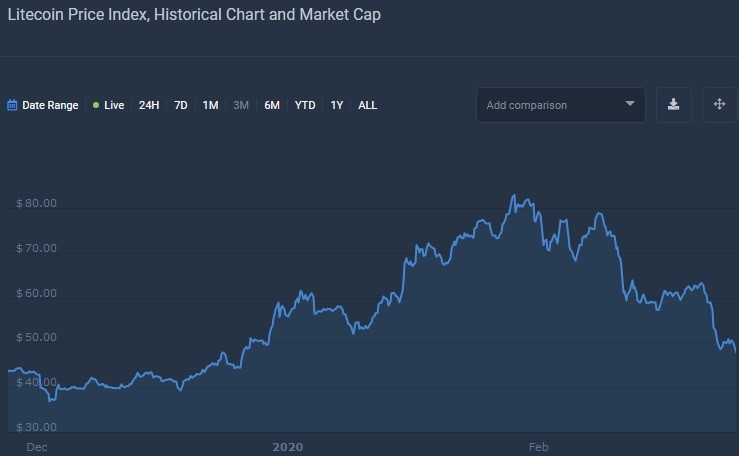 The 3-month price action of Litecoin

The global economy is presently standing on the edge of another meltdown, and, unfortunately, cryptocurrencies, including Litecoin, didn’t become a safe haven to which the concerned investors would resort in the times of collapsing conventional markets. But nothing lasts forever - the global panic and the shutdown of business activities, induced by a coronavirus, will pass, sooner or later, and we will see the recovery, the strength of which would be determined by the proximity to the Bitcoin halving, which is due to happen sometime in May. But before that, the bears will reign the cryptocurrency market in general, and the Litecoin one in particular.

The price bottom: are we there yet?

Red seems to be the color of this spring season in the crypto market since Litecoin began the month of March with a 26% price drop, amounting to 45% depreciation since the trend reversal, which occurred on February 15 with an enormous bearish engulfing candle.

Shortly after that, Litecoin had played a cunning trick on traders as it created a golden cross on the 4-hour time frame, almost at the bottom of the retracement structure, leading traders to believe that the price is geared up to make yet another higher high in correspondence with the seemingly ongoing uptrend. 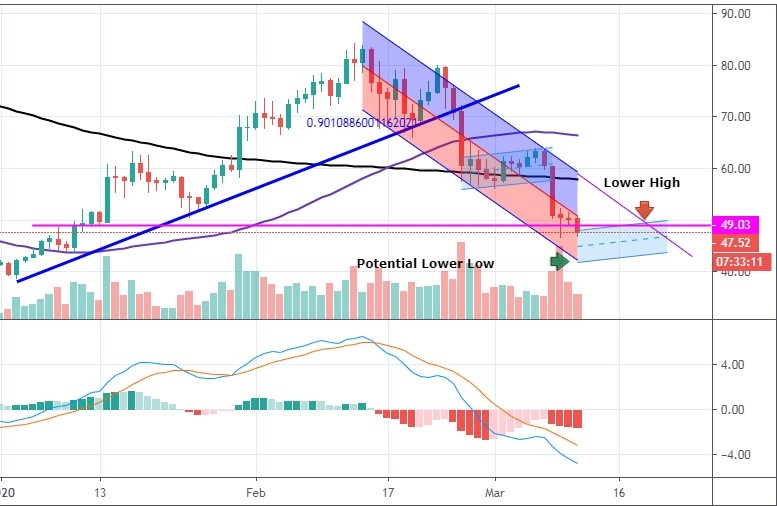 Those have placed their stop-losses wisely or used the tactics of trailing stop-loss, must have been fortunate enough to exit the market right before the crash; although, the huge red candle that had broken the uptrend architecture must have triggered all those stop-losses and accelerated the price fall. The magnitude of this move was so great that it pierced both moving averages and entered the regression channel where it’s currently moving and forming yet another bearish flag. The current tendency dictates that the price of Litecoin should touch the bottom channel line at $42.42 - $42.10, before briefly bouncing to the upside - potentially to $49 -  to complete the pattern.

In the 4-hour time frame, we see the price entering the Bollinger Bands squeeze after a period of consolidation that followed the previous price drop. 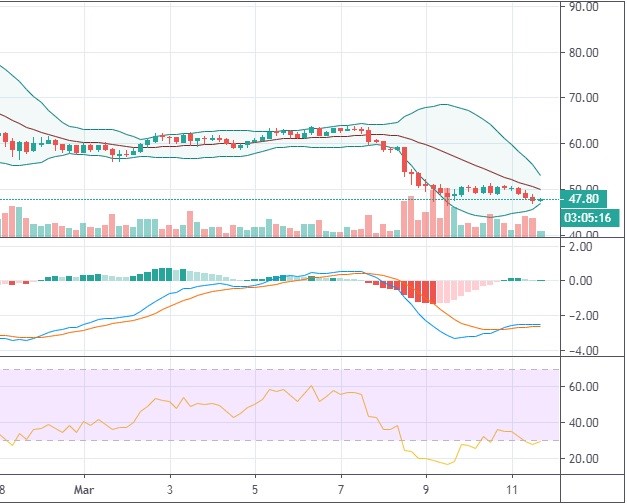 This means that Litecoin is about to enter the phase of high volatility, which should have the downward direction since MACD remains deep below zero, having the intention to perform the bearish crossover - the RSI remains in the overbought area. All of the preceding price drops had the range of about 15% - 20%, so the next support level at $40 looks more than probable.

All in all, as of now, there are virtually no means for telling when the fall of Litecoin would stop, but another week or two of such price action will take LTC to the levels of December 2019.