Litecoin: past, present and future

As the end of the year approaches, cryptocurrency prices are as far away from what optimistic investors had expected as they could get. Bitcoin recently broke the $7k support level, and is currently dropping by over 2%.

As for Litecoin, the coin already dropped to the sixth spot on the list of largest cryptos, and it is currently one of the fastest-dropping coins on the top 10 list. At the moment, the coin's price sits at $39.95, after it just broke its support at $40. Currently, the price is going down by 7.50%.

But, as everyone knows, this is something that the crypto space does, and prices going up and down is nothing surprising. In fact, many are hopeful that these drops may lead to recovery once 2020 arrives, and so dropping prices might present an opportunity for investors to buy coins cheap. As for whether or not a surge will arrive, we can try to deduce that by looking at the coin's past, and trying to notice any patterns.

Litecoin's past and present

Litecoin is one of the oldest coins that are still alive and extremely popular. It has a daily volume of over $3 billion, which serves to show that older technology is not an obstacle for a coin to succeed.

It was launched as a fork of Bitcoin in late April 2013, and apart from a small, short-lived surge in 2014, the coin mostly remained very low-priced for years, going between $2 and $5 for more than half of its lifetime.

This, of course, changed when 2017 kicked off, as people around the world started developing an interest in crypto. With BTC price surging, many believed that its forks — still cheap at the time — will do the same in days to come. Of course, they were right, although LTC price never ventured as high up as that of Bitcoin.

It once again started growing sharply in 2019, starting its growth as soon as the year began. This is interesting, as its growth came months before Bitcoin surged in a series of bull runs between April 1st and June 22nd.

However, while LTC was among the first to start recovering from the crypto winter, it did follow Bitcoin's lead when the time came for the prices to crash once more. In a way, the coin's performance in 2019 mirrors its performance in 2017/2018, only at a smaller scale. 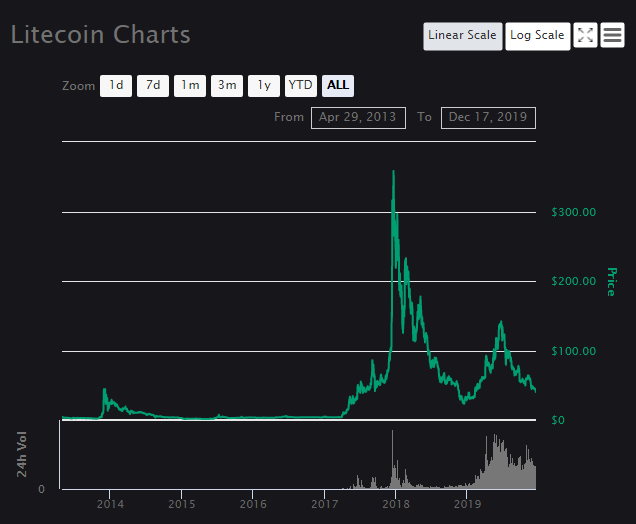 In the last few months, the coin has fluctuated between $40 and $60, although it did not show a lot of strength and a particularly strong will to break the resistance. Instead, it continued to approach the support at $40, inching closer and closer throughout December, until it finally broke this level only hours ago.

Where will LTC go from here?

Predicting the coin's behavior in the future is no easy task, even during the less chaotic periods of the year. With the end of the year approaching, and Bitcoin's block rewards halving being less than six months away, the crypto market might do anything in the near future.

Many expect the market to start surging in the final days of 2019, although that seems less and less likely with each passing day. Others expect the same as soon as 2020 starts, which might still happen. There are even those who think that the prices will keep spiraling down until after the Bitcoin halving. With LTC being bitcoin's fork, and therefore closely tied to BTC, its fate is likely closely tied to Bitcoin's, as well.

In other words, the coin seems too weak right now to do anything on its own, but it will likely be ready to follow Bitcoin's lead in months to come.