Litecoin has been attracting a lot of attention recently - not only due to the fact that it is one of the oldest altcoins around, but also one of the oldest members of Bitcoin's family. Even so, the project's price never went up to impressive, Bitcoin-like heights. It never even came close, and during its peak in late 2017, LTC price was at around $333.

Like all other cryptocurrencies, it experienced severe losses in 2018, reaching its lowest point right as the end of the year approached, when its price dropped to around $24 on December 12th. Its price saw the smallest surge in the second half of December, and LTC managed to end the year at $31.

Of course, as everyone knows, the situation has changed a lot in the first half of 2019. As the year progressed, LTC price kept climbing up. For a lot of other altcoins, and even Bitcoin itself — this climb did not start until April 1st, when the bear market of 2018 finally let go completely, and a series of small surges commenced. 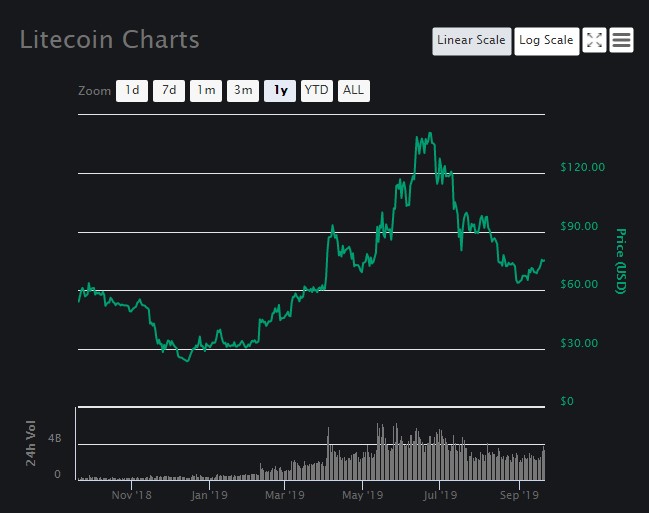 In Litecoin's case, however, the price growth started almost immediately as the year had kicked off. Granted, the price was pretty dormant until February 8th, but that is when the first growth came for LTC, and it continued almost non-stop until the second half of June. LTC managed to climb up to $141 during this period, which is more than half of its all-time high — which was the same kind of performance as Bitcoin itself had experienced.

Of course, both coins then dropped down by quite a lot after June, with LTC being worse for it. BTC price rose by slightly over $10,000, while LTC went up by $300. BTC then lost a quarter of its value, while LTC lost more than half. Its drop was briefly stopped by several support levels, including the ones at $120, $90, and finally at $60. This last one was also responsible for completely stopping the drop, and while it acted as LTC's strongest resistance back in late March — it now took on the role of its strongest support.

In the last three weeks, however, LTC has once again seen some positive development. It managed to grow from a smaller support at $64 to a resistance at $72. After struggling with this level between September 4th and September 16th — it finally managed to break it and go all the way up to $80, which is currently acting as its next resistance.

What awaits LTC in the near future?

In terms of where LTC might go from here — a lot of it remains as uncertain as ever. The altcoin market saw a rally in the last several days, which did not include Bitcoin itself. While the largest cryptocurrency was left trading in the red, others — including LTC — surged by quite a bit. The rally was interrupted by a short drop, and it continued today, this time with BTC joining in. This could also be the real rally that will lead LTC back to former glory, although its true extent still remains to be seen. Many expect the coins to blow up before the year ends and reach their former ATHs. For LTC, that would mean the return to $300 and more, although there is no certainty that this will actually happen.