Litecoin (LTC) is one of the oldest altcoins on the list of top cryptocurrencies, and it is still very popular and widely used. However, it recently fell from its position of the fifth largest coin by market cap to the sixth spot. Despite the recent price surge that took over the market, LTC was still bested by Tether (USDT).

Meanwhile, LTC's own market cap sits at $3.75 billion, and its price is currently at $59.02, after a 3.39% growth against the USD, and 1.73% growth against BTC. However, the coin is still one of the most used ones in the industry, with its daily volume currently being at $4.44 billion. But, what awaits LTC in the future, and how is the coin going to perform in days, weeks, months to come? To determine that, let's first take a look at how it performed in the past.

As you may know, Litecoin was launched in April 2013 as a fork of Bitcoin. It uses the same technology, although it is slightly modified, which made it faster than BTC. However, as BTC price kept growing over the years, LTC only had one small surge in 2013, which ended relatively quickly. Apart from that, the coin spent most of its years at its bottom, being worth only a few dollars.

This finally started to change in March 2017, and LTC started seeing slow growth that slowly but surely took its price to $80 per coin. This level served as a major resistance which the coin was unable to breach, at least until November 25th, 2017, when it started a surge that took it past $360 in only a few weeks.

This growth mirrored that of BTC, which reached $20,000 per coin during the same period. What followed this surge is known to everyone these days — the market crashed in early 2018, and all coins started seeing major losses. LTC itself kept dropping, and while it did participate in the small price surge around April and May of 2018, the majority of the year was marker by sharp drops.

LTC entered 2019 with the price barely above $30, and it remained there until mid-February. Despite the fact that BTC itself did not start surging majorly until April 1st, Litecoin did, and it soon started climbing past numerous resistances, albeit slowly. Its progress gained some speed when BTC and the rest of the market caught up, and eventually, LTC reached almost $150 before the correction took place in late June. 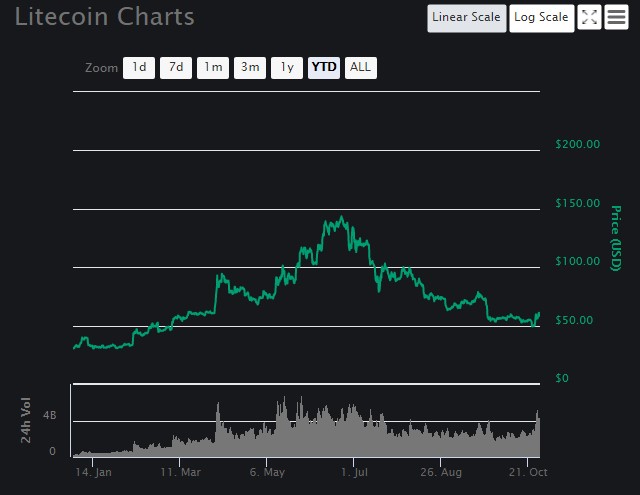 While this is hardly a new ATH for the coin, it does represent its highest point in 2019. After that, the coin kept dropping until it reached its resistance-turned-support of $50 about a month ago. LTC did not see major moves since then, and while it did participate in the recent price surge, its price did not make any major comeback to former heights.

Where will LTC go from here?

Litecoin has demonstrated its usefulness and ability to keep the crypto users' attention for more than half a decade, now. It remained among the top 10 coins for years, and while it did go up and down the list, it was there for most major events that struck crypto history.

Earlier this year, it started moving up before BTC, which also means that it started moving before the majority of the market. Furthermore, its volume shows how much support the coin is getting from its daily users, meaning that there is definitely a future for LTC. As for its price, its performance is a bit more difficult to predict, as it is quick to fall, just as it is quick to grow when the conditions are right.

As far as anyone can tell right now, LTC will likely remain where it is, unless a major bull run arrives shortly. It is not impossible, and many expect it with the end of the year approaching, although not everyone is convinced that it will come.