After a disappointing post-halving period, which saw Litecoin plunging from the 2019 highs of $142 - $144 to the lows at $37, Digital Silver has finally begun showing signs of recovery, as it had confidently broken out of the downtrend in the last days of December.

The past 30 days have been relatively productive for the creation of Charlie Lee - the coin gained 33% against the US Dollar and 19% against Bitcoin, but failed to outperform Ethereum.

What charts tell about the probable future of Litecoin

Let’s start reviewing the price action of LTC from large time frames in order to be able to comprehend the broader context. On the monthly chart, Litecoin has made an attempt to break out of the downtrend, which was lingering since the infamous 2018 crypto winter. 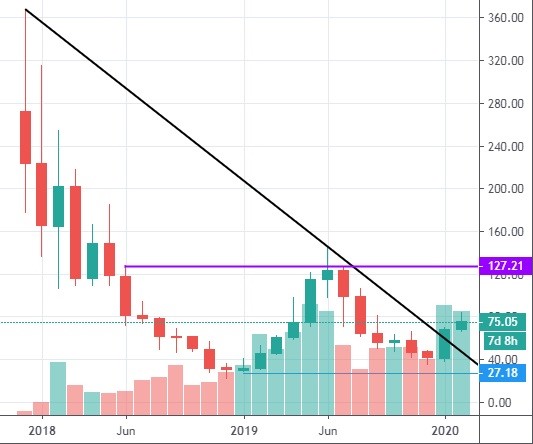 The year 2020 began very well for Litecoin since the currency has been increasing in value non-stop on the back of a massive buy volume, comparable to the one that this coin had during the 2019 minor bull market.

The current monthly candle is of utmost importance for the future trading strategy because it would serve as a confirmation of the looming bull market. Should this month end with a green candle with a thick body and relatively small wicks, we could begin to entertain the possibility of the formation of the three advancing soldiers pattern that has definite bullish properties. Otherwise, the market would show its indecisiveness and cancel out the most optimistic prognosis regarding Litecoin.

The same time frame shows where LTC would meet the most significant selling pressure, which is $140, the level that stands since April 2018. Moreover, that same resistance line almost coincides with the 0.382 Fibonacci retracement level, thus adding it extra strength. But before that, Litecoin has to pass the less pertinacious resistance at $106, which would serve as the first step on coin’s way to the much-anticipated price level at $200.

The weekly time frame further proves that bulls are gathering strength to make a push to the psychological resistance level at $100. The price has already made an attempt to go above the 200-period moving average, but so far didn’t manage to entrench above it. 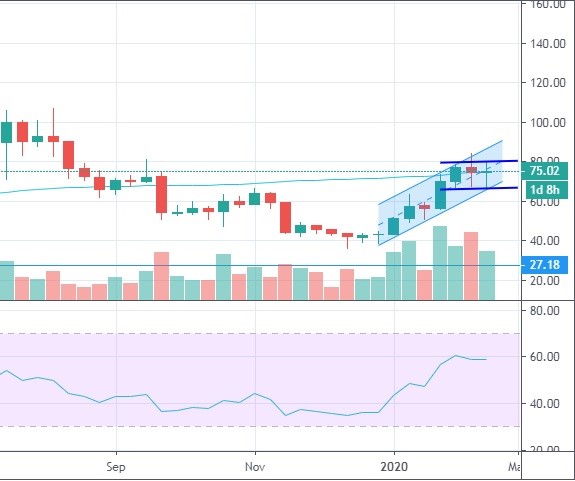 Nevertheless, Litecoin has been moving obediently within the confines of the ascending channel, making higher highs and lower lows in a diligent manner. But the 14-period RSI hints at the possibility of consolidation as it has begun moving horizontally just below the neutral level of 60. Furthermore, the candles that represent this week’s and last week’s price action have very slim bodies and short higher/lower wicks despite being formed on the back of the higher-than-average trading volume. This could only mean that the price is about to begin flowing within a horizontal trading corridor, thus opening up the opportunity for some scalping. 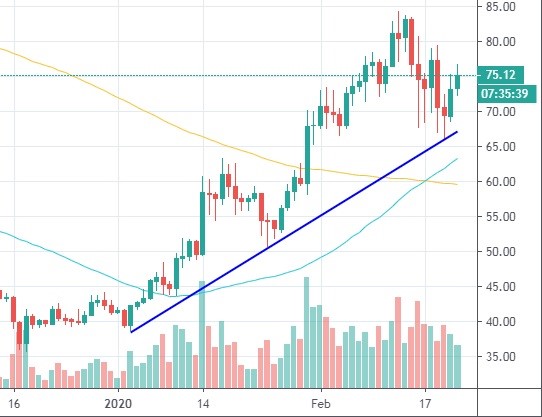 The daily chart further confirms this notion by being unable to form a proper bullish flag and failing to produce even the slightest gains despite the occurrence of the golden cross. But, on the positive note, Litecoin doesn’t show any signs of weakness as it adheres to the support line and stays well above the 50-period moving average.

All in all, Digital Silver is on the rise right now, so traders shouldn’t try to invent the wheel and just go with the trend.