It is sad to see one of the most popular altcoins completely losing the mojo and going down the ranks. Given the recent astounding success of Chainlink (LINK), Cardano (ADA), and a host of other altcoins, traders will soon see Litecoin (LTC) pushed out of the top 10 by Binance Coin (BNB) and possibly Tezos (XTZ). But the latest developments in the cryptocurrency market that saw Bitcoin (BTC) and many altcoins, most those that belong to the DeFi space, shoot to the upside, while Litecoin also caught some of the bullish drift.

Even though the LTC's yearly gains are still on the negative side: -34.31 against USD; -34.22% in the BTC market; -64.2% against ETH. As you can see, those that once were considered the main rivals of LTC are now leaving it biting the dust, so making a long-term investment in the coin that went from being ranked 4th down to the 9th position would be impractical, to say the least. Despite the 60% bull run during the past month, LTC still remains an inherently weak altcoin, suitable only for intraday trading, although we will also provide the LTC price analysis on the macro scale.

The bull run could be out already running out of steam

The weekly chart shows that Litecoin had reached the point of recovery from the hugely detrimental market crash only at the tail end of July, whereas most altcoins have done so weeks, if not months, ago. 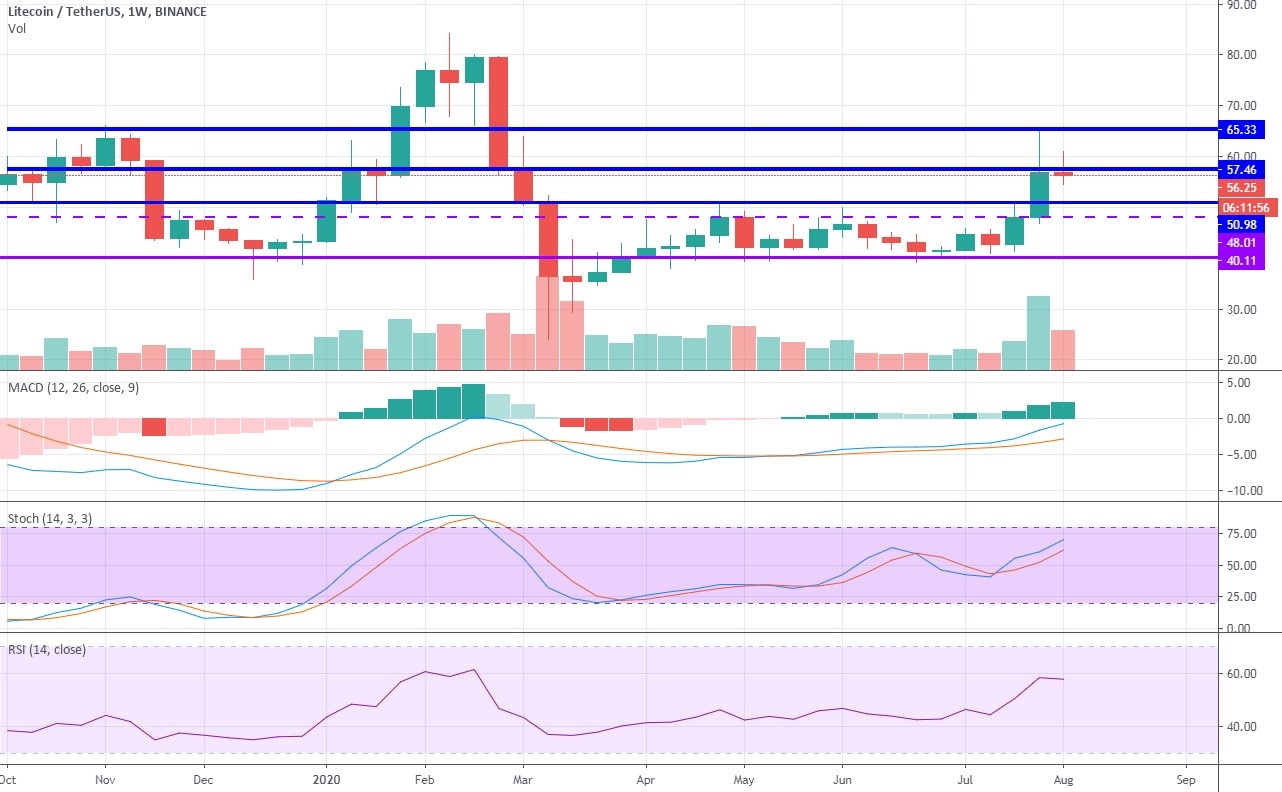 Some might say that it is a good sign because now LTC has a lot of upside potential that could translate to swift gains, but the reality is that Litecoin is severely lagging in terms of price action even in comparison to the inherently weaker coins. The chart above shows that even though LTC made it past the recovery point at $50.98, it is already being rejected aggressively upon testing the resistance levels at $57.46 and $65.33. Now we see how the trading volume is shrinking and turning bearish, a glaring sign that the bullish period of price action has run its course. The current weekly candle will most probably close below $57.46 and form a spinning top, which means that the bears are already trying to seize back the control over this market.

Our Litecoin price prediction is that next week is going to be colored red in this market as the sellers will try to restrain the price appreciation and bring it down to the pre-crash level. In general, the cryptocurrency market will also experience a minor decline due to being already overheated, which will add weight to the LTC pullback.