Following the months of super dull price action, when Litecoin (LTC) schlepped back and forth between $42.45 and $51.4 without any particular direction, the now 9th altcoin surged by 17% in just two days, on the back of the news regarding PayPal entering the cryptocurrency space and listing LTC as one of the available means of payment. 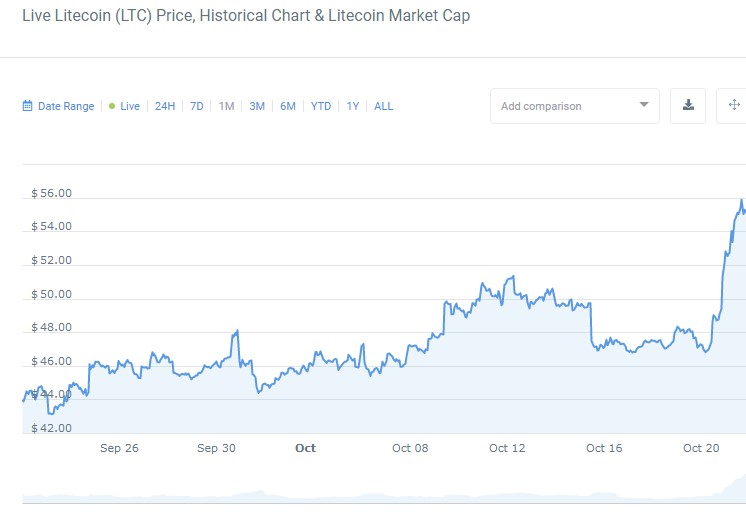 The current price of Litecoin is $54.84, established after the 4% rise to the upside in the last 24 hours, a dynamic price appreciation not seen since the last week of July when LTC has had its previous bull run that, nevertheless, ended in a massive correction that brought the price back to $42.

On October 21, the representatives of arguably the largest online payment system in the world officially announced that PayPal is introducing crypto to its line of services. As per the announcement, more than 340 million active users will be given the opportunity to buy and sell cryptocurrencies within their accounts.

The initial list of available coins includes Bitcoin (BTC), Ethereum (ETH), Bitcoin Cash (BCH), and, of course, Litecoin (LTC). The account holders won’t be able to deposit or withdraw cryptocurrencies directly. Instead, they would have to exchange the coins to fiat within the wallet and then do as they please. Even though this particular feature set is quite poor, it’s a huge step forward towards mass adoption, and the market has reacted accordingly.

After the red hot DeFi run had been brutally extinguished by the dumps in September and October, many deemed the cryptocurrency market as depressive at least until the end of the year, when it has traditionally seen the turn of the tide in the direction of the bull land. 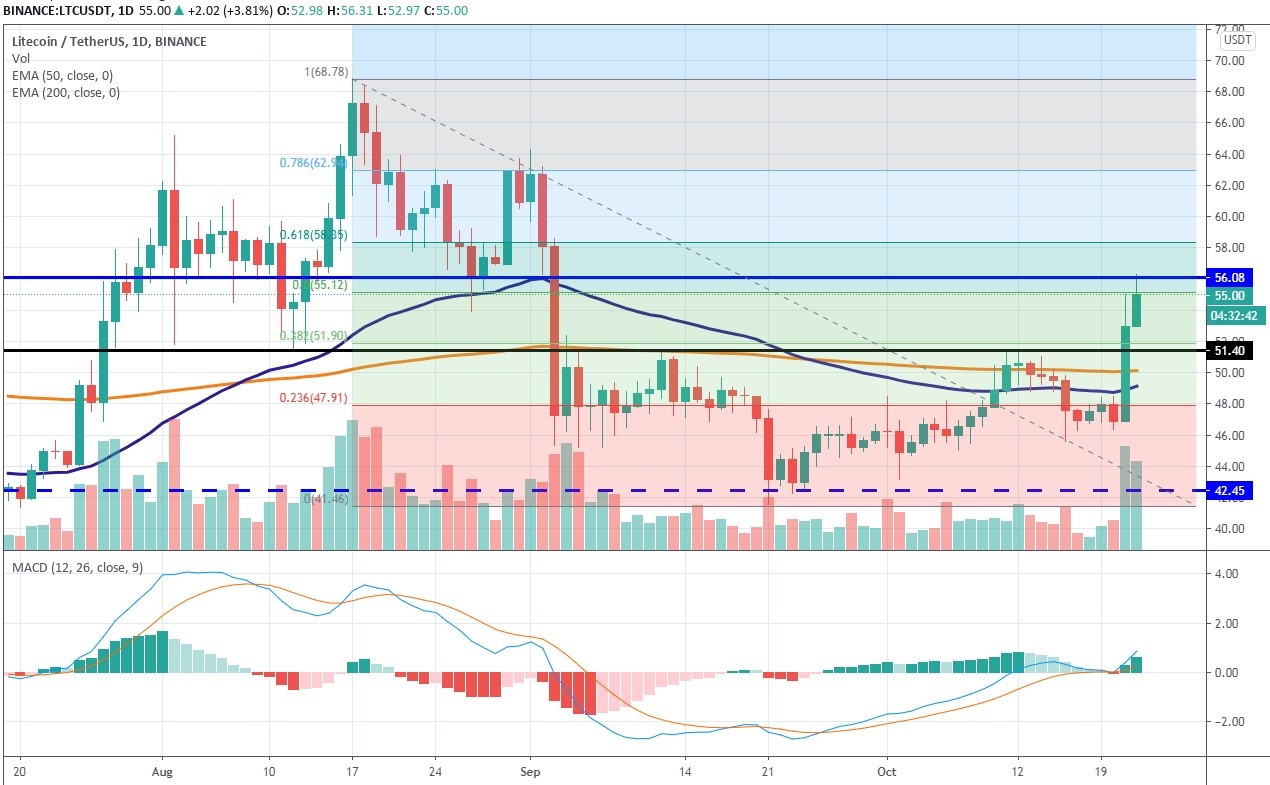 The selling pressure appeared to be insurmountable as LTC had been sinking deeper below both 50 EMA and 200 EMA. But the PayPal announcement has turned everything topsy-turvy as Litecoin drew a skyscraper-like engulfing bullish candle on October 21, which catapulted the price above the MAs as well as the stubborn resistance at $51.4.

The next candle opened with a visible gap while the MACD moving averages started going further apart from each other, suggesting that the bullish momentum is growing stronger. However, the price has already encountered resistance at $56, the level that served as support over the course of the previous rally.

In other market circumstances, we would have suggested a fierce rejection at that level, especially since it closely coincides with the 0.5 Fibonacci retracement level, but the hype around PayPay appears to be so intense that it is very likely to induce an all-around FOMO that would keep pushing the value of LTC much higher, at least to $58 or, in case of the most bullish scenario, all the way to the high of the last six month, which stands at $68.78 - another 22% price appreciation.

Our current advice concerning Litecoin is to refrain from taking short trades in anticipation of correction because this rally might well last for another week until it exhausts itself.