Digital Silver can be labeled as one of the most disappointing highest-ranked cryptocurrencies as it has dropped four places in the global ranks over the course of the previous year and lost absolutely all gains that had been obtained in 2019.

After losing 50% of its value in a matter of two days, Litecoin now sits 90% away from the all-time high of $375, having bounced off $24.14 and initiated a gradual ascend to the levels that preceded the infamous fall on March 12.

That level, of course, it not even close to the historical low of $1.11 that was recorded in 2011, which means that even if the price goes deeper as the coronavirus pandemic and the global financial crisis progress, there’s still enough data to determine the probable support/resistance levels - the indispensable feat for successful trading.

No place for bulls here

Right now, there is plenty of talk about the increasing correlation between the conventional stock markets - most notably, S&P 500 - and the cryptocurrency one, but that theory might be viable only in a relatively short period of time before and during the current crisis.

Basically, when the entire world economy is going down the drain, everything, including crypto, would go along with it - that’s the ultimate correlation. What those who shill for that concept fail to mention is the distinctive difference between the stock and crypto markets, Litecoin, in particular, which lies in the fact that the former has been bullish for a number of years before the historic crash, whereas the cryptocurrencies have been living in the bearish reality since 2018.

This crisis has shown LTC has never really shaken off the shackles in which it has been put at in early 2018 - the two “bull markets” of 2019 and the beginning of 2020 were nothing more than the pieces of the puzzle in the overarching downtrend, as it is clearly seen on the daily time frame. 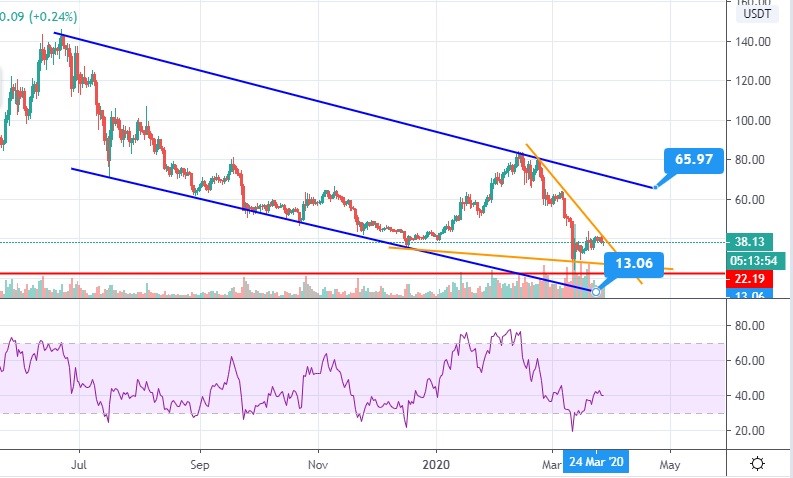 Some might argue that the coronavirus pandemic, which resulted in the global economic lockdown, is to blame for the unrealized dreams of the altseason, but in reality, we have seen the structure of then-uptrend broken much earlier than the virus outbreak began, so COVID-19 has only expedited the inevitable price degradation, not served as its primary cause.

What this means for Litecoin is that traders need to brace themselves for a deeper dive in the coming weeks and even months. The only ponder-worthy issue is whether this descent would be of a gradual kind with healthy drops and retracements, or would it turn into a cascading waterfall, similar to the one that started this downtrend. Traders will discover a partial answer soon enough - when LTC breaks out of the descending triangle, most likely to the downside and back to the $24 area.

This pessimistic prognosis is explained by the fact that the US, the global financial center, is likely to become the next epicenter of the coronavirus pandemic, thus causing an even greater demise of the global economy and the cryptocurrency markets, by association. Therefore, one shouldn’t be surprised to see Litecoin at $13 in a couple of months. Hopefully, that would become a true bottom from which the real bull market would commence.