Right now, Lisk (LSK) presents the biggest interest to traders who give preference to trading cryptocurrencies that are paired with Bitcoin. Binance currently holds the largest market for Lisk as it hosts 35% of all trades involving this coin, the average daily volume of which presently stands at $4 million.

As of writing, there were 190 Bitcoins traded against Lisk on Binance, which constitutes a very respectable volume, especially in comparison to the neighboring altcoins like Enjin Coin and Raven Coin. LSK isn’t overly popular among stablecoin and fiat traders, as the largest such volume falls on the pairing with Polish Zloty on the BitBay exchange.

Therefore, we won’t devote too much attention to LSK/USDT pair, or any other one that involves stable currencies, but instead, focus more on price action against Bitcoin.

It seems that Lisk has a grudge against Bitcoin for being unable to match the gains that the 1st cryptocurrency had put up last year. To be precise, BTC left LSK biting the dust as it outperformed the latter by 70%. The losses were also recorded against two other major currencies: USD and ETH - 17.5% and 51%, respectively. 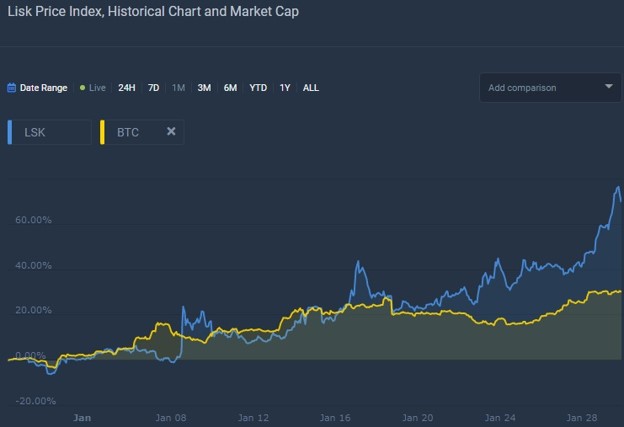 The price of Lisk has made a sizable rebound against Bitcoin in January, which occurred in three significant price spikes on the 9th, 17th, and 30th of January. Before that, the 51st cryptocurrency has been downtrending for several months after the 2019 summer rally.

But when looking at the daily LSK/BTC chart, we could see that these spikes have aligned perfectly with the lines of the downward channel within which Lisk had been moving since last August. 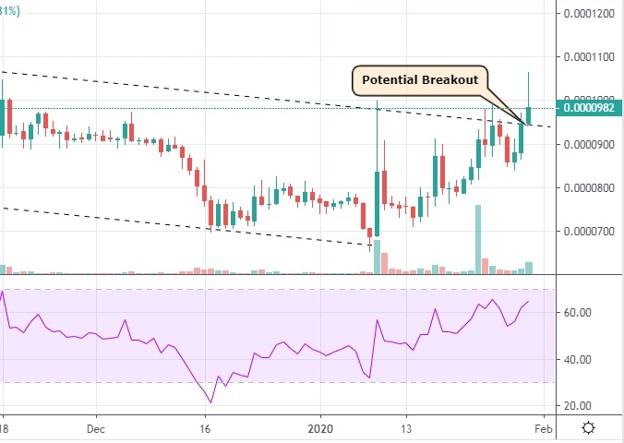 Despite being in the upward momentum, the bears aren’t giving its opponents an easy time, judging from the height of upper wicks that formed at each step of the way to 9400 satoshis, the level at which the price attempted to crack the channel open.

LSK has succeeded eventually, but it still has to overcome the so-called traders’ remorse, which is forming above the 9500 sats level. But yet again, a tall upper shadow of the last candle suggests that bear won’t give up easily, so Lisk would have to fight tooth and nail in order to test the potential resistance at 11,000 sats. Given that the RSI is reaching out towards 80, the overbought area, the trading logic dictates that we might see a retracement after a few day’s time.

Since it’s characteristic of LSK to retrace by around 60% of the upward swing, the possibility of it being pushed back within the borders of the descending channel is relatively high. In that case, we would be looking at the probability of the cancellation of the nascent uptrend and even a downfall to 7000 satoshis. 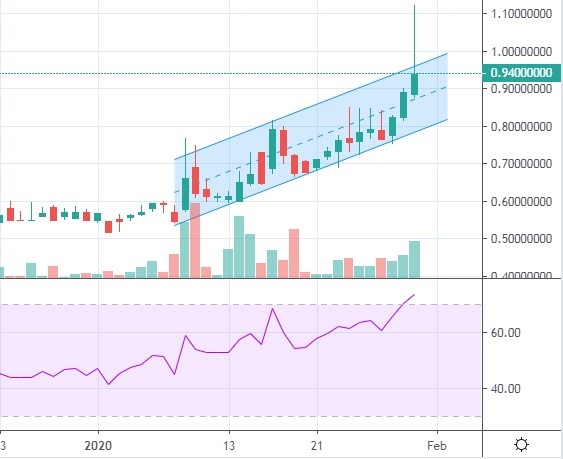 Even though we stated that Lisk isn’t very active on the USDT market, let’s have a quick look at it because there we could witness a very confident uphill hike, accompanied by a sound buy/sell volume. However, the 14-day RSI is already way above 80, so a move down to $0.82 - $0.8 seems to be imminent. Again, the tall upper wick on the last candle shows that the bears are still exerting a significant influence on the market, so the breach of the $1.1 level won’t happen any time soon.