Even though Kyber Network is placed just one step away from the top 50, it turns out to be a much better performer than the majority of higher-ranked cryptocurrencies. To be more precise, KNC is 87% in the green for the last year and 11.3% over the previous month against USD. But this coin has had even better showings against Ethereum as the 2nd currency was bested by 101% on a yearly basis, and 132% in the last month. However, the all-time ROI of Kyber Network remains 72.2% on the negative side.

Therefore, traders who have been ignoring Kyber Network before should pay closer attention to this coin, which holds the promise for great progress once the cryptocurrency market recovers after the ongoing crisis, which will happen eventually. But in the meantime, let’s see whether it is possible to profit from this interesting cryptocurrency in the ongoing bear market.

KNC is fighting tooth and nail against the bears

What must have been the most frustrating for the KNC traders is that on that notorious day that is already known as Black Thursday, the price of the coin had crashed right when it was about to break out of a picture-perfect bullish flag formation to the upside. 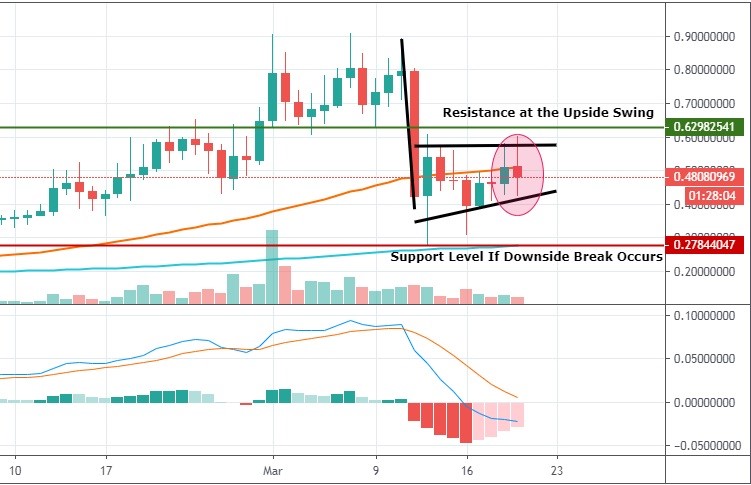 As a result of the market meltdown, the coin lost 65% of its value in a matter of two days, which has surely instigated an enormous wave of panic sale, although, unlike many other cryptocurrencies, Kyber Network didn’t reach the all-time low during that move. For your information, KNC reached its deepest price bottom on February 6, 2019, upon bouncing off the support at $0.116.

But at this critical moment, the coin, backed by the liquidity protocol, managed to hold the line at $0.28 and even stay above the 200-period moving average, which is a great sign of its overall vigor because it means that the bulls still hold some power in this particular market.

In addition, Kyber Network didn’t go very far below the 50-period moving average but remained to hover around it while developing a bearish flag formation on the daily timeframe. Right now, the price is moving within the flag’s pennant that resembles the ascending wedge, though it still struggles to rise above the 50MA, which has been acting as resistance for the past five days.

This is definitely the characteristic that tells about the underlying bullish strength within this particular market, but the two spinning tops in a row also speak of indecision, which means that the price may well go to the downside upon breaking out of the bearish flag, incentivized by some news related to coronavirus or the situation on the global markets. If that happens, KNC will test the 200MA again, which runs at $0.27, upon which the price should bottom out and recover back to the $0.4 - $0.54 channel or begin consolidating around the said moving average, if the selling pressure turns out to be firmer than expected.

But if the bulls do find the strength to push further, their charge is likely to run out of steam at $0.629, the level with which the price has interacted quite often recently, as well as over the past year.