Komodo is presently in freefall, just like the overwhelming majority of cryptocurrencies that had been flashing green for the previous two months. But the fairytale is now over as we have been looking at the sea of red throughout all markets, including KMD. This coin isn’t the one that traders would often find in news reports or price action discussions on various crypto forums. Nevertheless, it has its fair share of traction; otherwise, it wouldn’t be occupying the 73rd place in the Coinmarketcap ranks and featured on more than a dozen cryptocurrency exchanges.

Speaking of exchanges, the most significant part of KMD’s trading volume - which can’t be characterized as large, regardless of the occurrences on the market, as it averages at $4 million per day - is spread more or less evenly between Bilaxy, Binance, CoinBene, and CoinEx. This means that Komodo has no proclivity for various machinations. 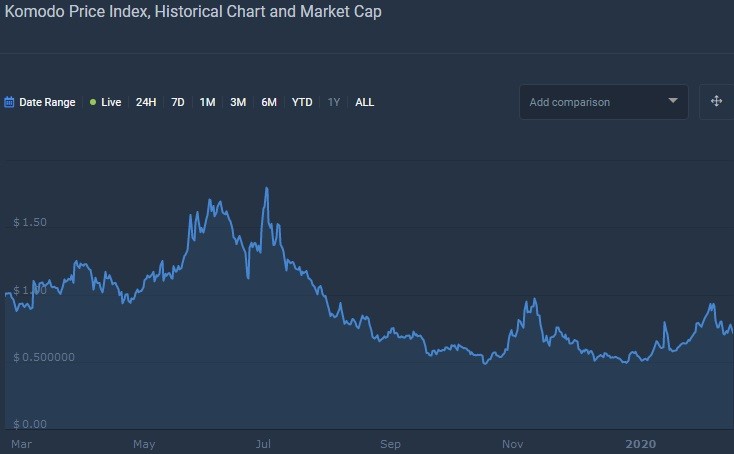 Such a modest trading volume also means that KMD can’t be characterized as a gainer of a coin. In fact, it has been continuously decreasing in value, having lost 41% over the last 12 months, and gained a miserable 0.83% during the previous 30 days. Apparently, this hasn’t been a fruitful period for the coin, though it shouldn’t be regarded as a total loser because it still has 400% all-time ROI, a feature that not all altcoins of the same class can boast.

2020 could be a good year for Komodo, fundamentally

KMD is one of the oldest cryptocurrencies around as it emerged in 2014 with a then-innovative multi-chain solution. Judging from the information on the official website, the team is working ceaselessly on the improvement of its ecosystem, particularly the Antara network that facilitates the development of end-to-end blockchain solutions.

In 2020, the Komodo team plans to introduce a number of upgrades, most notably, the new Komodo Core version, the oracles-as-a-service for Antara, and further improve the proprietary decentralized exchange dubbed AtomicDEX. These, and several more, enhancement of fundamentals would exert a positive impact on the price of KMD, which is currently tanking hard.

The situation on the charts is dire for Komodo

On the weekly time frame, KMD is severely pushed down by the bears, just a couple of weeks after it had successfully broken out of the descending triangle. 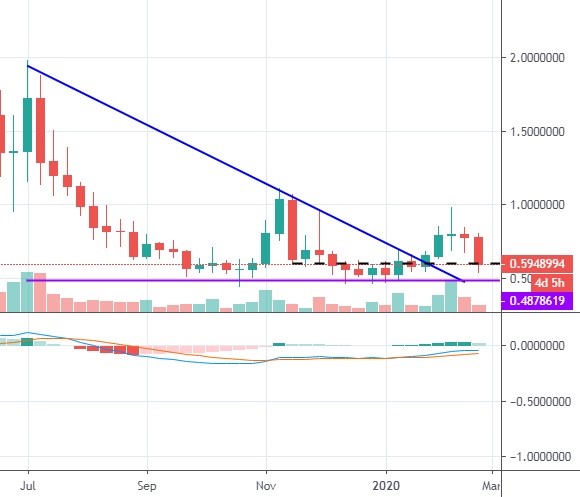 Right now, the bulls are having the last standoff near the support level at $0.59. This level could hold, given that the selling volume remains low, but should it get breached, the price would most probably fall to last year’s bottom at $0.43 - $0.45, wiping out Komodo’s unimpressive gains completely. 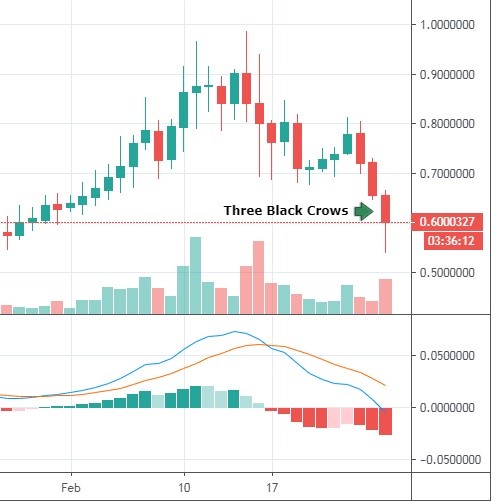 The notion of KMD’s further downfall is supported by the emergence of a strong bearish pattern called three black crows that usually signals about the full reversal of the uptrend. If that pattern plays out to the fullest extent, the consequences for the price of Komodo could be disastrous as it may slide down to the 3-years bottom at $0.43 - $0.45 that would cause another wave of panic sell. To summarize, if you’ve been holding Komodo for the last three-to-six months, now would be a good time to think about selling the holdings because the coin appears to be on the verge of collapse.

Komodo (KMD) Is Driving Higher Prior The Update