While the attention of most traders remains focused on the booming DeFi market, cryptocurrencies like IOTA seem to be overlooked, although this particular one has been displaying modest but stable gains during the past year, especially after the coronavirus crash in March, which is clearly depicted on the corresponding price chart below. 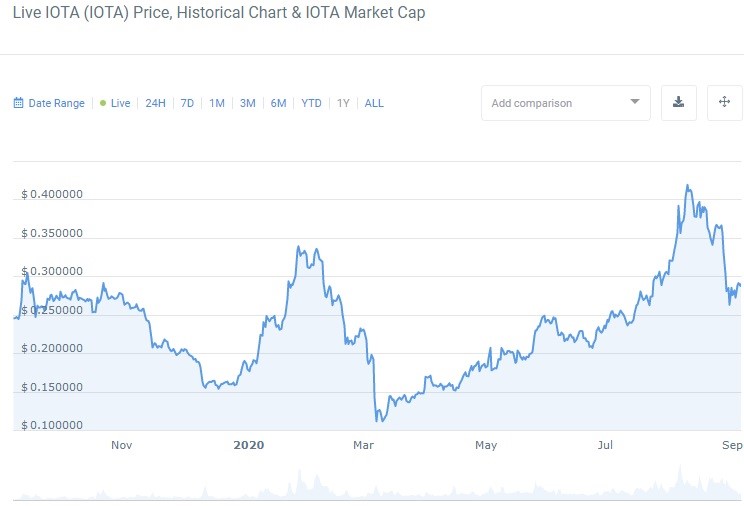 The bears pushed IOTA off the cliff

The coin that represents the distributed ledger for the Internet of Things holds tight to its 27th position in global ranks thanks to the market capitalization of $828 million. At the time of writing, IOTA is priced at $0.29, having gained a respectable 5% in the last 24 hours. Last week also was quite fruitful for the altcoin as it gained 13.8% in the USDT market and excelled in the pair with Bitcoin, having outperformed it by 10.5%. It might seem like peanuts in comparison with the showings of DeFi coins like Aave (LEND) or yearn.finance (YFI), but IOTA’s overall bullish dynamics in the last six months is actually at the level with the market’s finest gainers. Besides, IOTA maintains a positive yearly ROI of 26.7% in USD and 23.7% in Bitcoin, which suggests that it remains on a straight course to recovery after the bear market of 2018/2019.

In our previous IOTA price prediction article, we have correctly forecasted that the price will break out of the tight ascending channel and travel to the resistance level at $0.38 in a series of explosive moves. Actually, the price went as far as $0.45 but was ultimately rejected by the sellers far below the said level, so $0.38 was the safe place for profit-taking. 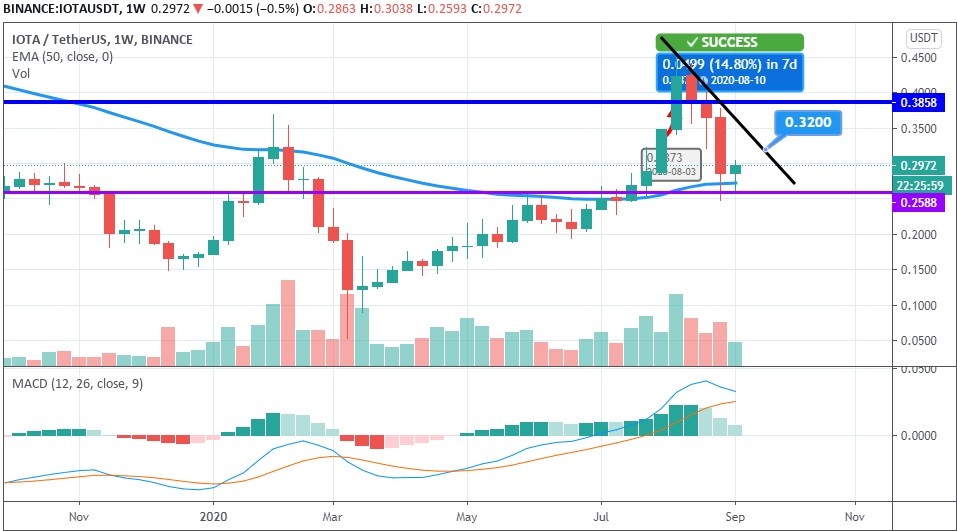 Note that the price started getting rejected at the tail end of August, days before the instant crash occurred. The selloff couldn’t have happened at the worse time for IOTA that was easing into a comfortable retracement when the bears came in, slammed the entire market down, and accelerated IOTA’s nosedive to $0.25, a former resistance, now support, level that served as a starting point for the latest rally. Those who didn’t close their positions when the nice upswing began crumbling, witnessed the evaporation of the months worth of gains.

However, the fact that the price stayed above the 50-period EMA, and now tries to bounce off it, tells that we might be looking at a lucrative dip before the sprint to the psychological price level at $0.5. But given the general uncertainty in the markets, and the fact that the fall is becoming the slow season for cryptocurrencies, traders mustn’t raise their expectations regarding any swift progress in that direction since key indicators suggest that we could see a prolonged period of consolidation at the borderline of the bearish territory.

MACD’s moving averages are drawn towards each other after the main one touched the overbought extreme, which is a reliable signal that the bulls are going to apply additional pressure in the coming three weeks.

We predict that IOTA will get locked in the triangle formation, which implies bouncing between the resistance at $0.32 and support at $0.258 until the resolution to the upside (higher probability) or the downside (lower probability).