IOTA is inarguably one of the top cryptocurrencies in terms of fundamentals, with its quantum-proof protocol labeled Tangle that provides for the use of the directed acyclic graph (DAG) in lieu of the traditional blockchain. This technological solution allowed MIOTA to build an ecosystem that allows for instantaneous transactions at zero or nearly zero cost, plus the network itself is immensely scalable. These characteristics have put IOTA on an equal footing with other reputable and technologically sophisticated projects like Ethereum, EOS, and Tron.

However, the misfortunes happen even to the best, as MIOTA’s proprietary digital wallet called Trinity became subject to a cyber attack, which resulted in funds being stolen from users’ accounts. This event has had a profound impact on the price, which has dropped by as many as 27% in a span of a few days following the hack. 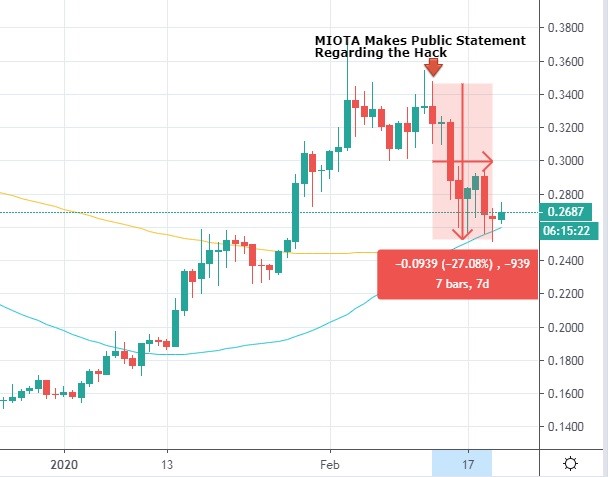 The details about the Trinity wallet hack

Trinity is IOTA’s own digital wallet that was released in the summer of 2019. It was serving its purpose well until February 12 of this year, when users began submitting complaints about missing coins. The IOTA Foundation reacted to that by issuing a warning to the Trinity users, urging them not to launch their wallets to avoid losing their crypto. After a short investigation, the Foundation came to the conclusion that the perpetrators must have gained access to users’ private keys by means of corrupting the network’s primary node dubbed Coordinator. They didn’t share any specific details about the amount of stolen coins, though it’s known that there had been at least a dozen cases of theft of funds from Trinity wallets on that particular date.

Later, the Trinity Foundation sent a memo to all users, asking them to apply the seed migration tool in case they used the wallet between December 17, 2019, and February 18, 2020.

This is not the first issue on the side of fundamentals that MIOTA ran into over the last couple of months. Last December, the project even had to shut down its mainnet, effectively freezing all internetwork transactions, due to the issues with its Reference Implementation software. Therefore, when trading IOTA, it is necessary to keep in mind these unforeseen technical issues that arise every now and then.

The weekly chart shows that IOTA has only recently broken out of the downtrend to the upside, having briefly reached the level of $0.37, which is a strong horizontal resistance that formed in the first half of 2019. Right now, the bears are pushing the price down, though the channel line already acts as a support.

If the coin stays above $0.25 and pushes again for $0.37, possibly even breaching it, we would state the emergence of a fully-fledged bull market.

The situation doesn’t look all too promising for IOTA on the daily chart as we can clearly see the price breaking the uptrend structure and aim downward. 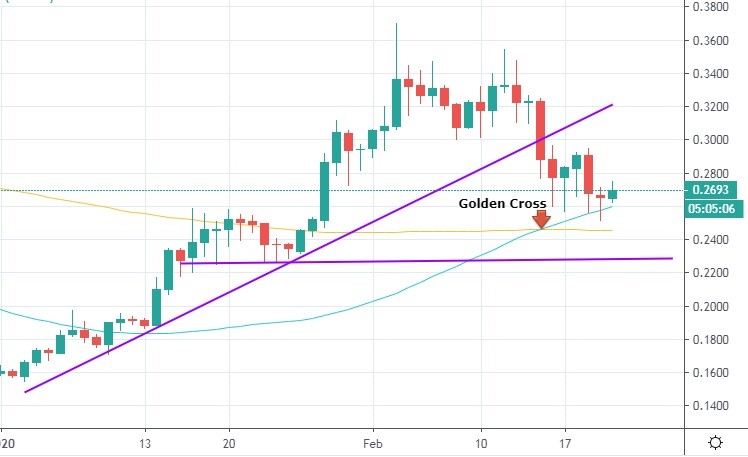 The bears might maintain the initiative for a while, despite the golden cross pattern emerging on the chart. As with all technical indicators, this one could be false, judging from IOTA’s current price behavior. If the coin fails to stay above the 200-period moving average, marked blue on the chart, then we will definitely see the pull back all the way to the previous support at $0.23.