While IOTA is still ranked 25th, many cryptocurrencies are doing way better than a coin that supports the distributed ledger for the Internet of Things  - both in terms of the quality of price action and the progress in development of its fundamentals.

Fundamentally, the ecosystem behind MIOTA is considered to be overly complex and largely underdeveloped, while it is also characterized by many as being highly centralized at this point. Perhaps the introduction of Coordicie, which is a network that is run without a coordinator, could improve the state of this ecosystem, but it is still too far from being implemented. On the business side, IOTA is known for having attracted the interest of big players in the automobile industry, namely Jaguar, but that cooperation appears to have stalled.

Evidently, these are the reasons why traders are losing interest in MIOTA as its average daily trading volume from the past three months have plummeted from $50 million to $10 million, while the coin itself still retains a relatively high market capitalization of $522 million and the presence on all major exchange platforms.

A quick glance at the chart of MIOTA from last year would be enough to see that price has been moving from one lower high to another with the tediously long periods of consolidation. The situation turned to worse when the coronavirus panic had affected the market - the price of IOTA hit rock bottom at $0.079 on March 13, its current all-time low. 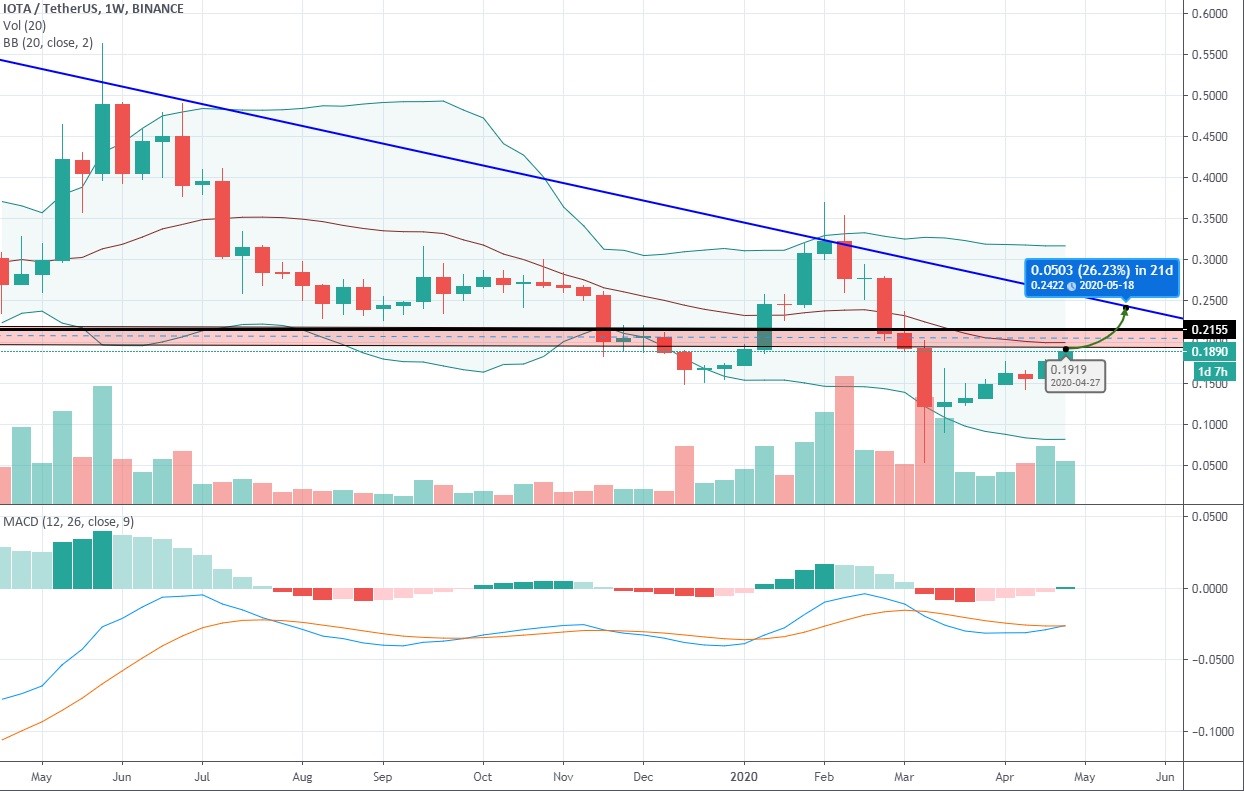 During that period, MIOTA lost 73% of its value, arguably the most among the high-ranked cryptocurrencies. Naturally, it should have been followed by the recovery, and it did in a long seven weeks, but the overall outlook with regard to this coin remains mostly negative.

Considering how large the buying volume was during the recovery period - it is comparable to the one that occurred during the bullish rally of December 2019 - February 2020 - the price action responded very weakly, having kept all those who bought on the first pullback in the bear zone for the three long weeks.

MIOTA did climb to the point of total recovery nonetheless, but the behavior of MACD shows that this kind of price movement is characteristic of an entry into a consolidation zone rather than the preparation for a trend reversal.

Please note that the oscillator hasn't ascended above zero, which is a borderline between the bearish and the bullish territory, since 2018 with all its bullish rallies. This could only mean that there’s a total absence of strong buyers in the IOTA market, especially in the current situation. Therefore, despite the fact that the MACD lines are about to cross to the upside, the price move that will follow won’t carry any strength, as it often happened before, when the coin was consolidating.

Right now, the currency has approached the first major resistance zone after the all-time low that also coincides with the middle line of Bollinger Bands, from which the price should push away to the downside, as it usually happens to the weaker coins.

There is a possibility of IOTA making another 26% dash to the upside, being incentivized by Bitcoin halving, but then it will bump against the macro resistance $0.24, which will constitute a perfect position for beginning to short this currency.