A few days ago, traders had to survive the unprecedented dump throughout all markets, which happened in less than 24 hours. All coins were affected on that day, dubbed the Black Thursday - the value of literally all cryptocurrencies was sinking faster than a stone goes to the bottom of the river.

IOTA didn’t remain idle when the massive panic sale occurred and lost 48%% at the day’s close, which was the market average on that day as the charts were brimming with red. Over the past four weeks, the coin has gotten cheaper by 63% - another fact that serves as a proof of bulls’ impotence at the moment.

Besides, the IOTA Foundation is still suffering the aftermath of a hack that occurred on February 12 and led to the substantial amount of MIOTA being stolen from users’ wallets. The real magnitude of the hack is still unknown - some claim that it amounted to $2.2 million -  but it was enough to force the team to shut down the mainnet, which has been brought back online only on March 10, right before the “big showdown.” 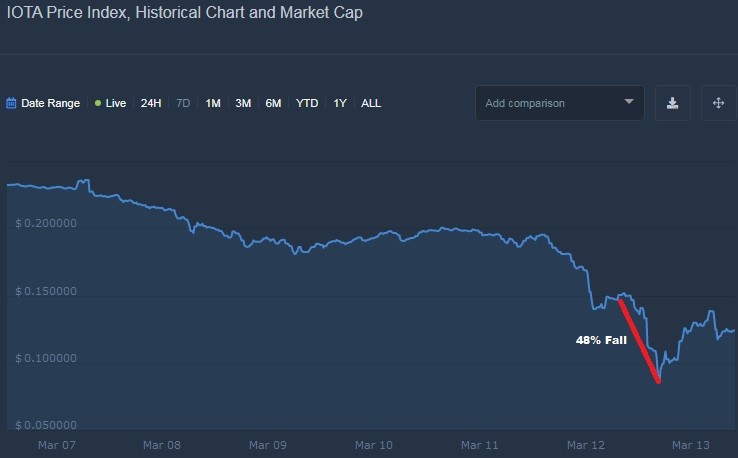 To IOTA’s credit, the company’s executive David Sonstebo has publicly ensured that all users of its proprietary digital wallet Trinity, which had been compromised during the hack,  will be reimbursed in full from his own funds.

However, this generous and noble gesture didn’t save MIOTA from sinking like a rock, along with the overwhelming majority of other cryptocurrencies. And with the ongoing turmoil everywhere in the world, it remains to be seen whether the hacked IOTA holders would be happy with getting more coins that are dramatically depreciating in value. All these twists and turns could add even more pressure on MIOTA and accelerate its potential fall to the new lows if the vehement panic sale persists.

IOTA’s future is unclear, but it’s undoubtedly not very bright

On March 12, the crypto traders were stunned by the developments on the market that had taken an unprecedented nosedive, disrespecting all available levels of support along the way. The next day, IOTA hit the all-time low at $0.08, and even $0.05 on some exchanges, having offered a golden opportunity for the most industrious traders to supplement their portfolios with the cheapest IOTA ever. Following that deep dive, the 24th coin made a swift comeback within the previous range but failed to go above $0.15 despite an enormously high buying volume. This fact shows that the bulls are still too weak to perform a recovery to the middle of the previous downfall range. 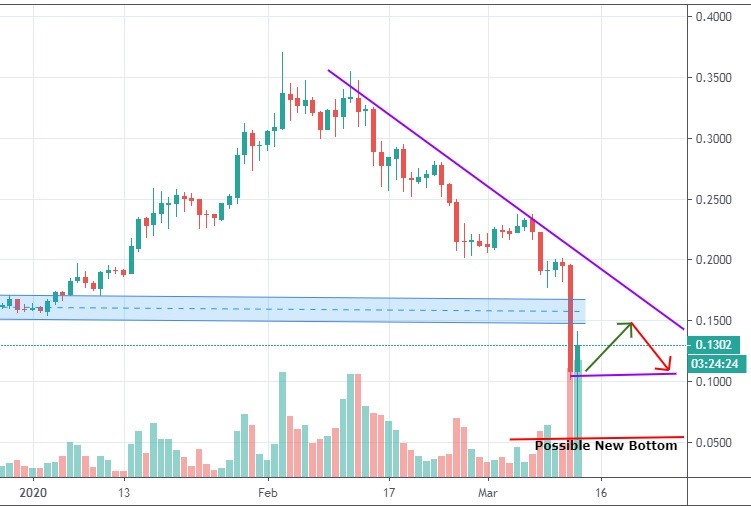 The level at $0.15 must serve as resistance upon the next attempt of the bulls to push IOTA up since the price had plenty of interaction with it in the past. Given that the hysteria on global markets has been showing no signs of calming down, the best-case scenario for MIOTA would be the consolidation between $0.15 and $0.011, after which it could go in either direction, depending on such factors as the scope of the coronavirus pandemic and the behavior of traditional markets. One thing is for sure - no one is expecting a miraculous revival of the previous uptrend as we are now trading in the dark hours for cryptocurrencies.

There is some hope, though, for IOTA to restore the price action characteristic of the preceding downtrend. But if we are being realistic, the coin is most likely to retest the all-time low a few times before it finds the strength to bottom out.