iExec (RLC) Is Ripe For Shorting

While most members of the trading community expected significant moves from Bitcoin after the halving event, it seems to have triggered a market shift that bears some similarity with the altseason. With Bitcoin losing its dominance and stagnating price-wise, alternative cryptocurrencies like iExec (RLC) saw the opportunity to have a significant price boost and even try to free themselves from the shackles of the perpetual downtrend.

The coin emerged on the exchanges in May 2017 and went through all phases of the crypto boom and the subsequent bear market, during which time it drove to the all-time high at $5.4 and then slid down to the deepest bottom at $0,14. Right now, RLC is priced at $0,64, having enjoyed a significant 30% price increase over the past week. 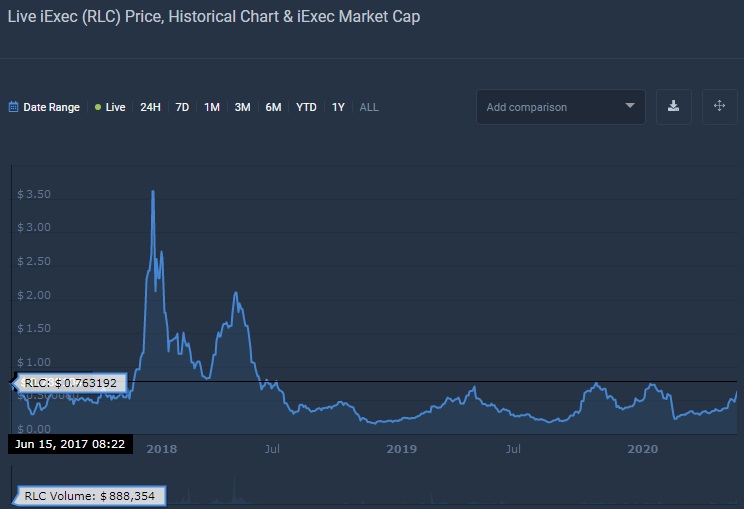 iExec is traded mostly on Binance (over 90% of the overall trading volume), but other high-liquidity platforms like Bittrex and Bitfinex also have a share of that pie. The analysis of trading volume from the last 90 days revealed noticeable inconsistencies - the volume usually travels between $600,000 and $3,4 million - although traders would need to know that nearly all significant influxes of volume were accompanied by the volatile price action on that particular day, thus make sure to arrange for an appropriate enter/exit tactics once they see the money coming in the market.

Before delving into a more scrupulous price analysis, take another look at the historical price chart above and note to yourself that RLC has a very prominent resistance area at $0.7, which the price has broken only once before, during the by far largest bull market of 2017/2018. Before and after that, RLC swims obediently within the confines of the horizontal channel, with its support level established at $0.17.

Given that the general sentiment in the cryptocurrency market is far from being bullish as the Fear & Greed index still inclines towards fearful, while the global markets remain largely uncertain, there are little to no prerequisites for RLC to break the long-established resistance at $0.7, which it will inevitably try and test next week. 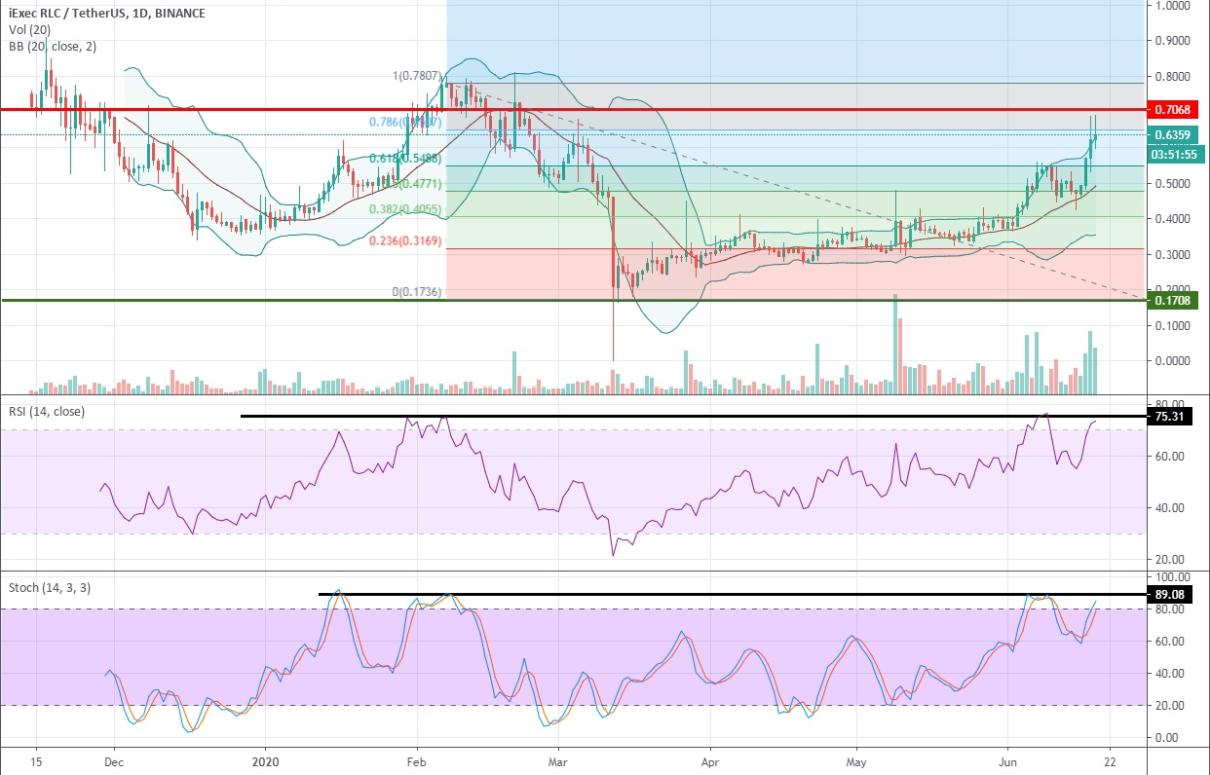 Basically, RLC provides a chance for an easy shorting play, which is especially lucrative for those traders who entered their positions when the price was at around $0.4. Apparently, the 14-period RSI provides accurate signals in this market, and right now it tells us that the price will soon hit strong resistance at 75 in the overbought zone, which will lead to a significant retracement, possibly all the way to the 0.382 Fibonacci resistance level or $0.4, price-wise. Stochastic supports the notion of the looming trend reversal as it is also close to the point of rejection at 89. The optimal price target for a shorting play would be between $0.04 - $0.5, or the middle line of Bollinger Bands.

iExec (RLC) In the Process of Resolving the Bear Flag