When it comes to the most prominent profit providers among altcoins, there are only two cryptocurrencies that did a better job than ICON (ICX) in a span of 30 days, namely Lisk and WAX - both gained 142% over the said period, while the value of ICX increased by 120%.

Right now, ICON occupies the 43rd position in global ranks, enjoying a soaring market capitalization, which has been experiencing a massive boost in mid-January that allowed it to rise sharply, from $60 million to a more impressive $254 million at the interim peak of the current bull rally. Presently, the market cap of ICX amounts to $173 million. The trading volume, however, has been visibly degrading since early February, going down from $439 million across all cryptocurrency exchanges to a measly $38,6 million at the time of writing.

The price action of ICON with the same time interval has been following the trading volume fluctuations to the letter by going in a retracement on exactly the same date when the volume began plummeting. 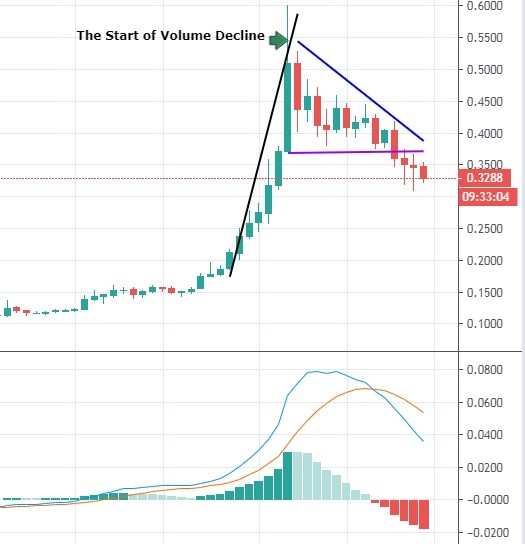 Given that the volume continues to fall - from $76 million to $38 million in the last five days - we can presume a substantial possibility of the price moving further down south on the daily. This notion is supported by the following factors:

ICX is yet to establish a concrete higher low from which it could potentially bounce back to the upside, so as long as it stays above $0.25, there are not many reasons to panic, unless, of course, you haven’t bought this coin at the top of its upswing;
The price has breached the bullish flag formation to the downside at $0.38, which usually serves as a sign of further decline unless it manages to recover above $0.4 in a matter of three-to-four days.
The MACD indicator shows the signal-line bearish crossover as the MACD line has crossed the signal one for top downward, with histogram confirming both lines moving further away from each other, which implies that the price movement is about to accelerate in the direction of the crossover.

Therefore, traders who prefer capitalizing on price swing on daily charts shouldn’t rush into the ICX/USDT market and give it a chance to show its true intentions, of which there were no clear indications as of yet. The most practical thing to do now with regard to ICON is to monitor the price and look for any distinctive pattern to emerge.

The situation on larger time frames

The weekly chart shows that traders should have anticipated a strong push back by the bears because on February 4, ICX reached an immensely important resistance level at $0.44, which marked the formation of the double top reversal pattern back in April and May of 2018, the last of which had put the dagger in the ICON’s minor bullish trend. 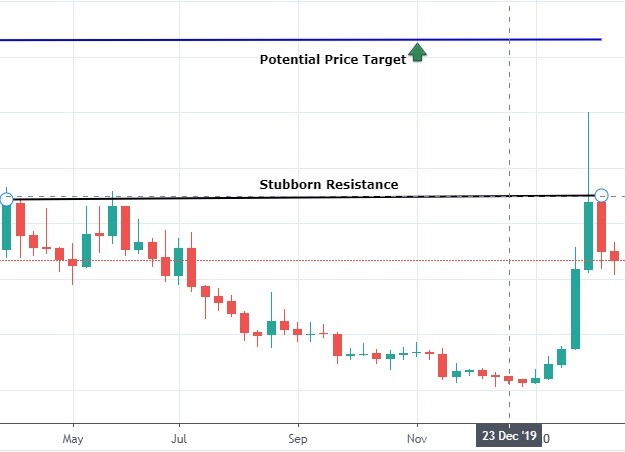 This brings us to an even more critical strategic aspect of ICON trading than the depth of its current retracement. Once the price bounces back above, thus present a chance to profit on the upswing, and tests the said resistance again, start following this coin closely: if it breaches the level successfully, it could move swiftly to $0.73. Otherwise, we would see the formation of another double top reversal.