Little by little, the cryptocurrency market is showing signs of recovery following one of the biggest one-day crashes in its history. Traders will remember this gruesome period as something like a process of natural selection, the survival of the fittest, so to speak, but it’s probably for the best because this space has become oversaturated with sub-par blockchain projects that do nothing except for littering the rankings.

ICON will definitely remain afloat since this coin has shown a sufficient fortitude in the face of the notorious crisis that has hit the markets like a cannon shot. Unfortunately, ICX’s gains from the last year didn’t survive this brutal attack from the bears and now account for -32% from that period last year. The same goes for the monthly performance, which is now 21% in the red against USD. However, ICON has proven to be a better performer than the best two cryptocurrencies as it outdid Bitcoin by 7% and 33% with regard to Ethereum. It's all-time return on investment is still on the negative side (-44%), but it is mainly due to the market massacre rather than bad fundamentals or the general lack of interest in the coin.

Fundamentally, this coin is quite promising as it deals with cross-blockchain operations, which is quite an acute problem for this space. Therefore, ICON could even be a worthy addition to an investment portfolio since it has all the necessary prerequisites for making its way to the top 20 once the cryptocurrency market busts out of the slump. But for the time being, traders need to concentrate on ICX’s price action, particularly on accumulating ICON during the present consolidation phase.

ICON went through the same path as all other cryptocurrencies during the mid-March annihilation - an abrupt price decrease by 57%, followed by a prolonged period of consolidation. What’s noteworthy, though, is that ICX stopped just a few cents short of the all-time low at $0.103, from which it began the mind-blowing 477% bull run at the beginning of 2020. 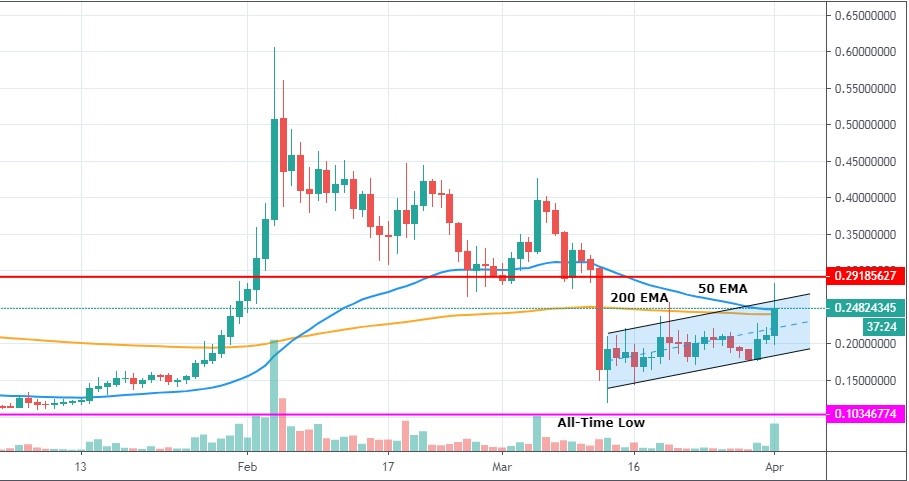 Obviously, a market participant (or participants) who had taken such a huge position in January had successfully locked the profits between $0.5 - $0.6, stopped the price from falling below the all-time low, and is now slowly gathering a new position of considerable size. With all due respect to ICON and its fundamentals, this coin has a market capitalization of $123 million, and the majority of the volume is spread between only three exchange platforms: LATOKEN, Upbit, and Binance. This points at a probability of price manipulations, which is not necessarily a bad thing for traders, given that they find the appropriate moment when to jump on the bandwagon.

Now is not the best time to go long on ICON because the cryptocurrency market is still very unstable, and we could see ICX falling below the all-time low on any given day. Nevertheless, the overall tendency appears to be bullish, with the price actively testing both the 200-period EMA and 50 EMA - rising above them would signal about the possibility of a trend reversal. But first, ICX will face a historical level of firm resistance at $0.29, near which the next consolidation area would emerge.