HyperCash Suffers Along With the Rest of the Cryptocurrency Market

The situation on the cryptocurrency market changes faster than you can say “hashrate.” Just a couple of weeks ago, traders had boundless optimism, dictated by the promptly growing prices of altcoins, with Bitcoin only slightly lagging behind. And now we are in the midst of a massive correction, if not to say a crash, thinking whether the start of the year rally was one big fluke.

Nevertheless, a good trader needs to adapt to any situation and any market, even the one that doesn’t have a particularly large trading volume, like HyperCash (HC).

HyperCash is the type of coin that rarely gets on the list of favorites of the majority of traders, though it does have the fundamentals that are worth consideration, and it tends to adhere to the general sentiment on the market. Speaking of its capability to bring gains, HC is just like any other middle-ranked cryptocurrencies that can pump by 100+% in a short period of time only to get lured in a severe correction later.

HyperCash belongs to a new generation of coins that got released in late 2019, though the company that stands behind the currency emerged in 2017. The technological solution that HyperCash brings to the table is quite fresh as it deals with an issue of inter-blockchain communication and data transferring, as well as quantum resistance, which might seem like a distant problem, but, nevertheless, it’s going to catch up with the crypto industry sooner or later. The system employs zero-hash proofs and a blockchain/DAG hybrid, accompanied by a joint PoW/PoS consensus algorithm. 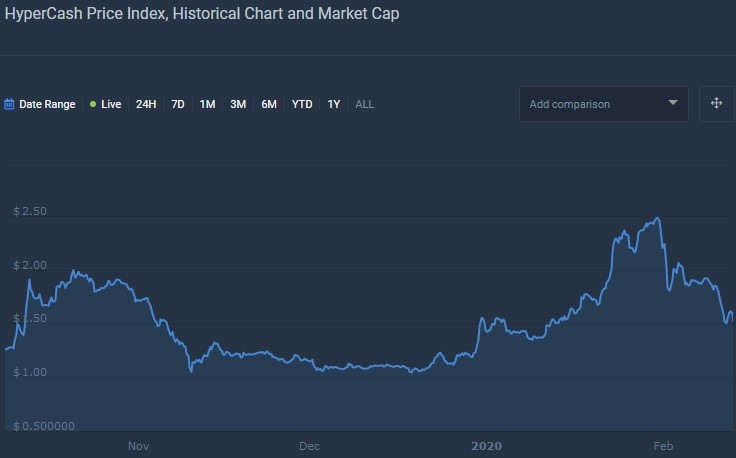 But even though the fundamentals sound convincing, the all-time return on investment still remains negative at -66.88%, but in the current realities of the crypto market, this deficit could be covered in just a month-long rally. Right now, however, the bulls have lost the initiative, and HC is tanking severely, having lost 21% in a week and 9% over the last day.

The bears are in full control

In the first days of 2020, HyperCash went on a rally along with the rest of altcoins and gained over 100% in five weeks. From its starting position at $1, HC skyrocketed to this year’s maximum resistance level $2.5 and even pinned this level with a huge wick that had briefly penetrated the $3.7 level, with what appears to be an inverted hammer pattern. 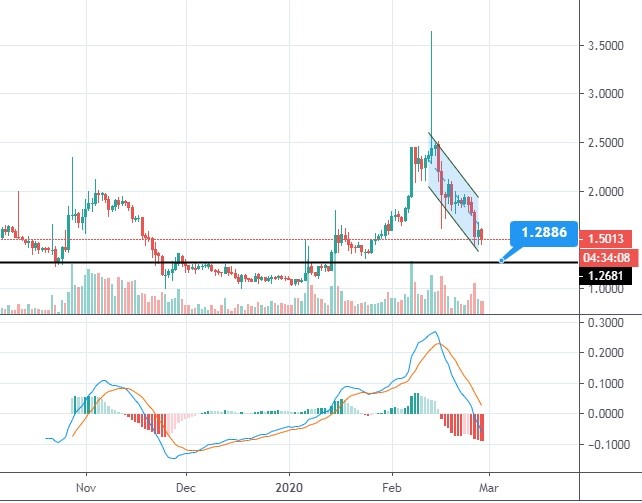 The situation on the daily doesn’t look particularly well for HyperCash since it has entered a distinctive downward channel, which might eventually lead it to a firm support level at $1.28 that has served as a borderline between the consolidation at the bottom and the bullish phases. Given that all indicators are pointing at the continuation of the price degradation: MACD is well below zero, while RSI is approaching the oversold zone at the speed of light, the price fall would persist.

Therefore, now is definitely not the time to go long on HC, and if you have entered the position somewhere around $1,8, consider cutting your losses because the market decline, instigated by various factors, will keep gaining momentum.