In the last several years, as the token market started to increase, ICOs, STOs, IEOs, and other token sale models were everywhere. Everyone who had an idea became fully capable of launching their own token, which also includes pretty much every big exchange out there. This includes Huobi Global, a Singapore-based crypto exchange which has been acting as a rising star in the industry for a few years now.

As a token of a large, popular exchange, many see Huobi Token as a cryptocurrency that does have a future — one that will survive when other altcoins fail. Whether or not this will happen remains to be seen. However, coin holders are still interested in the coin, its performance, and its potential future.

Huobi Token (HT) is a coin that saw the launch in early 2018, just as the crypto prices started their severe drop. As a year-and-a-half old coin, it is understandable why it doesn't have an especially long and eventful history. However, it is also worth noting that the coin performed rather well so far,

Immediately after its launch back in February 2018, HT saw its price go between $1.20 and $1,45, which was followed by a small surge that took it to a resistance level at $2.40. The resistance proved to be too strong, however, and the token quickly dropped down to its initial levels. However, in late March, the coin started a small surge yet again, which ended up growing into a big one — one which took HT to its all-time high. 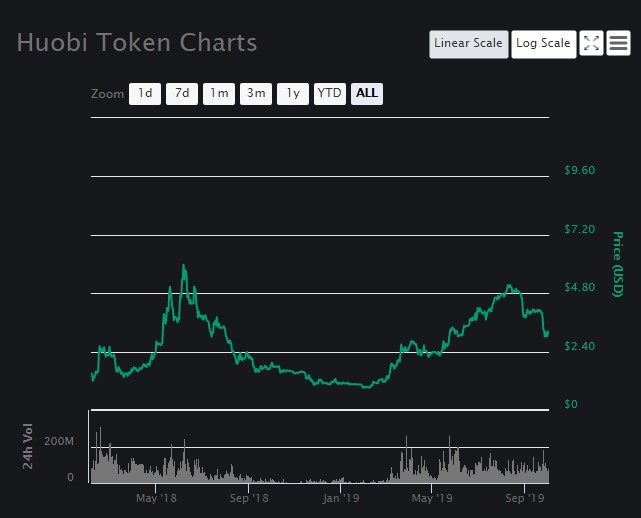 Now, for most other altcoins, this was a period when a small recovery took place. The April/May 2018 spike up is visible on the chart of every coin that existed at the time. But, it is clear that most of them were not even halfway towards their ATHs, and this brief recovery only served as the quiet before the storm.

For HT, on the other hand, this was its 'main surge,' the one that took it to its own ATH at $6. Huobi Token hit this level in the first half of June, after which it started dropping once more, together with the rest of the altcoin market. Its price drop was pretty steady ever since, and it even took the second market crash in November 2018 reasonably well, and much better than any other crypto. However, it still dropped significantly during the rest of 2018, resulting in the price of $0.90 by the time the year had ended.

The situation once again took a turn for the better in 2019, where HT started growing as soon as in early February. As usual, the growth started slowly, only to turn into a sudden surge, especially when Bitcoin joined in on April 1st. The coin originally struggled to breach the $2.40 resistance, although after doing it, it quickly surged up to $4.80. For a time, it seemed like it will actually manage to hit its old ATH, and its growth continued well after all of the other coins entered a correction period.

Unfortunately, around mid-August, HT hit a barrier that knocked down its price a few times, resulting in its current value of $3.15.

Where will HT go next?

The main question now is whether this coin could grow again or not, and it is likely that it can and will. While its price is currently following the market behavior, HT often acts on its own. It starts growing early, albeit slowly, and only properly joins the surge after being encouraged by the rest of the market.

Its drops are also not nearly as severe as that of most other coins, and its price is still quite high up when compared to the beginning of the year. In fact, the coin has performed better than Bitcoin, when compared to what its price did in 2019. All of this, combined with the fact that it is supported by the Huobi crypto exchange, makes HT a decent performer and a coin likely to stick around. Huobi Token takes every opportunity early on and with no hesitating, meaning that it is not nearly as passive as the majority of the market.