It has been an extremely fun month for both the cryptocurrency and the stock market, which saw the astronomical rise of Dogecoin (DOGE), XRP (XRP), and GameStop (GME). Over the past few weeks, traders witnessed eye-popping rallies that helped someone to make a pile of money, while others got "FOMO'd and rekt." And after the dust has settled a bit, we decided to analyze the main factors behind all those spikes, namely the social media and the influencers that seem to have an overwhelming impact on the markets.

Memes and pumps - that is so Wow!

Memes have long become an indispensable part of Internet culture, a perfect tool for conveying a message in a hilarious way. But as it turns out, memes can not only make someone crack up after reading a witty punchline but also make him or her a boatload of money.

In 2020/2021, Dogecoin (DOGE) became one of the most pumped altcoins on the market, the value of which has risen by the mind-blowing 2054% at the time of writing. The price of the coin under review was up by an additional 85% at the peak of the recent mega-rally that turned DOGE into the hottest buzzword across all financial media. The hype created around the meme coin has even overshadowed the mighty Bitcoin, which, by the way, has just breached the ultra-important price level at $50,000 that is likely to become an axis for the price action throughout the current year, unless BTC moves all the way to $100,000. What's so special about DOGE? Nothing...but fun

But it was DOGE that stole the show and became the most expensive meme of all time. Just a quick reminder that Dogecoin emerged in 2013 as a fork of Litecoin (LTC). Conceptually, it is a coin that represents a not overly sophisticated crypto-payments solution that was made into a core component of a tipping system on such popular social media outlets as Twitter and Reddit. The Dogecoin's logo depicts Shiba Inu, a dog of Japanese breed, that was a popular meme some years ago. The meme consists of the image of the dog surrounded by phrases in broken English, such as "Much morning" and "So scare."

The founders, Billy Markus and Jason Palmer, were upfront and honest about the absence of any intentions to make DOGE into something big and important. They were okay with its status as a fun currency that serves the needs of a growing community of social media users. So much so that they have literally abandoned the project at a certain point. The Dogecoin ecosystem hadn't undergone any upgrades or maintenance whatsoever in nearly two years as the leading developer Ross Nicoll hasn't done any amendments to the open-source protocol since June 2019. But after witnessing this bullish frenzy, the team has resurfaced and got back to work, with the promise to bring the system up-to-date in order to keep DOGE fundamentally sound.

And as if to stay in line with the whole "silly joke" thing, Billy Markus revealed that he had sold all DOGE holding in 2015, even before the crypto bubble of 2017/2018 began to inflate, for the sum equivalent to the price of used Honda Civic, which is less than $10,000, we suppose.

This ironic story does bear some similarity with that of Laszlo Hanyecz and his purchase of pizzas for 10,000 BTC that would now be worth half a billion. But the difference between the two stories lies in the fact that Markus had actually quit the project because of continuous harassment coming from community members who had a different vision of the project's development, and also due to the financial scrutiny he had been experiencing at the time.

So, how did it happen that the cryptocurrency that wasn't taken seriously even by its founders had ballooned to the market capitalization of $10 billion and briefly found itself among the top 10 cryptocurrencies? Truth be told, Dogecoin is the prime example of how a sub-par product could get extremely overvalued if endorsed by a globally recognized person, which in the case of DOGE happens to be Elon Musk, the richest man on the planet with a net worth of around $190 billion. His Twitter activity is being followed by 44.7 million people, an audience big enough to move any financial market when persuaded.

Upon analyzing Musk's Twitter history, we found six instances of him mentioning a cryptocurrency: four out of six posts were related to Dogecoin, and two mentioned Bitcoin. The first one dates back to July 2020, when the tech visionary tweeted: "Excuse me, I only sell Doge!" and attached the meme of the DOGE cloud running over the contemporary financial system. The initial post was most likely the reaction to the first considerable price pump that had been initiated by TikTok users that got the name the Dogecoin TikTok Challenge.

The scheme was quite simple: the user nicknamed @jamezg97 posted a video where he was actively shilling for DOGE, urging people to devote as little as $25 to a shamelessly cheap cryptocurrency and then scoop up around ten grand once the price reaches $1. That video got over 800,000 views and catalyzed the first pump that catapulted the price up by 95% in a matter of hours and caught Musk's attention.

And while it was nothing but a blunt pump scheme, it wasn't without solid logic. Dogecoin indeed possesses three main traits necessary to become attractive for the unsophisticated retail investors, a lot of whom haven't even reached the legal drinking age. At that time, DOGE was super cheap, trading at around $0.002 per coin. It had good recognizability due to being placed relatively high in global ranks - at that time, DOGE was somewhere near the 20th place. It also had a decent but not overly large market capitalization of $150 million, enough to ensure a swift bullish reaction of the market to the influx of pumpers and those who entered the market being affected by the FOMO. Lastly, Dogecoin has a simplistic concept behind it that is appealing to the younger audience that doesn't want to get into the nuts and bolts of tech-based cryptocurrencies and prefer the understandable meme-coin. Who wouldn't want to see the crypto with a cute mug on it going to the Moon, right?

The TikTok Challenge didn't achieve its goal of pushing DOGE up to $1, though it created a clear precedent that a simple call to action from a social media influencer might impact the market in a significant way, ultimately creating a digital gold rush that spread out across both cryptocurrency and stock markets.

However, the 95% pump turned out to be an appetizer before the main dish that was served on January 28 when DOGE began its meteoric rise. On that day, the price had shot up by 400% and attracted a huge wave of retail traders who got caught up in the FOMO. 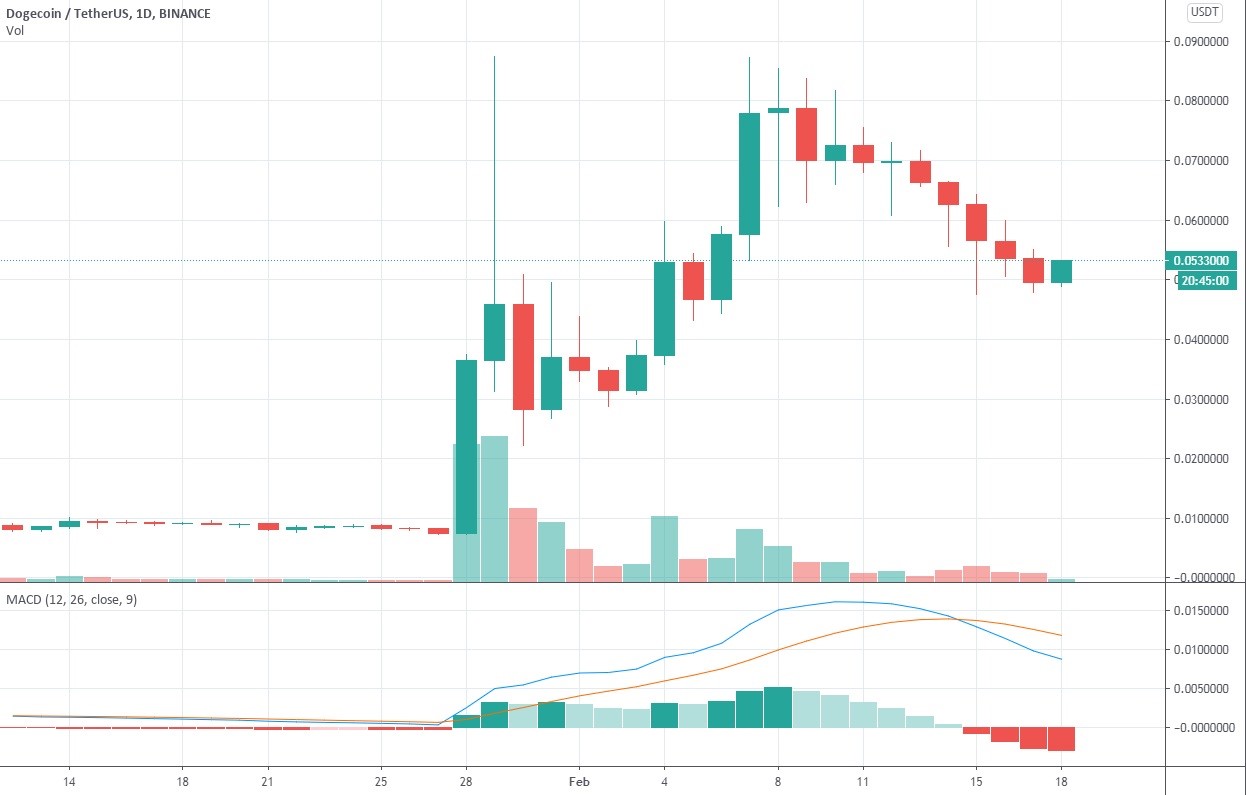 This enormous influx of profiteers resulted in the continuation of the ferocious pump that resulted in the price adding another 180% in 24 hours, ultimately bringing DOGE to the new all-time high at $0.087. On that very same day, Elon Musk posted a meme that depicted a cover of a glossy magazine named Dogue, a pick at a fashion magazine Vogue, but with a picture of a dog instead of a fashion model, obviously hinting at the "fun coin." The next day, he threw more fuel into the fire by adding #bitcoin to his Twitter bio. Later, he explained this decision via another tweet that said, "In retrospect, it was inevitable," probably meaning that he couldn't have resisted the power of BTC (and DOGE). 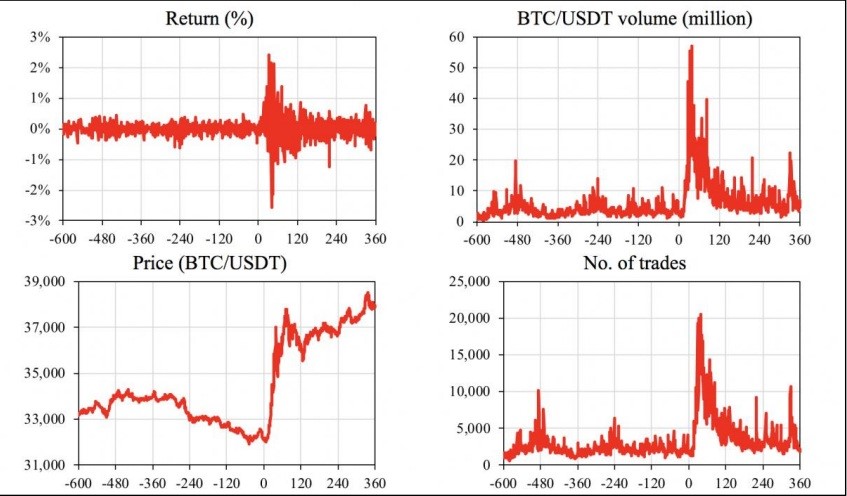 Within three hours after Elon made amendments to his Twitter bio, the price of Bitcoin catapulted from $32,000 to $38,000, a move that constituted a 15% price increase in such a short period of time in the market that already had the capitalization of around $1 trillion. 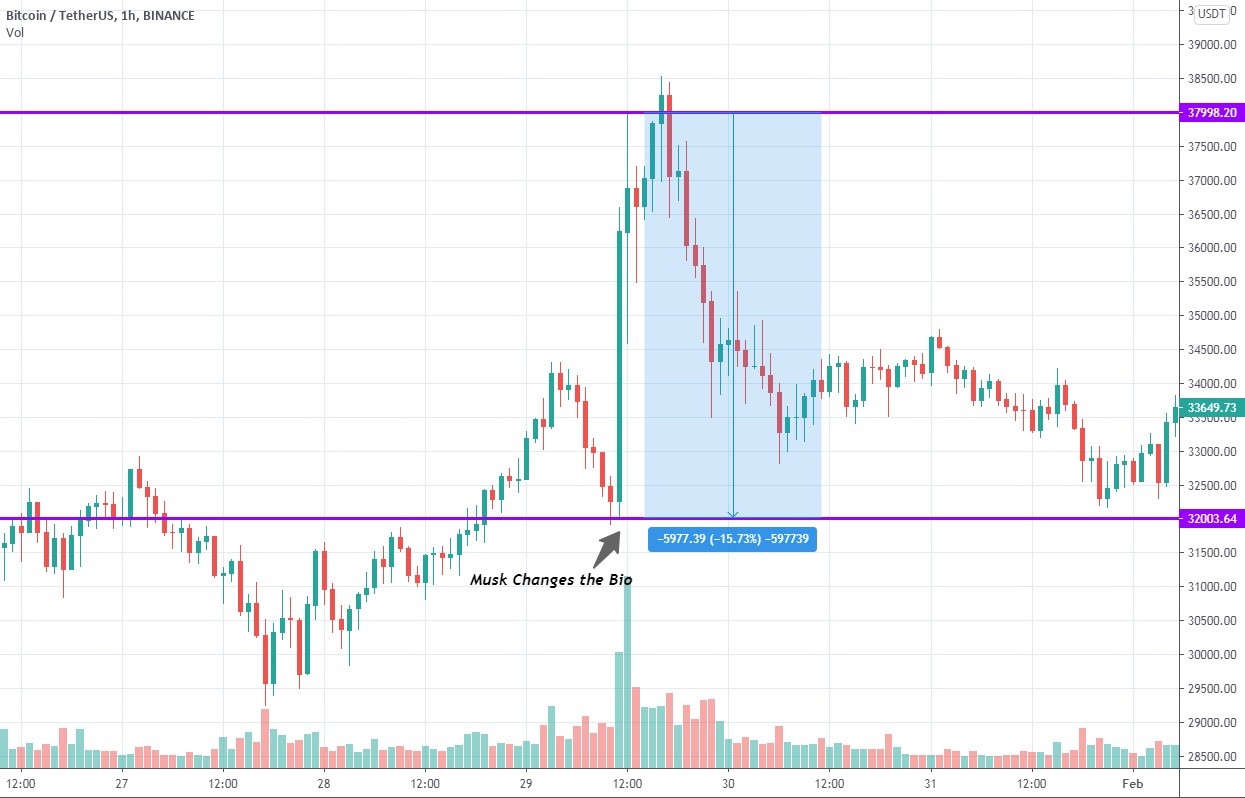