To paraphrase a famous marketing slogan: HedgeTrade (HEDG) was made by traders for traders. From the fundamental standpoint, HedgeTrade represents a blockchain platform that affords the opportunity for the finest traders to share their insight into this craft and predict the future cryptocurrency prices, while the less experienced and knowledgeable traders can purchase these forecasts (HedgeTrade dubs them Blueprints) by virtue of HEDG tokens.

One can say that these are the characteristics of a customary social trading platform, but HedgeTrade does possess a feature that allows it to stand out from the crowd. While other platforms tend to carry little to no responsibility for incorrect price forecasts, the Blueprints are incorporated in smart contracts, which are designed specifically to release the payment to the predictor’s wallet only if his price forecasts were accurate. Otherwise, the deposited crypto is sent back to the payer’s account.

Moreover, the traders who generate the prognoses are obliged to stake a certain amount of HEDG, thus adding more accountability and trust in their work through this token staking model. In essence, the platform hedges traders against the risks of relying on inaccurate price forecasts, hence the name of the coin.

This fact probably explains the increasing popularity of this relatively new cryptocurrency, which is depicted in its surging price chart.

We called HEDG a new cryptocurrency because it appeared on the market at the end of December 2018, traded at a price of $0.0005 per coin. Judging from the all-time chart below, HEDG has made tremendous progress over the course of the year, which commenced synchronically with the bull rally that the entire market had experienced from May till August. 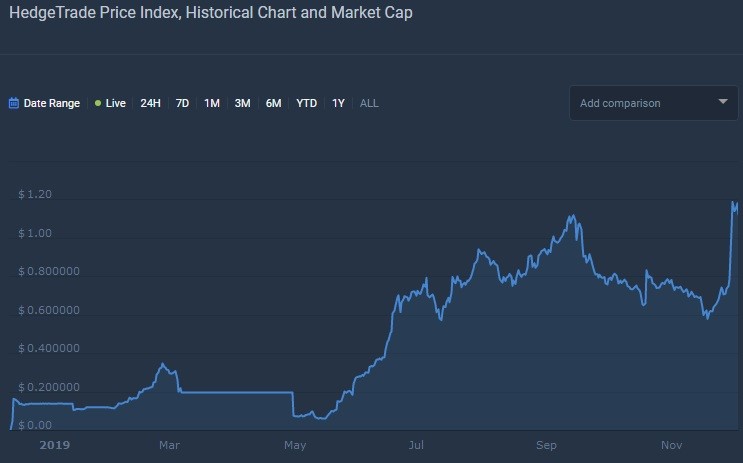 The first price peak happened in September when HEDG was valued at $1.09. A mild correction followed it all the way to the previous support level of $0.6, from which the coin has displayed a powerful upward impulse that took HedgeTrade towards its all-time high of $1,33. The price record was established only a few days ago, on December 6. As of the time of writing, the value of HEDG has rolled down a bit to $1.12.

The current standings and future prediction

As we can assume from this weekly chart, the cryptocurrency has been hitting resistance at $1.2 while maintaining the support at $1.1, thus consolidating before the next move either to the upside or to the downside. 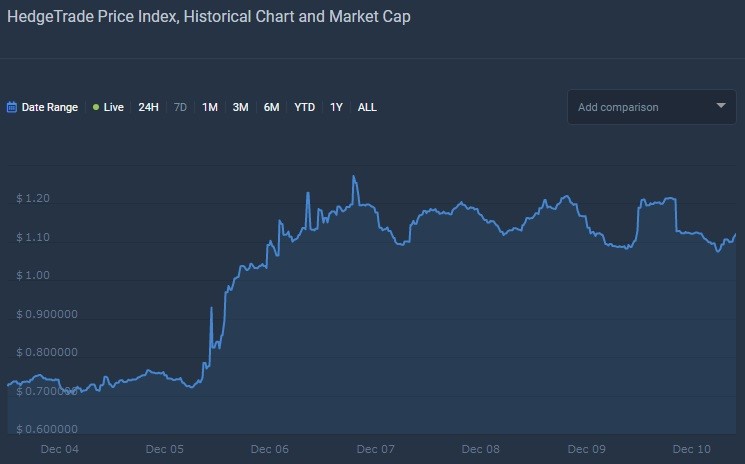 And while the majority of cryptocurrency traders were focusing their attention on the price action of Bitcoin, HedgeTrade has been outperforming the dominating cryptocurrency throughout the second half of the year. Therefore, while Bitcoin continues to dangle around the $7,500 - $8000 zone, perhaps it is time to divert attention to the coins like HEDG, which might maintain its upward momentum in the near future. 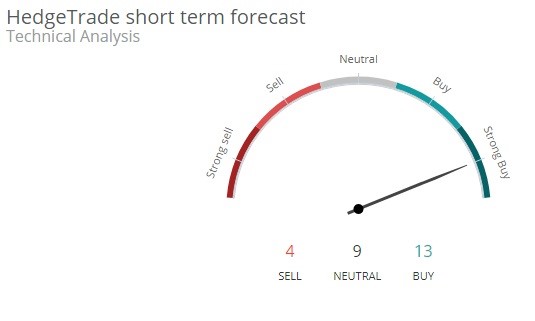 In terms of technical analysis, the 14-day RSI and Stoch RSI are suggesting to sell the coin, but this unfavorable prognosis is vastly overpowered by the SMA and EMA showings on all timeframes that hint at a strong buy. MACD and Stochastic remain neutral. To summarize, if you are a registered trader at Bitrex, HitBTC, or P2PB2B, then you should at least consider getting into HedgeTrade.