Even though the global hype around the cryptocurrency market, and the mega-profits associated with it, ended when the bubble had burst, and Bitcoin took a dive from $20,000 to an area just above $3,000, one still can find coins, the price of which has been pumping like mad over a protracted period of time.

Released in October 2018, HedgeTrade (HEDG) started out rather quietly by swimming below the surface of $0,5 for around six months, but then caught the bullish wave that emerged in May 2019 and never got off it since. 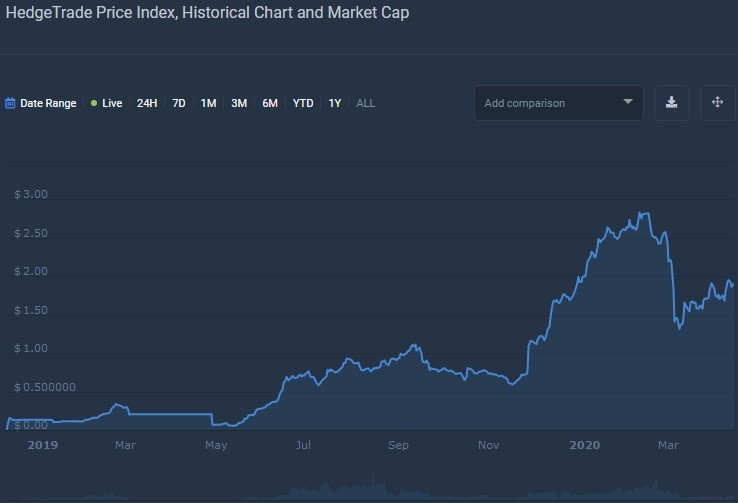 Whereas the other inhabitants of the cryptocurrency market went through two bullish phases, and subsequent corrections, HedgeTrade has been in an uptrend all along, making higher highs on large time frames and putting up gains that can astonish even the “moon boys.” The 2,557% price appreciation in a year is something that traders haven’t seen since 2017/2018.

But, as it usually happens with all altcoins, the imagination-boggling price expansion will run its course sooner or later, after which the coin is going to submerge back to the bottom for an indefinite period of time. The reason for the imminent subsidence (but not a failure) of HedgeTrade is that this cryptocurrency is not backed by serious fundamentals that could make a weighty contribution to the entire space.

Just a quick reminder that HEDG is a native currency of a blockchain platform for social trading, where traders get rewarded for making accurate price predictions. The concept itself is certainly of use for that particular field, but it covers a relatively narrow niche; therefore, the demand for HedgeTrade will eventually hit its natural ceiling, upon which the value of the coin will decrease substantially. But before that happens, traders must extract as much profit as possible from the ongoing uptrend, which HEDG is maintaining despite the uncertainty and fear that is encompassing all markets right now.

Luckily for the long-term investors, the market meltdown didn’t wipe out all previous gains that HedgeTrade had made. The coin, which is already ranked 23rd despite a somewhat young age, has the all-time ROI of 1,308%, which is likely to increase in the next few months, should the coin continue to act in the counter-flow to the general market. 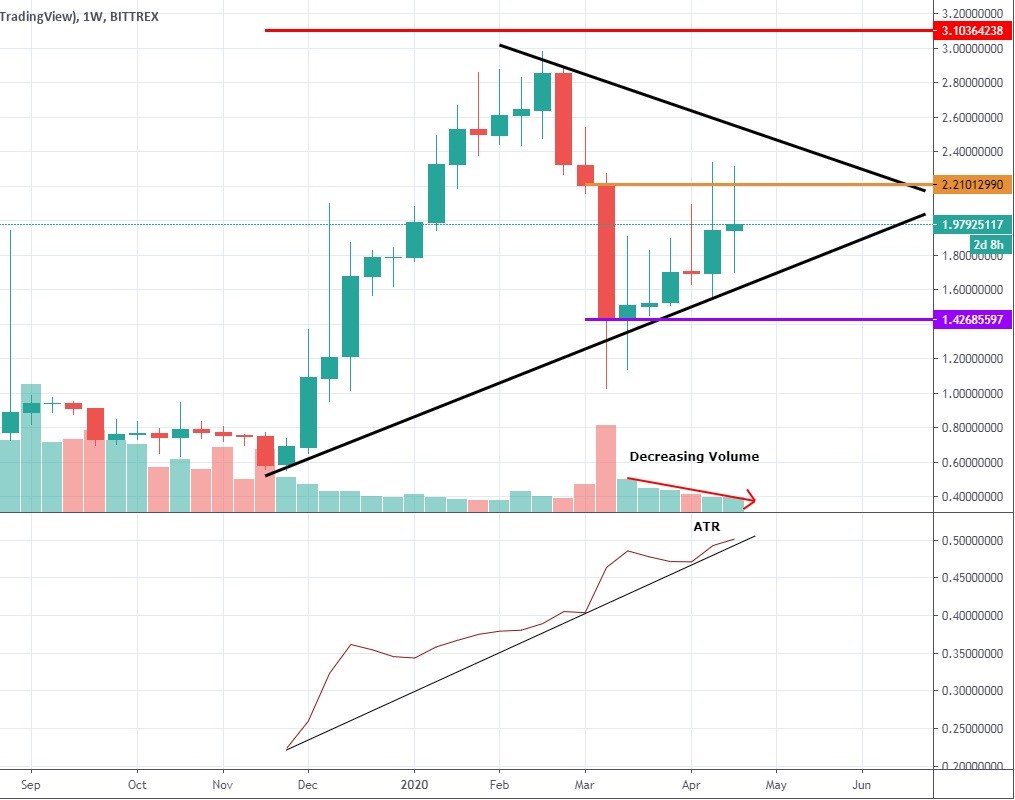 While other cryptocurrencies were going head-first into the all-time low territory, HedgeTrade has casually made the lower high at $1,42 , although it almost pinned the $1 level with the lower wick, and continued its hike to the upside, forming what appears to be a symmetrical triangle on the weekly time frame.

Therefore, traders should prepare for the prolonged period of consolidation, though the movement inside the triangle could be volatile since ATR is still at 40. The fact that the buying volume has been gradually decreasing over the past six weeks shouldn’t lead traders to the conclusion that the price will inevitably have a breakdown since the massive surge that commenced at the tail end of 2019 occurred at the time of a similarly decreasing volume.

Entrenching above $2.2, which is the open of a weekly candle associated with the market fall, will serve as a signal that the coin is inclined to make the new higher high at $3.1. Should HedgeTrade start retracing from $2.85 - a previous higher high - it would mark the formation of the double top pattern. In which case, traders must consider the possibility of entering short positions.