Hedera Hashgraph Pumps Hard, But Would It Crash Harder?

The further we go into the year 2020, the bigger is the conviction that the much-awaited altcoin season has finally arrived. There were many doubts regarding whether these coins would even experience a serious growth that could be even remotely compared to the boom of 2018. The Internet was flooded with skeptical prognoses, conspiracies, and tons, and tons of memes.

Nevertheless, the last months and a half was the time when altcoins have been truly shining, with Hedera Hashgraph (HBAR) being among the most prominent gainers. 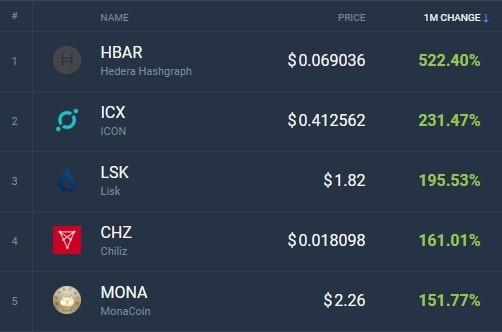 Top altcoins of the last 30 days

You can see for yourselves that HBAR has had literally monstrous gains in a span of the last month, thus attracting the attention of many retail traders, who consider themselves the “moon boys”, in other words, those who are striving to trade somewhat risky coins which, nevertheless, hold the promise of miraculous gains. It’s obvious that Hedera Hashgraph fits right into that alley.

Hedera Hashgraph is a cryptocurrency that appeared on the horizon last September and has immediately broken into the Coinmarketcap top 50 ranks. As of now, it occupies the 39th position, having a relatively moderate market capitalization of $221 million, though it has more than tripled in size since the beginning of its unprecedented massive rally. Before that, the average market cap of HBAR didn’t exceed $30 million.

It should be noted that even despite the 500% gains, Hedera Hashgraph has a negative all-time return on investment of -43%, due to the fact that it has had a disappointing debut on the cryptocurrency market, as its price had crashed terribly, from $0.15 to $0.027 in a matter of a week after its official listing, so now the price is merely recovering. 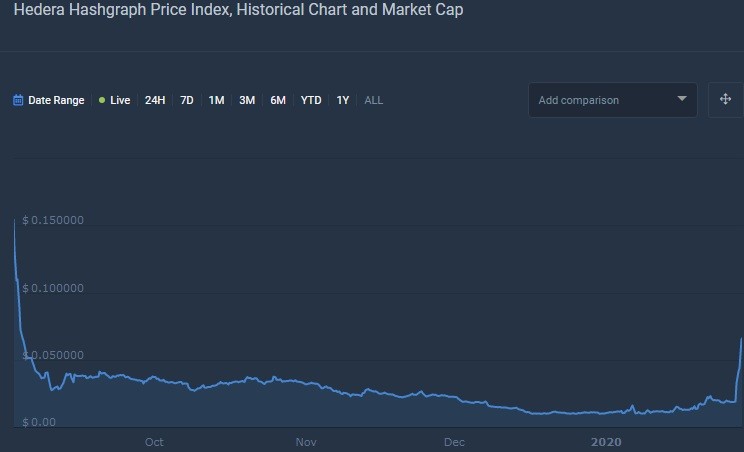 Nevertheless, thanks to the mind-blowing gains of the last month, the trading volume of this coin has also skyrocketed to $200 million, which is a more than impressive showing, especially compared to its competitors Lisk and Bitcoin Gold. HBAR is traded mostly on Binance - on USDT and BTC markets.

Fundamentally, Hedera Hashgraph represents a decentralized blockchain network that accommodates crypto payment gateway, data management service, smart contracts, and various means for the development of decentralized applications. It appears that the project behind HBAR has already partnered with such well-regarded entities as IBM, Deutsche Telecom, and Boeing.

HBAR on the charts

The main question for those who didn’t manage to jump on the bandwagon a few weeks ago, when the coin was gearing up for the bullish blitzkrieg, is whether this coin has any steam left, and could it’s rally be just a part of a pump-and-dump scheme? 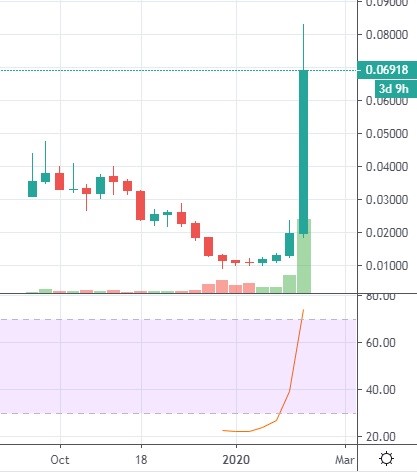 The weekly chart indeed shows an immensely large green candle that took the RSI straight to the overbought area. We would need to see the next weekly candle to be able to make a prognosis about it’s further move. But so far, it appears that the bears will push the price significantly, to an area between $0.04 - $0.05. 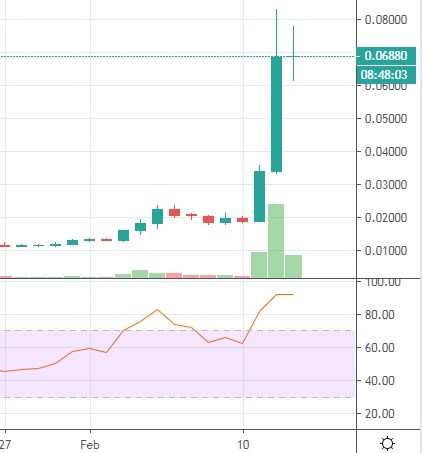 On the daily chart, we see the price being extremely high above 70 on RSI, which screams that the price should drop significantly. Besides, we might be witnessing the formation of an evening star pattern on the current candle, which is still in need of confirmation. The logic dictates that the price of Hedera Hashgraph should decline soon, but given the ongoing pump throughout the entire market, it could be postponed by a few days to a week.