Golem is not the type of cryptocurrency, the price action, or potential gains from which would have traders lying awake at night. It is sitting close to the bottom of top 100, currently ranked 83rd, to be precise, and doesn’t belong to the cohort of the most prominent gainer, especially in the year 2019, during which Golem had decreased in value by 1,7% - not a lot, but certainly not the type of performance we would expect from the prospective coin.

However, come 2020, GNT began silencing the skeptics by adding 88% in value over the period of the last 30 days. It had even outperformed Bitcoin by 73% and the currently powerful Ethereum by 24%. Perhaps this year would turn out to be the crowning moment for Golem after the bear market of 2018/2019, possibly bringing it a bit closer to the all-time high of $1.43, which is still 96% away. But first, Golem would have to break the highs of the previous year that had been established at the level of $0.11 that could prove to be a mighty strong resistance which, as you can see on the chart below, the price had punctured that level at least nine times before but to no avail. 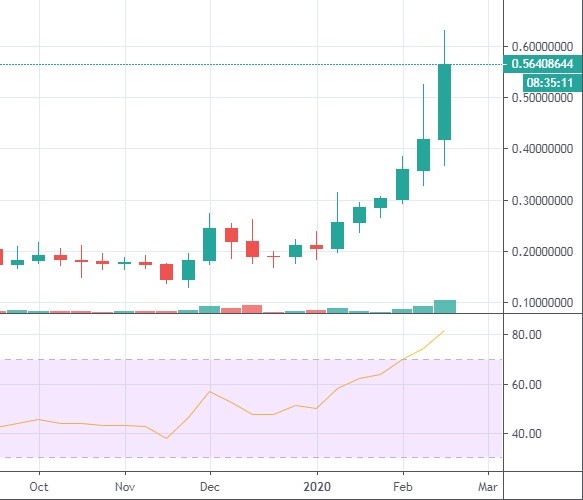 On the weekly chart, Golem shows signs of the commencing retracement that could transform into the bullish flag, the exit from which would probably catapult the price straight to the said level. But before that, the price could bounce around the flag channel, between $0.055 and $0.07. This scenario would come to fruition only if the overall bullish sentiment on the market persists, which is highly likely, given the steadily growing market capitalization and the overall trading volume.

Speaking of which, the daily trading volume of GNT is far from being stable as it is capable of leaping from $5 to $35 million, and then back to $9 million, in a matter of three days, causing large upper and lower wicks on the daily chart. 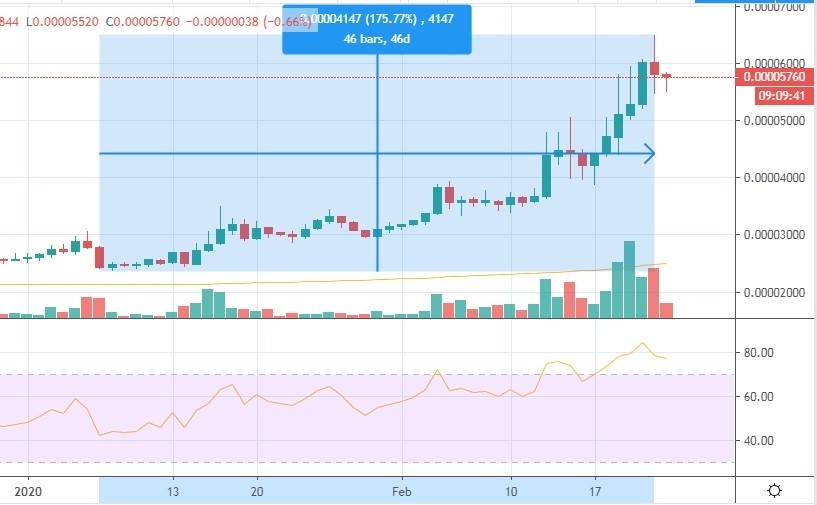 The same chart shows the evident beginning of a retracement after ten consecutive days of growth. Once the price has hit the transitional maximum at $0.095, which was caused, in no small way, by the unnatural spike in trading volume on that day, it had lowered below a very distinctive resistance at $0.075, and then the bears began pushing GNT even lower.

Right now, we see the formation of a picture-perfect bullish flag that is yet to break out in either direction. However, there are several factors that indicate the possibility of the price dropping below $0.0062, which constitutes the lower part of the flag:

Firstly, the MACD line is about to cross the signal line down from the top, meaning that the bearish momentum would keep getting stronger;

Secondly, the 14-period RSI shows the inclination to move to the 50 neutral zone in order to counterbalance the oversold situation in which the coin had been for the first part of February.

But given that altcoins are still holding strong, the pullback of Golem could be short-lived, after which the price would make an attempt at an immensely strong resistance level at $0.11, which held from April until July of 2019.