Having shaken off the blow that the mid-March panic-sell delivered to Golem (GNT), the coin began a slow yet steady recovery, which has been going especially well during the last 30 days. In that period of time, GNT restored its vigor and climbed 17% higher against USD and even had a better run than Bitcoin, by 3%.

In fact, the entire cryptocurrency market has been brimming with health recently, mainly because of the expectations related to the approaching Bitcoin halving, which will take place on May 12. For the past week, the market has been flashing mostly green, which also concerns Golem that received a 6% value boost. 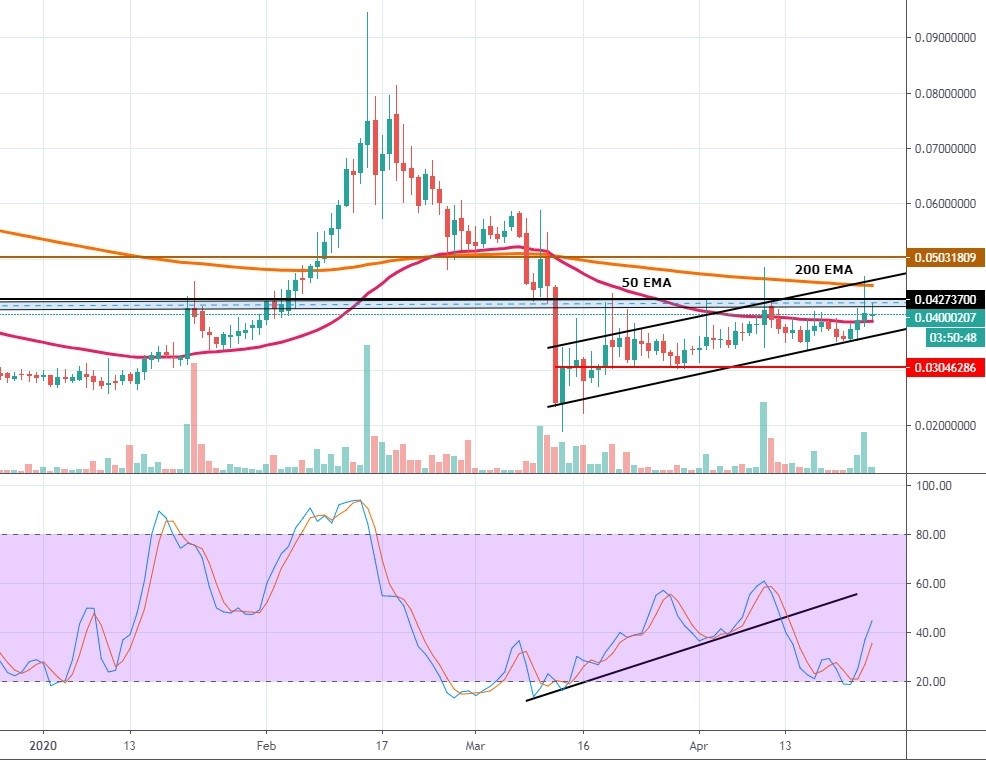 The daily time frame reveals that GNT has been a very obedient currency after the notorious event in March, moving from one higher high/lower high to another in a clean-cut uptrend structure. That must have been a period of comfortable trading, which could have come to an end because right now, the price has arrived at $0.42, the area of immense historical resistance with which GNT has been interacting very frequently since August 2019. And even when looking at this chart, one can clearly see that ever since the March price drop, Golem had punctured the area between $0.04 and $0.042 eight times but to no avail.

It comes to show that $0.42 is the territory where the bears are making their last stand at this particular juncture, though the next resistance level of similar fortitude is located not very far away to the upside, at $0.05, which should be GNT’s next price target on the way to reversing the immediate downtrend, although the currency has been in a macro downtrend since the market burst in 2018.

But before Golem even gets to $0.5, which, by the way, was the point when the moving averages formed the death cross, it needs to establish a foothold above the 50-period EMA, upon which GNT has to storm through the mentioned resistance area and then conquer the 200 EMA - a triple threat, overcoming which could be a daunting task since the price could easily get stuck between these three barriers for an extended period of time, or even get fiercely rejected.

In that case, traders should consider the possibility that Golem would wreck its tidy uptrend structure and descend to an area around $0.03. The realization of this scenario is likely to trigger a protracted consolidation, followed by another attempt at the “triple threat” region.

There are several factors that speak in favor of the successful move to $0.05, the first one being a substantial bullish volume which, although erratic and jumpy, is significantly larger than the cumulative selling volume from the past month. Secondly, Stochastic has made a strong jump off the floor at 20, which helped GNT to turn the 50 EMA into interim support.

It appears that a deviation from the uphill hike on Stoch allowed Golem to collect strength for a bullish punch. All in all, if Golem at least manages to break above $4.2 and set camp around 200 EMA, it would be the time to get bullish.