In the last article dedicated to Golem (GNT), we have predicted correctly that the price was to retrace to the support at $0.105, but what seemed as the retracement within the framework of the bull flag turned out to be the beginning of correction that took the price to its current level at $0.095, achieved after the average of 3% value degradation against the three major currencies: USD, BTC, and ETH, in a span of a week. 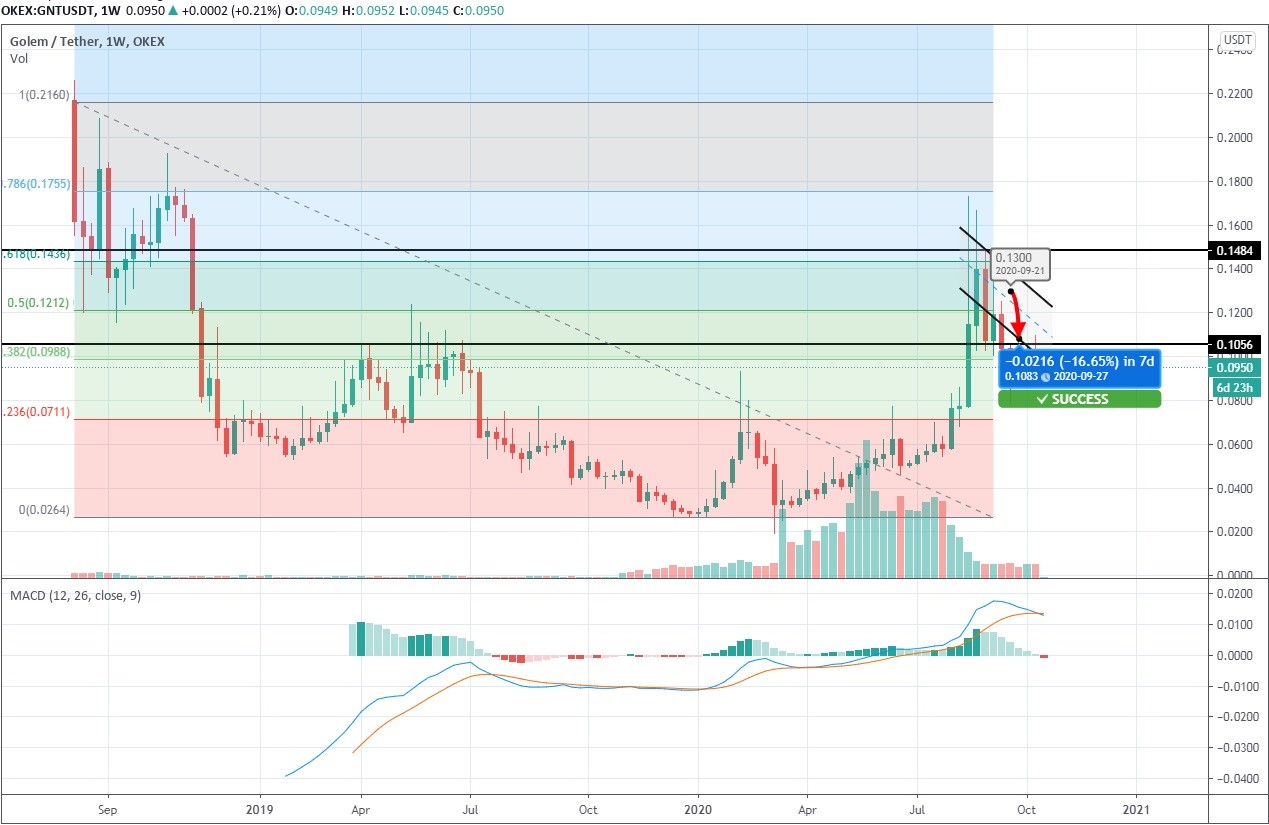 Nevertheless, when it comes to the price development on the macro scale, Golem seems to be rising slowly but steadily above the two-year bottom at $0.018 that was reached at the climax of the coronavirus-induced market crash in March. The historical chart tells us that GNT has already taken out the highs of 2019 and would be eyeing the psychological level at $0.2 in the long run. 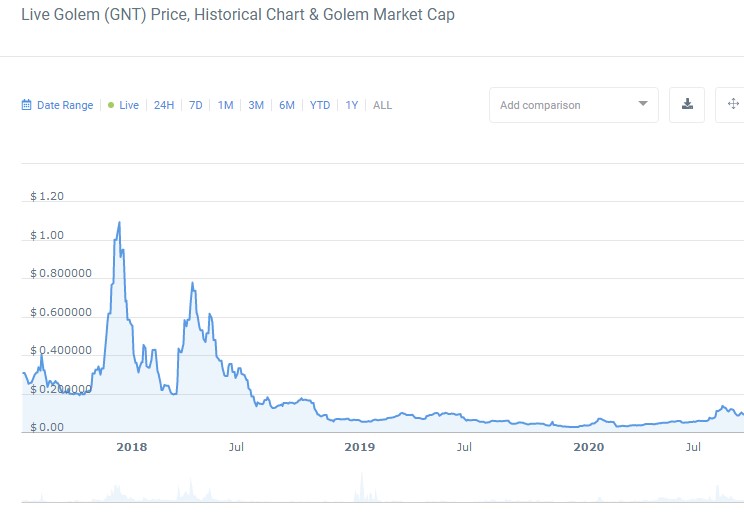 But for the time being, we have a bearish outlook with regard to Golem, at least until the price makes a comeback above $0.1. But that would be hard to achieve, given the noticeable decrease in average trading volume over the past 90 days from $15 million to the current $4.3 million that is a sure sign of the ongoing consolidation before a major break, which we reckon would occur to the downside.

The weekly chart reveals that the sellers have successfully flipped $0.105 from being a support to becoming a resistance that has been tested during each of the past three weeks - but to no avail - while maintaining the support at $0.088. 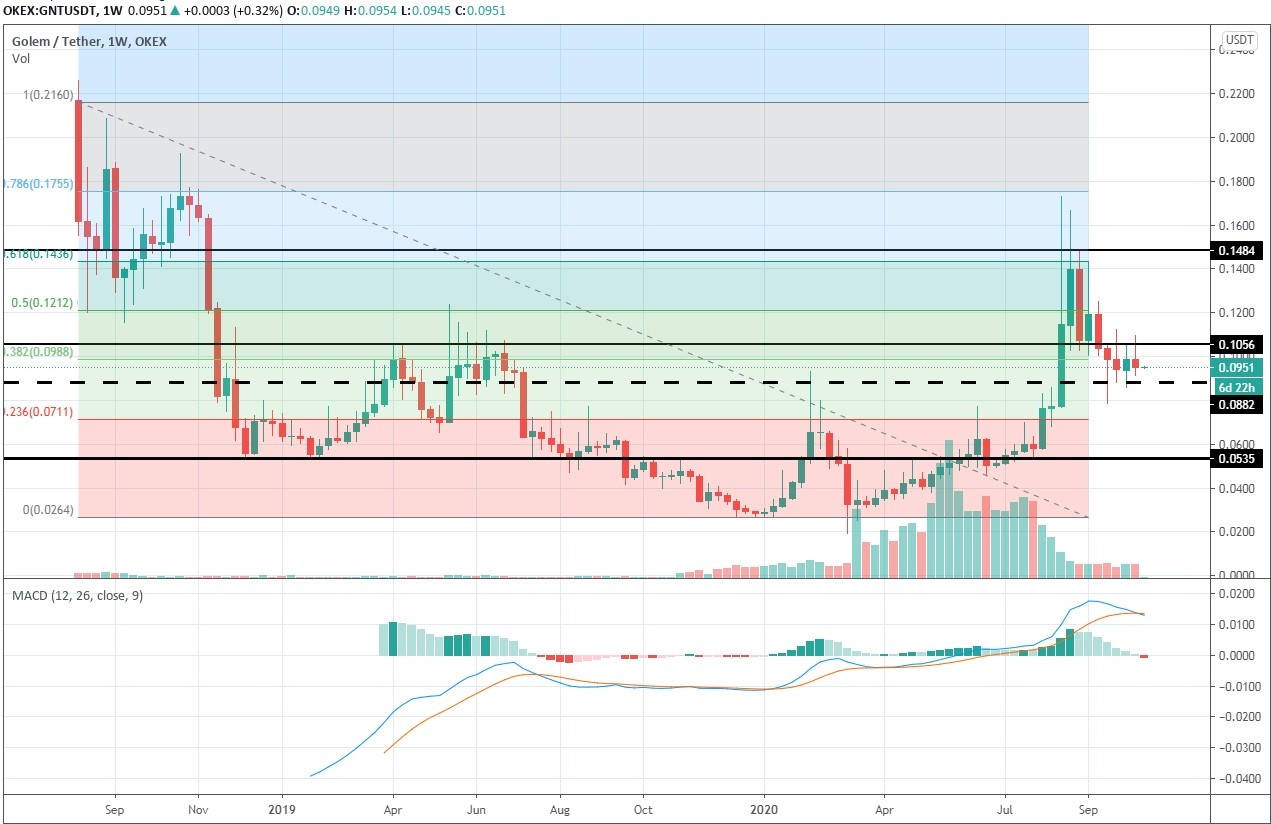 This dive was accompanied by the visible shrinkage of trading volume to the levels seen during the short bull rally at the dawn of the year. At the same time, MACD appears to have finalized its bullish phase, which lasted for ten months and now is deliberately going for the bearish crossover, the proper realization of which would provide the clear signal that the price intends to drop to 0.236 on the Fibonacci retracement grid or $0.07.

At that point, Golem would either enter the phase of protracted consolidation - given that MACD will get rejected at the zero line - or fall to the pre-rally price level, with the presumed support line being established at $0.053, whereas MACD will fully immerse itself into the bearish control zone. The bullish scenario provides for a push off the interim support at $0.088, followed by a quick spike to $0.12 that coincides with 0.382 on the Fibonacci retracement grid. 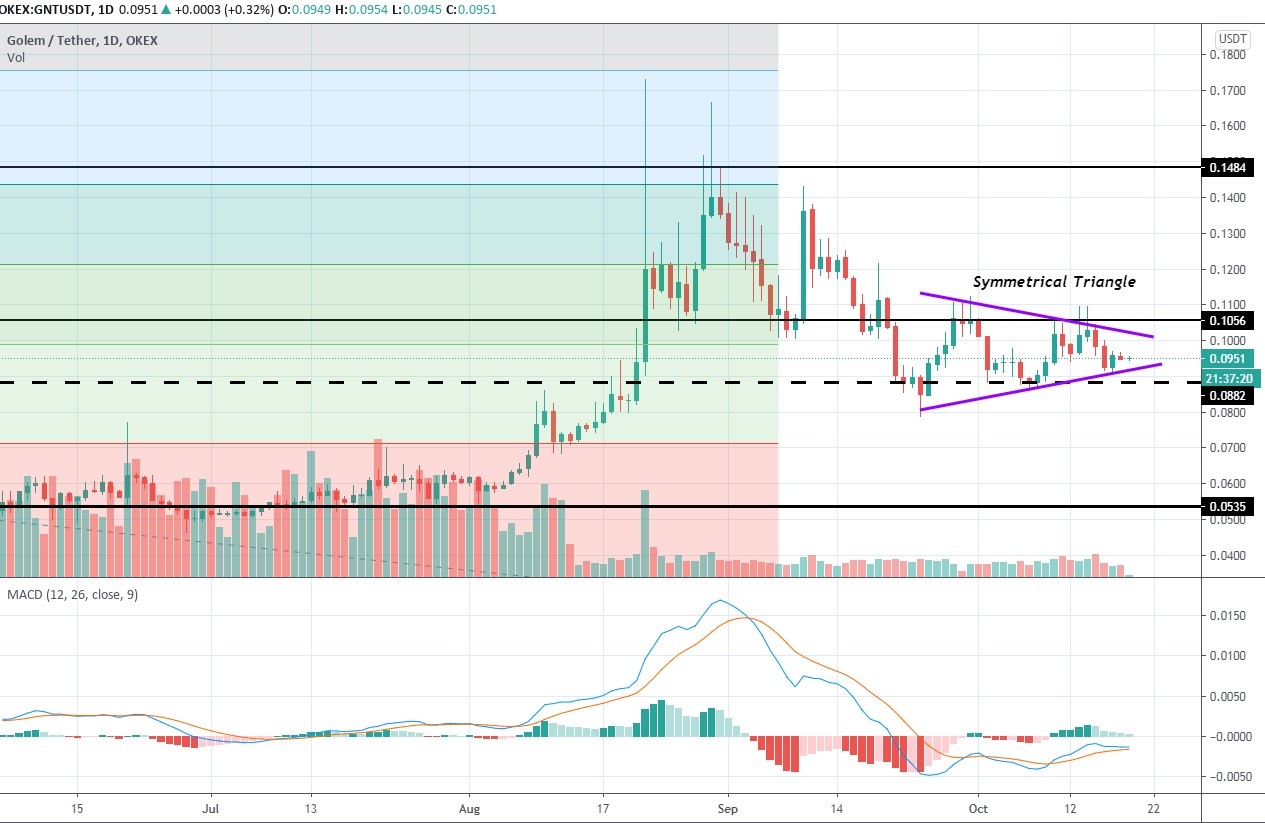 The price action on the daily time frame confirms that Golem is being locked in a tight range ($0.088 - $0.105) with an inclination to the downside, mainly due to MACD being in the bearish zone, though the situation will become clearer once the symmetrical triangle is being resolved.

The guidelines concerning trading Golem on this time frame are pretty straightforward: wait for the breach of either support or resistance as part of the symmetrical triangle resolution and look for the confirmation from MACD, as well as the increase in trading volume.