Throughout 2019, Monero and other privacy-oriented coins faced significant scrutiny from different governmental agencies and regulators, especially the US Financial Crimes and Enforcement Network (FinCEN). This bureau has come up with the so-called Funds Travel Rule that required financial institutions, including cryptocurrency exchanges, to collect and share information about the money transfers that exceed $3,000.

This initiative spurred controversy and even gave rise to rumors that certain cryptocurrency exchanges were to delist XMR and other privacy coins in order to remain compliant with FinCEN’s requirements and the AML/KYC rules in general. The Swiss regulator FINMA also took a negative stance towards privacy coins. Needless to say that the “prophets” like John McAfee were constantly blabbing about the total ban of Monero.

Nevertheless, the 10th cryptocurrency managed to deny all expectations of its looming demise and even put up a decent result in terms of performance against the three most popular currencies in this space.

As we can see, XMR ended the year in the green, being outperformed only by the most dominant cryptocurrency. That is undoubtedly the show of strength from the leading privacy coin, especially on such a negative news background, and a proof that it possesses plenty of vigor that could translate to significant gains in 2020. With the Monero Compliance Workgroup going above and beyond in its effort to prove that Monero is exempt from the Funds Travel Rule, the confidence in this coin should remain high, as confirmed by the steadily increasing number of transactions in that blockchain. 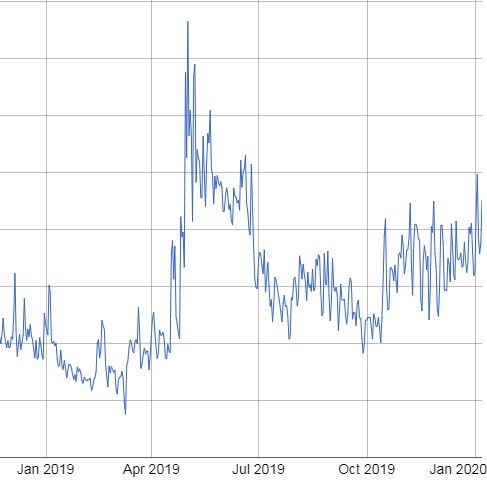 This year could prove to be very exciting for this coin as the Monero Research Lab published a proposition regarding the implementation of Triptych, a linkable ring signature that scales logarithmically instead of linearly, thus allowing for the radical increase in ring size. In simpler terms, with the introduction of Triptych, Monero could receive a drastic boost to its anonymity, which will surely increase the demand for this coin, thus its price.

XMR’s current price behavior and prospects in the near future

Taking a brief look at Monero’s price over the course of 2019, it is evident that it had been moving in an almost textbook-perfect bearish trend, making a series of lower-highs and lower-lows within the descending corridor. 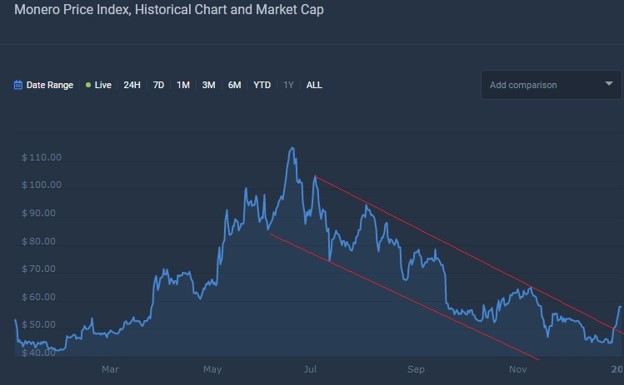 But come January 2020, XMR showed signs of a breakthrough that could signify the inception of a trend reversal. Over the last seven days, the coin recorded the impressive 28% gains, which is the best showing among the other top 10 cryptocurrencies.

On the daily chart in the XMR/USDT pair, the price has been moving in strides, having put up three big green candles and pushed XMR to the resistance at $60. 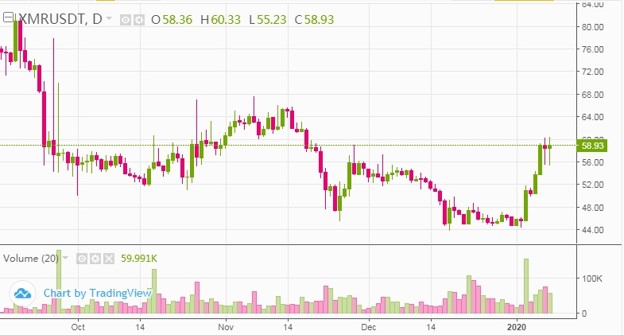 Monero displayed an equal aggressiveness against Bitcoin on a daily chart, although in that case, it was the recovery to a previous support level after a dip, without any significant boosts in the trading volume. 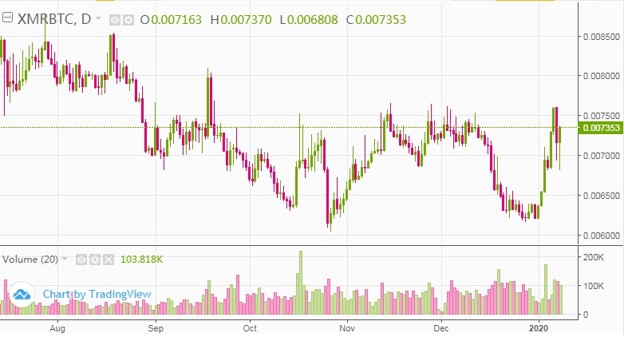 However, such a strong impulse should be followed by a cool down, which should begin soon, as the RSI and Stochastic oscillators on a daily chart of XMR/USDT clearly show. 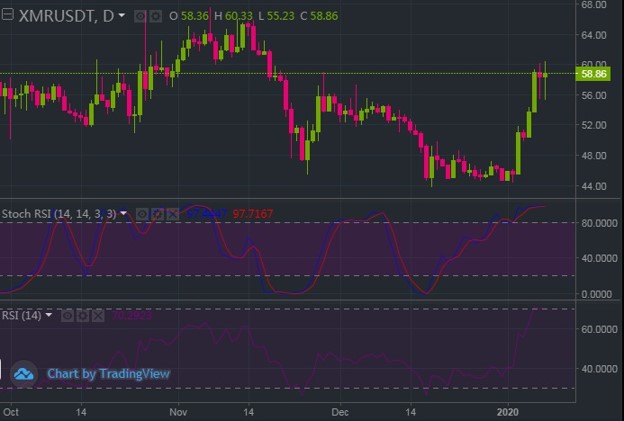 That is a textbook signal of the impending price decrease, though it could be a slight one since other indicators, such as the 9-day Hull Moving Average and 10-day SMA and EMA are suggesting going long on XMR.

The next seven days are going to be crucial for Monero, as we will find out whether this breakout turns out to be a true or a false one. Should XMR establish the support at $55 or break through the $60 line, we could witness more gains. Otherwise, the bears are likely to steal the initiative again.