The price of MIOTA has been booming for the last seven days, in concordance with the rest of the cryptocurrency market. Over that period of time, the value of the 22nd cryptocurrency with the market capitalization of $700 million surged by 32%, placing the coin in the 10th place, as of the time of writing, among the biggest hard-gainers of the first part of January.

The price sprint of IOTA was instigated not only by the general shifts in the market but also by the positive outlook on its fundamentals. According to the report published by Fundstrat, the New York-based market research agency, the ecosystem developed by the team behind IOTA could become home for nearly all payment gateways that involve machine-to-machine transactions.

The researchers claim that given its potential, the project could transform into a global player within the next 15 years, with a market capitalization of around $700 billion. The projected growth is based on the fact that IOTA’s system is tailor-made for the Internet of Things (IoT) that currently growing at a rapid pace.

The year 2020 could become a trampoline for MIOTA’s value because that’s when these solutions should be adopted as an industry standard, accompanied by the significant improvement of its Proof-of-Concept (PoC). Besides, the IOTA company has recently partnered with Software AG, a heavyweight corporation in the field of software development.

If all these plans and concepts are put into practice, 2020 could become the breakthrough year for IOTA, which means that this coin should be considered for opening long positions, certainly after its price goes through an imminent correction that should follow after the rally.

The short-term prognosis for IOTA

Starting from January 3, bulls have been in full control of IOTA’s price trajectory, having taken it to the heights of $0.259, as of the time of writing, although it is still way too far from the rock-hard resistance line that the coin should meet once it reaches the $0.28 area. The 1-hour IOTA/USDT chart below shows the dynamics of the currency’s price action within the latest period. It has been moving within the confines of the ascending rectangle, making for comfortable trading experience. 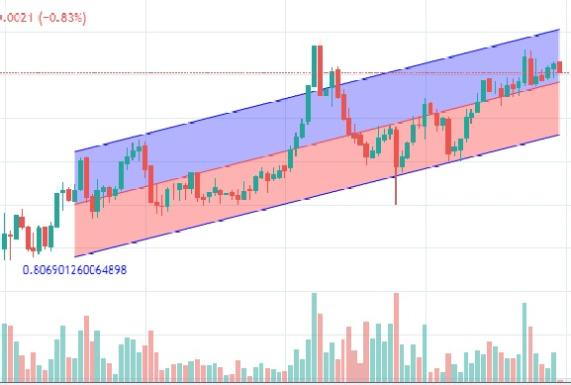 However, as already mentioned, MIOTA has a lot of breathing space right now, though it has already crashed one point of resistance at $0.22, tested it twice, and then turned into support. 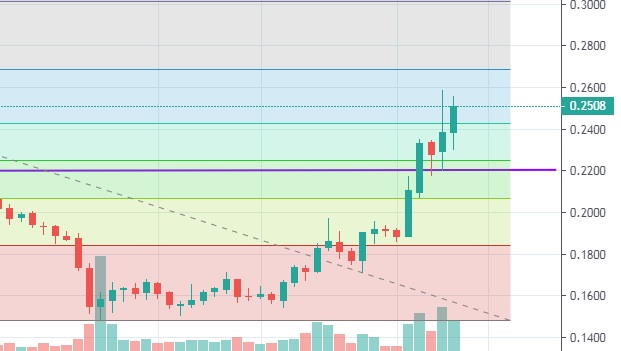 The buyers have also been disregarding the Fibo retracement level, breaching through as many as four of them in one swing. Although the 0.786 Fibo level will prove to be the hardest for IOTA since it coincides with the said resistance. 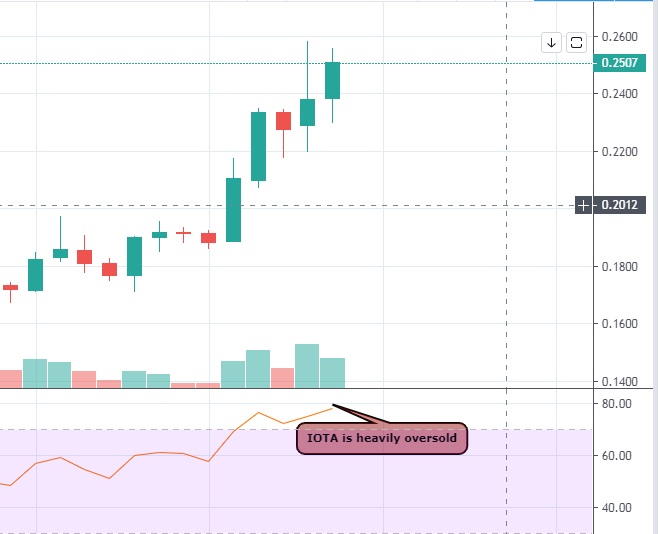 The continuing bullish dominance is under question now, given that the 14-day RSI is currently almost at the maximum oversold condition, which signals about the possible shift in price direction. But the most probable scenario is that MIOTA will begin forming a bullish flag by trading sideways for the coming 4 to 6 days. Upon reaching the point of a breakthrough, the price should go for another spike and test the resistance at $0.28.