Ethereum (ETH) is the second-largest cryptocurrency in the world, at least when it comes to the size of its market cap. It is also considered by many to be the second most important coin ever to be created.

This is not only due to its popularity and m.cap size, but also because of the fact that it transformed the way we see and use cryptocurrency and blockchain technology. Before ETH, blockchain was simply seen as an underlying tech for cryptocurrencies. Ethereum turned it into a development platform, showing to the world that blockchain has infinitely more potential than simply serving as a platform for making crypto payments.

The attention shifted towards it, and crypto became its fuel, at least when it comes to projects that, like ETH, serve as a development platform, or have a similar purpose.

However, what we are interested in today is Ethereum's price, and where it might go in days, weeks, and months to come. However, to do that, we must also include its past, and see if there are any patterns that might indicate the coin's future behavior.

As you probably know, Ethereum is not exactly a young coin anymore. It is younger than Bitcoin, but then again — every other altcoin is. ETH was launched in 2015, but we still can't say that it is young, since it is older than the majority of the crypto market. It is a coin of the second generation, and the most important member of this generation, at that.

As mentioned, it was launched in 2015, in early August. At that time, its price was at around $2.77. Soon after that, however, it dropped below $1, and it spent the rest of 2015 below this level. It only started growing in 2016, as the crypto market started expanding, and Ethereum's potential was realized. During 2016, however, the coin's price was still going only as far as $10 for the majority of the year.

However, the ability to develop coins on the ETH network and not have to launch a blockchain for each individual project first, finally brought attention to it in 2017. Everyone who had an idea regarding cryptocurrencies used this unique ability, and Ethereum became a star of the crypto industry almost instantly. 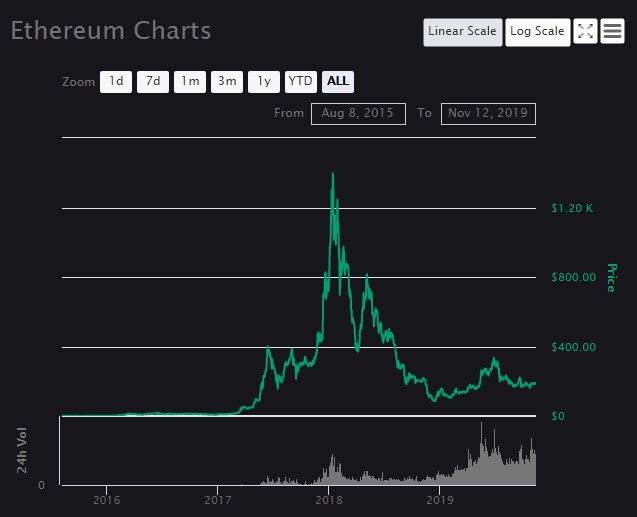 It grew throughout the entirety of 2017, breaking one resistance after another, finally hitting the ceiling at $400. After several attempts to break through this resistance, all of which have failed, Bitcoin finally started its legendary surge, which was what allowed ETH to follow and go beyond $1,360. After that, however, the coin dropped during the crypto winter, going all the way down to $100 at some point.

Its performance improved in 2019, but the coin still did not even manage to reach its old resistance at $400. It certainly looked like it is on the way, but that was before the bull runs of 2019 had ended in the second half of June. Since then, ETH has been holding on rather well, its drop stopped by support at $180.

Where will ETH go from here?

Despite the negativity and skepticism that is largely present in the crypto market, Ethereum is very likely going to have a successful future. The coin has proven that it is innovative and valuable, that it has competent leadership and great technology.

Many would say that it is outdated and that others, like EOS, could overtake it and become the infamous 'Ethereum killer.' However, no single crypto stepped up to take that title for itself, and while EOS and TRON may be the closest, Ethereum likely won't allow it.

As you may know, Ethereum is expected to see its long-awaited upgrade, which will transform it into Ethereum 2.0. Once that happens, it will abandon PoW consensus in favor of PoS, and it will become faster, stronger, more competent, and likely even much more valuable. This is expected to happen only a few months before Bitcoin halving, which is also expected to push the price of BTC in months prior to the event.

In other words, while ETH will be exploding thanks to the new update, as soon as the hype passes, the coin might see another BTC surge that will lead it further up, just like it did back in 2017. Only this time, there might not be a bear market that will knock it down, which might leave ETH way beyond the $1000 mark. While none of this is for certain and should be taken as mere speculation, it is also a very large possibility, which is worth keeping in mind.