If there is an alternative cryptocurrency that deserves to be in every trader’s portfolio, except for the ones that consider themselves die-hard Bitcoin maximalists, it should definitely be Ethereum because this coin has recorded great strides since the first days of 2020.

Over the course of the previous 30 days, the second cryptocurrency gained 58%, rivaled only by Tezos (XTZ), that had put up an amazing 123%. Last week, however, wasn’t at all fruitful for the cryptocurrency market as a whole as it has been in a moderate correction across the board, with nearly every coin decreasing in value by an average of 10%.

Nevertheless, it is a general belief within the trading space that ETH will become a star gainer in 2020, especially if Vitalik Buterin and the entire Ethereum Foundation would make substantial progress in the development of Ethereum 2.0, an upgrade that should resolve all underlying issues with the state of the network, especially the ones that concern scalability.

Once fully launched, the upgrade will have an unparalleled impact on the efficiency and sustainability of the Ethereum blockchain, thus making the coin arguably the best one, fundamentals-wise. Needless to say that the price of ETH will follow the suite. But for the time being, Ethereum has taken time out from rallying, and now appears to have entered the state where its price is moving sideways.

Price action on the charts

Despite the fact that ETH, along with the overwhelming majority of cryptocurrencies, has been mostly in the red for the past few days, the weekly ETH/USDT chart shows that the coin is still maintaining the bullish momentum. Moreover, the price has been moving upward ceaselessly for the past seven weeks on the back of the gradually increasing trading volume, which further indicates that the bulls remain in full control of this market. 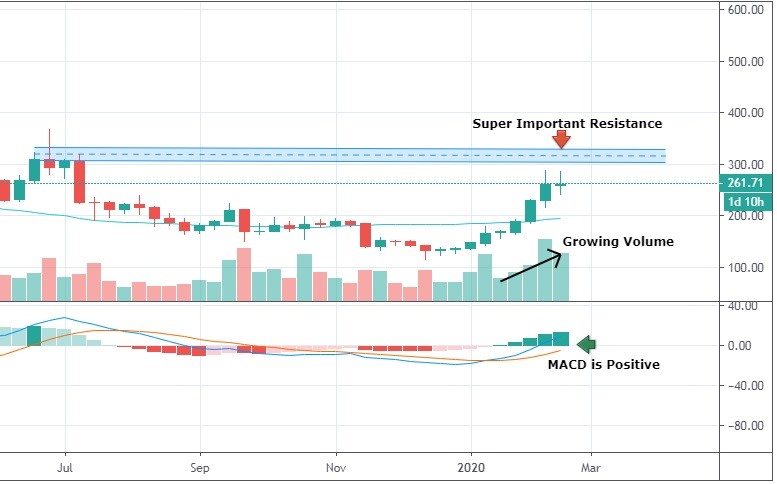 Two weeks ago, the price moved above the 200-period moving average, which has always been a sign of bullish intentions. Given the current sentiment on the market, ETH is bound to stay above that line in the foreseeable future.

In the near term, Ethereum should test the vastly important psychological resistance at $300, which has been holding firm since last summer’s minor bull market. It might happen with the next weekly candle, or the one after that, since it’s the level that most traders have been looking up to for quite some time. The price might not crack the resistance at the first try. In that case, traders should prepare for a retracement to around $250. However, the MACD hints at the underlying pressure by the bulls, as it is about to cross the zero-line to the upside, plus the MACD line is moving further away from the signal one on the back of a protruding histogram.

On the daily chart, Ethereum has also seen the formation of the golden cross pattern, which is considered a prerequisite for a strong bull market. 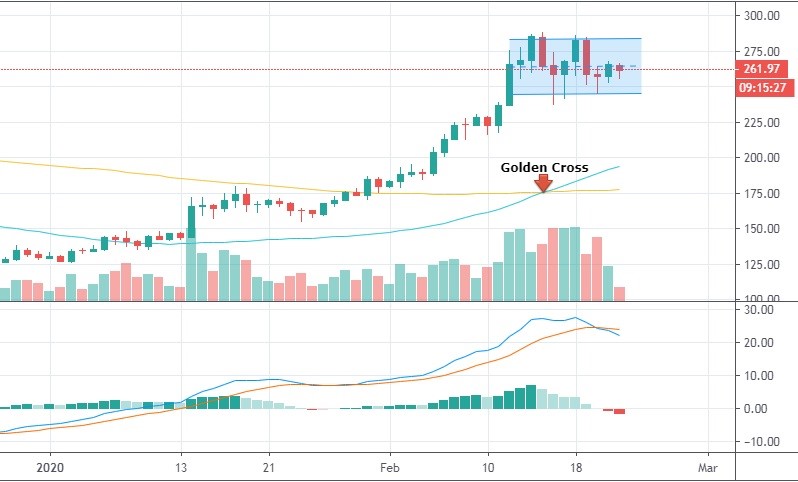 But, as expected, that pattern alone didn’t send the price into a stratosphere right away. Instead, ETH began trading sideways, jumping back and forth between the weekly low at $245 and the corresponding high at $286. The MACD line has crossed the signal one from top downward, signaling about the possible price decrease in the following several days.