It’s dark time now for the hard fork of Ethereum as this altcoin has suffered the third 51% attack in a span of a few months. In our last ETC price prediction article, we covered the devastating consequences of the second attack on the network, which saw the perpetrator double-spending over 800,000 ETC that was equivalent to $5,6 million at that time.

The third attack occurred on August 29, during which the hacker had compromised around 7,000 blocks, which corresponds to two days of active mining. Ironically, the hack took place a couple of weeks after the team released the proposal concerning the network security upgrades. It forced ETC Labs to bring the overall network hashrate down to just 3% while testing the possible security solutions, one of which could be the toughening of regulations concerning the rented hash power from providers like NiceHash that was used to carry out the attacks.

This situation has greatly undermined the trust of all market participants in Ethereum Classic - so much so that OKEx, a reputable cryptocurrency exchange with reported liquidity of $1.54 billion, warned ETC Labs about the intention to delist the altcoin if the problem won’t be resolved in the near future.

Ethereum Classic is back to the March price levels

There is no doubt that Ethereum Classic is the most aggrieved top-ranked cryptocurrency that suffered major blows not only to its price, but also the market capitalization that decreased from almost $800 million to $600 in a span of a month. Over the same period of time, the price of ETC dropped by 27% against USD, 20.88% as compared to Bitcoin, and 20.33% against Ethereum - the defeat on all fronts. On the yearly scale, ETC is also in the red: -16.95% in the USD market and -23.1% in comparison to BTC. 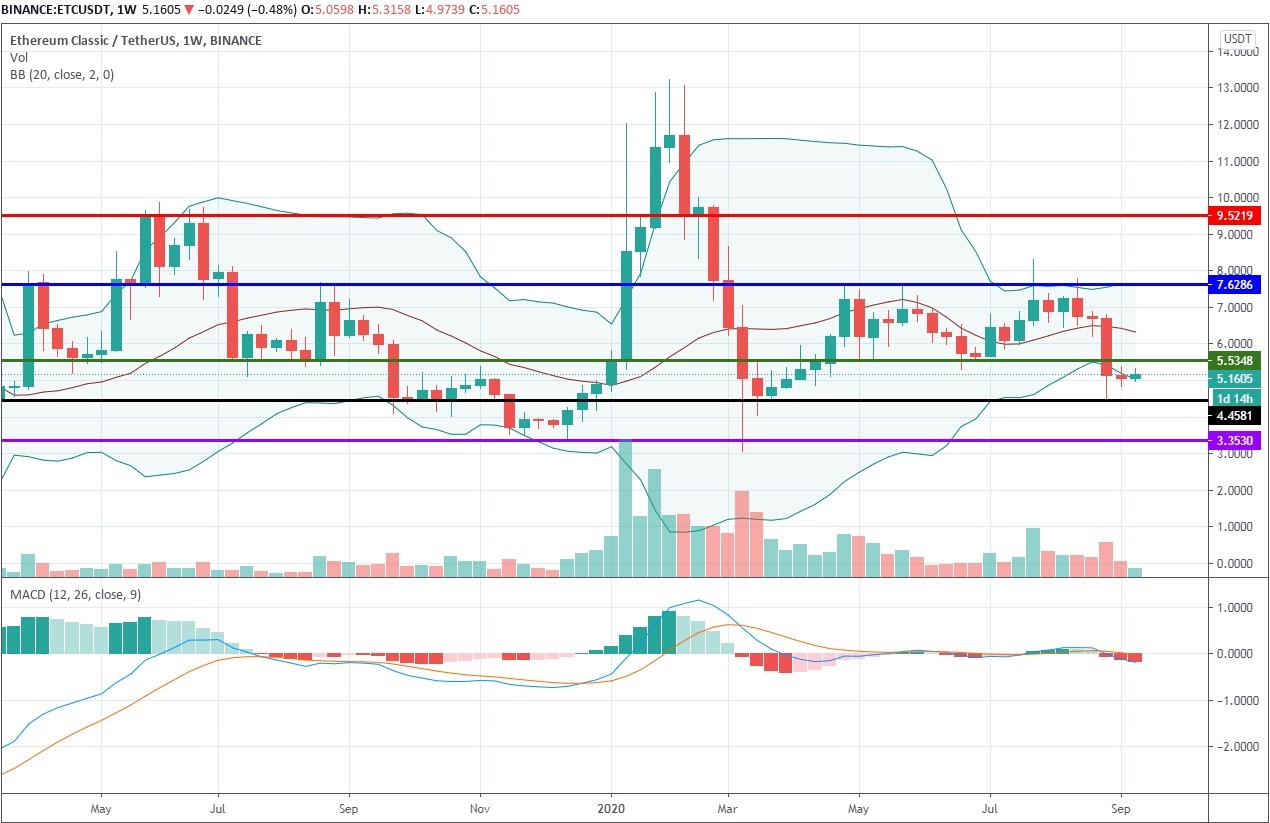 Unfortunately for the holders of ETC, the bearish price action seen at the end of August was exacerbated by the flash crash in the first days of September that brought the price from $6.67 to $4.4 (34.2% loss) in a matter of two weeks, thereby taking the 33rd cryptocurrency back to the price level seen in March during the meltdown caused by the coronavirus pandemic.

Given that ETC tends to respect the established support/resistance levels, as evident from the weekly chart above, the recent drop has only increased the possibility of Ethereum Classic traveling all the way down to $3.35, the multi-month support that also serves as a pivot point before every major bull rally.

Nevertheless, the chance remains that the buyers would be able to hold on to the current support levels at $4.45, should the team present a viable solution to security issues, and the overall situation on the market remains stable or bullish.

However, the leading indicators suggest that the sellers don’t intend to give up the control over the market as MACD has already crossed the zero line to the downside without being rejected, thus amplifying the bearish momentum. Also, it appears that ETC is going to exit the Bollinger Bands squeeze to the downside, which usually entails a violent price drop. In this case, the price could crash to $3.35 or even $3 over the next four to six weeks.